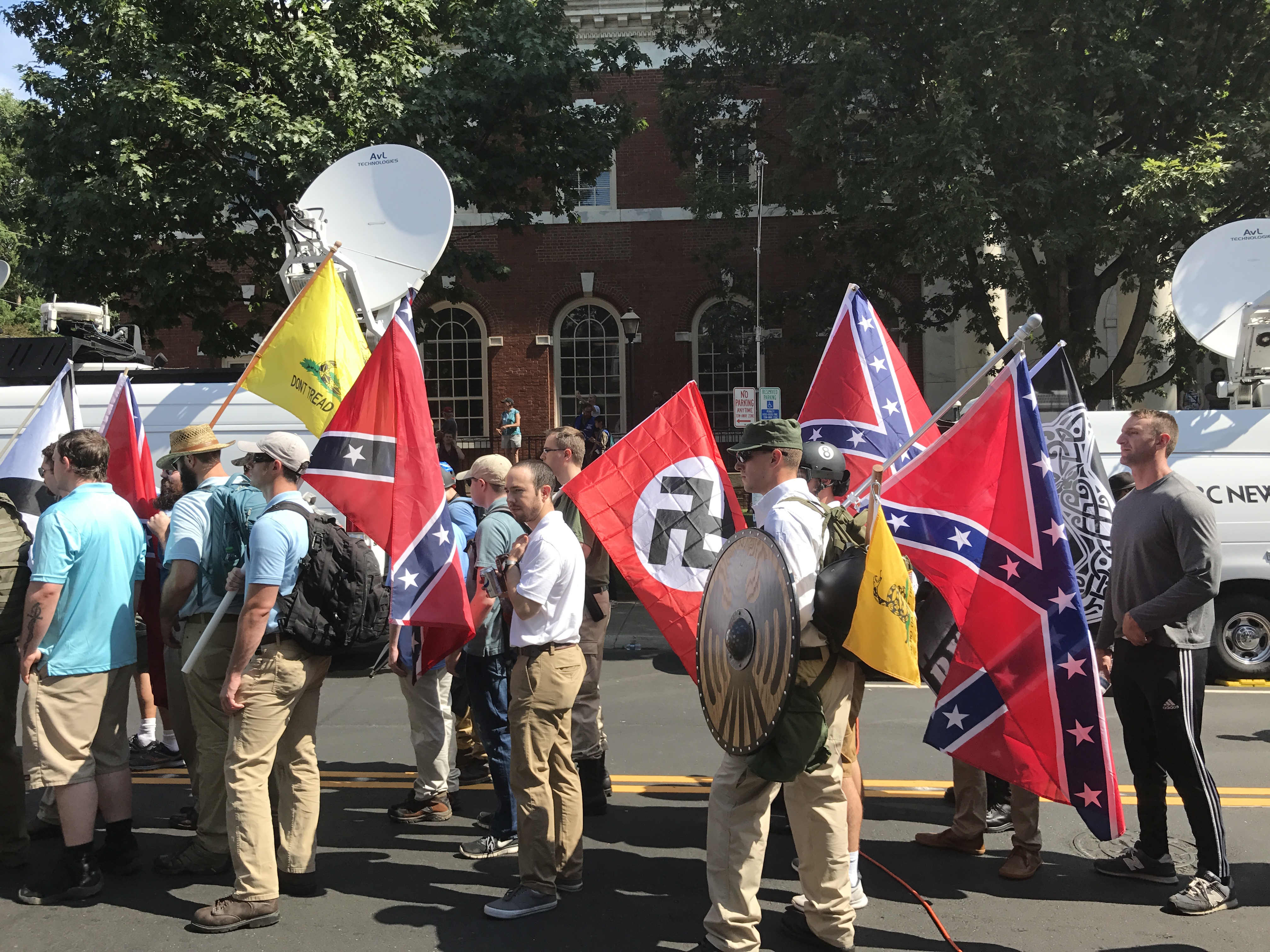 In August 2017, a group of white supremacist groups convened in Charlottesville, VA for ‘Unite the Right,’ one of the largest and most violent gatherings in the U.S. in decades. It brought together white supremacist groups including the alt right, neo-Nazis and the Ku Klux Klan. The gathering’s stated goal was to save the statue of Confederate General Robert E. Lee because, like other places in the South, there is growing controversy about the symbolism and removal of public monuments celebrating leaders of the Confederacy. Hundreds gathered on Friday evening and Saturday to broadcast their viewpoints and ideologies, including chanting, “blood and soil” and “you will not replace us.” They carried torches, homemade shields, weapons and Confederate and Nazi flags. Many brandished Nazi salutes. After continued clashes with their opponents, a car plowed into a crowd of peaceful counter-protesters, killing one person and injuring nineteen. A state of emergency was declared by Virginia’s Governor.

In the aftermath of this event, there have been many public conversations about racism, anti-Semitism, white supremacy, the alt right and the First Amendment.

White supremacy is defined as follows:

A term used to characterize various belief systems central to which are one or more of the following key tenets: 1) whites should have dominance over people of other backgrounds, especially where they may coexist; 2) whites should live by themselves in a whites-only society; 3) white people have their own "culture" that is superior to other cultures; 4) white people are genetically superior to other people.

White supremacy is more encompassing than simple racism or bigotry. Most white supremacists today believe that the white race is in danger of extinction due to a rising “flood” of non-whites, who are controlled and manipulated by Jews, and that imminent action is needed to “save” the white race. Events such as lynching, hate crimes, racial slurs, swastikas and burning crosses are primarily what people think of as white supremacy. However, many believe that implicit forms of racism like racial profiling, the school-to-prison pipeline, employment discrimination, voter suppression and Confederate monuments create a culture that can give rise to white supremacy.

The alt right (short for “alternative right”) is a segment of the white supremacist movement consisting of a loose network of racists and anti-Semites who reject mainstream conservatism in favor of politics that embrace implicit or explicit racism, anti-Semitism and white supremacy. Many seek to re-inject such bigoted ideas into the conservative movement in the U.S. The alt right also includes many racist users of image boards and message forums who enjoy harassing or “trolling” people who disagree with their views.

(The "Related to this Resource" provides information that address these questions.)