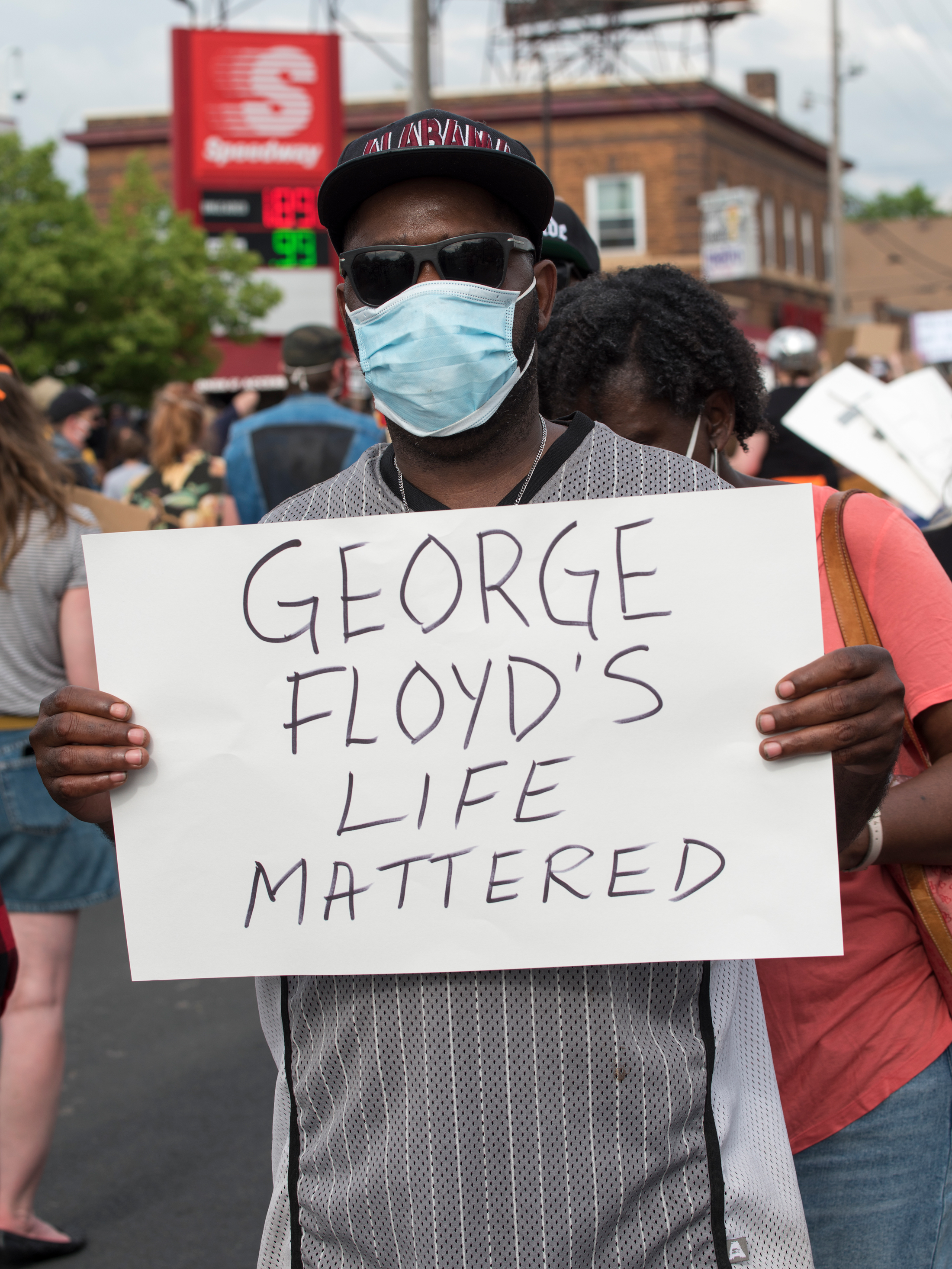 Thousands protest against police violence and call for justice for George Floyd. Minneapolis, Minnesota, May 26, 2020.

On May 25, 2020, George Floyd, an African American man, was killed while being arrested by the police. A bystander video recording of the incident showed that a white police officer pinned Floyd to the ground while he was handcuffed. The police officer’s knee pressed into the back of Floyd’s neck for more than nine minutes, even after Floyd lost consciousness. On the video, Floyd was heard saying, "Please, I can't breathe. My stomach hurts. My neck hurts. Everything hurts. … (I need) water or something. Please. Please. I can't breathe, officer. … I cannot breathe. I cannot breathe."

A video taken by a bystander of the incident was shared widely on social media. This led to community and national outrage, an F.B.I. civil rights investigation and the firing of the officer, Derek Chauvin and three other officers who were also at the scene. On May 29, 2020 Chauvin was arrested and charged with third-degree murder and manslaughter. On June 3, the charges against Chauvin were upgraded to second-degree murder and the three other officers were charged with aiding and abetting murder.

The murder trial of Derek Chauvin began on March 29 and concluded on April 19, 2021, when the defense and prosecution delivered their closing arguments. On April 20, 2021, the jury announced a verdict of guilty on all three counts in the murder of George Floyd. Chauvin was denied bail and taken into custody; his sentencing is to take place in eight weeks.  After the verdict was read, Philonise Floyd, George Floyd’s brother said, "I was just praying they would find him guilty. As an African American, we usually never get justice."

Protests Across the Country

The murder of George Floyd spurred what has been called the largest protest movement in U.S. history; data suggest that up to 26 million people in the U.S. participated in demonstrations. There has also been widespread protest and activism around the world. Proposed legislation followed as the George Floyd Justice in Policing Act of 2020 was introduced in Congress. The bill's stated goal is to "to hold law enforcement accountable for misconduct in court, improve transparency through data collection, and reform police training and policies."

Despite having video recordings of many of these deaths, it is very rare for police officers to get arrested, prosecuted or convicted for excessive use of force. This perceived lack of accountability has led to a public outcry for justice.

Black Lives Matter is an activist movement which began as a hashtag (#BlackLivesMatter) when in July 2013, white civilian George Zimmerman was acquitted in the shooting death of Trayvon Martin, an unarmed African American teenager killed in Florida. The Black Lives Matter movement became more widely acknowledged and highlighted after two 2014 high-profile deaths of unarmed African American men (Eric Garner in Staten Island, NY and Michael Brown in Ferguson, MO). Neither of the police officers involved in their deaths were indicted (i.e., formally charge with a crime).

Racism shows up in all aspects of our lives and society: in interpersonal communication, through discriminatory policies and practices, in biased language, and in our laws and institutions (e.g., education, media, employment, government and the criminal justice system).

Many see Floyd’s death as an example of systemic racism, referring to the way race disadvantages people of color in the criminal justice system. Black and Latinx men are disproportionately represented in all levels of the criminal justice system, from arrest to sentencing to death row. Moreover, research shows that African American people are 2.5 times more likely to be killed by police than white people.

How Hate and Bias Escalate

On the same day that George Floyd was killed, another incident occurred in Central Park in New York City. Christian Cooper, a Black man, was birdwatching when he encountered an unleashed dog. He asked the dog's owner, Amy Cooper (no relation), to put the dog on a leash, as the park rules require. When she did not, he began to film her on his phone. In response, Amy Cooper said she would call the police, stating "I'm going to tell them there's an African American man threatening my life" while pulling out her cell phone and calling 911.

While these two events appear to be unrelated, they both demonstrate a very important concept: when left unchecked, hate and bias can escalate and lead to dangerous, and sometimes deadly, outcomes.

The Pyramid of Hate illustrates how the levels of biased attitudes and behaviors grow in complexity from the bottom to top. Like a pyramid, the upper levels are supported by the lower levels and it becomes increasingly difficult to challenge and dismantle as behaviors escalate.  Bias at each level negatively impacts individuals, institutions and society. When bias goes unchecked, it becomes “normalized” and contributes to a pattern of accepting discrimination, hate and injustice in society.

Amy Cooper’s anger and bias led her to threaten Christian Cooper with the bias she assumed the police would have when she described the man who was threatening her as African American. This is a situation that could have easily escalated if the police arrived on the scene and engaged in a confrontation, or worse, with Christian Cooper. All too quickly and pervasively, the escalation of bias and hate has led to violence and the deaths of George Floyd and many others.

(See the Additional Information section for articles and information that address these questions.)