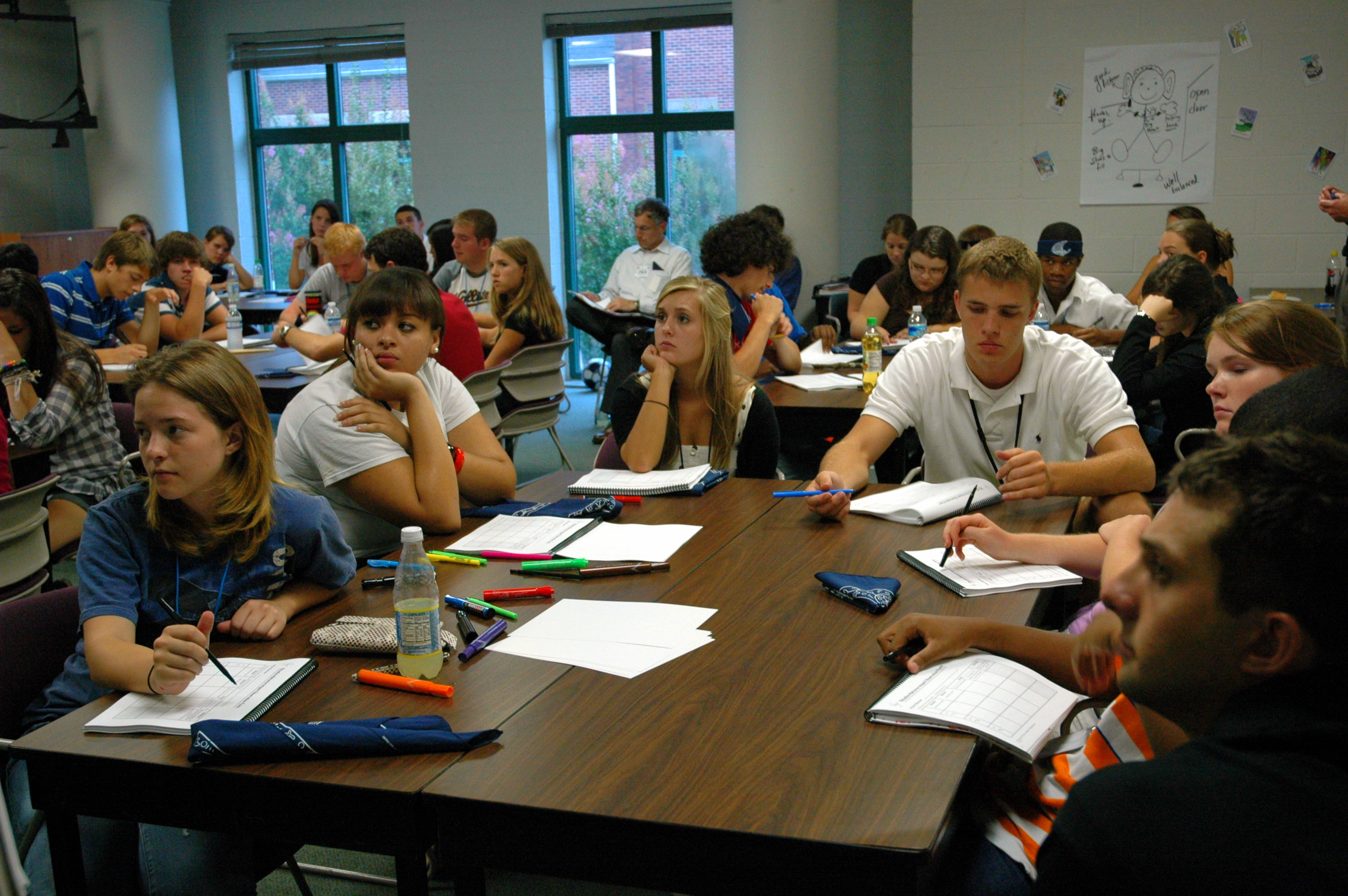 Race and racism are important topics to bring into your classroom. Because race is part of our public conversation and integrated into so many aspects of our world, young people want to and should be part of that conversation, no matter their race. White students in predominantly white classrooms should be discussing race for those reasons and because they are members of a multicultural society and world. Sometimes teachers feel reluctant to raise the topic of race especially if they are teaching in an all or predominantly white community. Teachers may be concerned that students bring their own assumptions and stereotypes, will hold back for fear of saying the “wrong” thing or bias will emerge and will be hard to facilitate and contain. Also, teachers may fear pushback from administrators and parents who feel they shouldn’t talk about it at all.

Below are tips and strategies to consider when teaching predominantly white students about race and racism.

Students, and in particular white students, sometimes don’t participate in discussions about race because they feel inadequate, worry they’ll be mocked, are embarrassed by their lack of knowledge or concerned that strong feelings will arise. Many may think the topic isn’t relevant to them. When engaging in any conversations about tough topics, it is critical to set up group guidelines or agreements to promote a classroom environment that is safe and respectful. Do this collaboratively with students and make sure that the following areas are discussed: listening and interrupting, how to deal with strong emotions, establishing trust, confidentiality, sharing “air time” and dealing with differences or disagreements. Further, from the beginning establish an environment that allows for mistakes. Because we are products of a biased society, students may not be cognizant that everyone has biases and holds stereotypes. This should be explained to them explicitly. Assume good will and convey to students that they should do the same. Find ways to inspire students to challenge themselves and their assumptions by asking open-ended questions.

A safe learning environment doesn’t mean you and your students will or should be comfortable with every discussion. Be prepared for these conversations to potentially be messy and complicated. They may not end as you expect they will. You can remind yourself of this and share that understanding with your students so you manage everyone’s expectations. It is helpful to remember and share with students that often deep learning, the kind that is lasting and long-term, comes when things are uncomfortable or “sticky” and you are able to work through those things. That’s the “aha” or epiphany moment. It may also be helpful to explain to students that often when things are complicated or when there is a conflict, if things are handled well, there can be a higher understanding or improved relationships on the other side.

3. Clarify that the goal is not to be “colorblind.”

The goal of teaching about race and racism is to help students understand the historical context and current manifestations of racism in the U.S. There are many white people who believe the best way to eliminate racism is to not talk about it and not notice racial differences at all (i.e. be “colorblind”). They may want to tell young people not to notice differences because they conflate noticing differences with having bias. It may also be a way to avoid dealing with discussions of race because they are uncomfortable. It is completely natural to notice race and other physical characteristics; telling children not to see it is incorrect and confusing. Let students know that noticing differences does not promote bias—judging and discriminating based on race does. Further, it’s important to acknowledge that white is a racial identity and even explore with students what being white means to them. You may also want to share with parents that you are talking about these issues because some white parents may believe that talking about race makes them or their children racist.

4. Acknowledge that learning about race and racism is a process.

It is often the case that white people who have always been in the majority do not think about their own racial identity the way that people of color often do. Recognize that learning about race and racism is a process because many white students may not have had the opportunity to reflect on and discuss it. They will come with bias and misinformation, as we all do, and it will take time for them to develop their own understanding and insights. Make it clear that this can be a lifelong process and that one is always learning, including yourself, and that you will be learning together. Introduce less complex topics at first and from the beginning, present and use accurate terminology. At the same time, don’t sugarcoat or simplify language or concepts. Defining words and the language of race and bias can be one of the first things you do which can include differentiating prejudice, bias, discrimination, racism and implicit bias. In the beginning, establish the fact that we all have a race, and they are included in that. Sometimes white students think that race doesn’t apply to them and includes only people of color.

5. Provide opportunities to learn about others and foster empathy.

Regardless of whether or not the racial diversity of our larger society is represented in your school, it is important to bring diverse voices and perspectives into the classroom in other ways besides personal sharing. This is particularly true if you have a predominantly white school and you are talking about race. Use children's books, short videos, movies, literature, stories by teens, or arrange for a video chat to expose students to other voices on race as this fifth grade teacher did. As the goal is to dispel stereotypes—not perpetuate them—be sure to review these resources in advance. Exposing white students to people who represent different racial groups can also build empathy as they learn and better understand others’ lives, experiences, perspectives and feelings.

The term “white privilege” is one that often produces anxiety and defensiveness among white people, including students. At the same time, if students are going to engage in conversations about race, privilege has to be on the table. The goal of a discussion about white privilege is not to make anyone feel guilty for who they are or defensive about their lot in life. The goal should be to help students understand and analyze issues of power and privilege as they relate to racism. One way to start the conversation is to talk with students about the ways bias manifests in institutions (i.e. discrimination). Explain that bias can impact people in two ways: by discriminating against some or advantaging others, depending on race or other aspects of identity.

Define white privilege as: “unearned and often unseen or unrecognized advantages, benefits or rights conferred upon people based on their membership in a dominant group (e.g. white people, heterosexual people, men, able-bodied, etc.) beyond what is commonly experienced by members of the non-dominant group.”

Another angle to discuss privilege is to talk with your students about the ways they feel disempowered or discriminated against as young people, often through ageism directed towards them. These can include things like not being allowed to do certain things they think they should be allowed to do; assumptions adults make about them; or discriminatory acts that target them. Students can reflect on the ways that they, as young people, lack privilege in these situations. This discussion will help them understand the concept of privilege without getting defensive and will help to foster empathy. You can then make the connection to white privilege and since you’ve set the groundwork, hopefully the leap to white privilege isn’t too far a reach for them. It will be important to identify dominant identities (i.e. being white) because students may not accept that they have white privilege by saying they belong to another marginalized group (“but I’m gay, poor, female”). While that may be true, it doesn’t erase their white identity.

7. Connect to ally behavior and engage in social justice.

As your students discuss race, some of them may be interested in addressing the racism they have learned about, both in their interpersonal relationships and in society. Helping your students understand what it means to act as an ally and learning the different ways to engage in ally behavior is an important next step. White people can act as allies by identifying racism when they see it, calling it out and challenging it in a myriad of ways. You can help to facilitate this process by giving students an opportunity to explore how to act as an ally and practice different strategies—both interpersonal or on a larger stage by getting involved in activism. There a wide variety of ways to do this including educating others, online activism, advocating for legislation, protesting, creating public awareness, etc. Convey a message of critical hope that when people work together—in the past and in modern times—they can make a difference and improve our society and world.