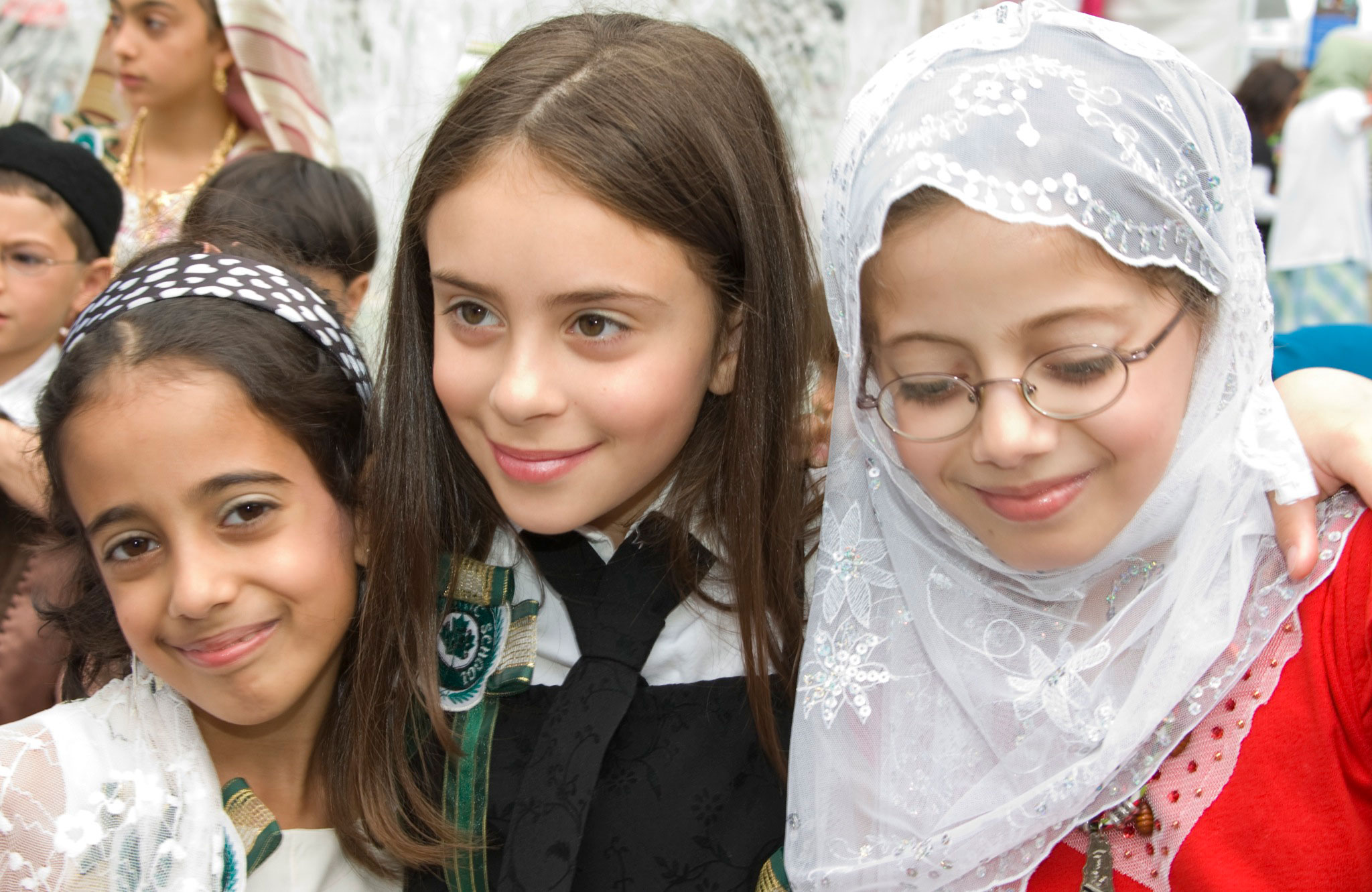 There are 1.8 billion Muslim people worldwide and an estimated 3.45 million Muslims living in the United States. Islam is currently the second largest religion in the world next to Christianity. Despite the fact that there are so many Muslims in the world, in many places there is a lack of understanding about Muslim people and Islam. In addition, the increase in anti-Muslim rhetoric and the unfortunate conflation of terrorism with Muslim people contributes to biased attitudes and reinforces stereotypes. As a result, Islamophobia—the fear, hatred and discrimination of Muslim people—is manifesting itself in personal biases, rhetoric, education, politics, hate crimes and more.

This resource is intended to: (1) provide background knowledge about Muslim people and Islam, (2) dispel stereotypes and myths and replace them with facts and information, (3) suggest ways that educators can address these important topics in the classroom and (4) provide relevant key words and definitions.

Myth #1: All Muslim people are Arab or Middle Eastern.

Although Islam began as a religion in the Middle East and its holiest sites are located there, the region is home to only about 20% of the world’s Muslims. As of 2015, there were 1.8 billion Muslims in the world, which is roughly 24% of the world’s population, according to a Pew Research Center estimate. While many people think that most Muslims are of Middle Eastern descent, in actuality Indonesia (in Southeast Asia) currently has the single largest Muslim population. Projections into the future estimate that India (in South Asia) will have the world’s largest population of Muslims by the year 2050.

In terms of Muslims in the United States, 75% of all U.S. Muslim adults have lived in this country since before 2000. The Muslim American population is significantly younger and more racially diverse than the population as a whole, with 30% describing themselves as white, 23% as black, 21% as Asian, 6% as Hispanic and 19% as other or mixed race.

Myth #2: Islam is a violent religion and Muslims identify with terrorism.

Within every religion, there exists a spectrum of attitudes and behavior and extremism is not unique to one particular belief system. There are people who sincerely view themselves as Muslims who have committed horrible acts in the name of Islam. These people, and their interpretation of Islam, is rightly called “extremist;” they are a minority within Islam and the vast majority of Muslims reject their violence and consider their interpretation a distortion of the Muslim faith. Extremism is not unique to Islam.

According to a 2015 Pew Research Center study collected in 11 countries with significant Muslim populations, people overwhelmingly expressed negative views of ISIS. It is important to keep in mind that Islam, like other Abrahamic religions, includes a large pool of opinions and different ways to understand the traditional holy text that was written in a different era. Terrorists use radical interpretations of Islam, which take a small number of texts that were meant to regulate warfare in the early days of Islam. Terrorists then apply these interpretations to contemporary times.

There is also a perception—even among many Muslims—that Muslim groups and leaders do not sufficiently denounce acts of terrorism. A 2011 Pew survey found that about half of all U.S. Muslims said their own religious leaders have not done enough to speak out against terrorism and extremists. However, it is useful to note that there are many Muslim heads of state, politicians, organizational leaders and individuals who regularly condemn these acts. For example, after the 2015 terrorist attacks in France, Saudi Arabia, the United Arab Emirates, Kuwait, Qatar and Egypt led condemnations of the attacks. A coalition of leading national and local American Muslim groups also held a press conference to condemn the attacks. Further, thousands of Muslim clerics worldwide passed a “fatwa” (i.e. Islamic legal opinion) against terrorist organizations such as ISIS, the Taliban and al-Qaeda and requested that these terrorist groups not be branded as “Muslim organizations.”

Muslims are also subject to increased incidents of hate crimes. In 2014, there was an overall decrease in hate crimes in the United States, but the number of hate crimes targeting Muslims grew from 135 in 2013 to 154 in 2014. And this is most likely an underrepresentation of the number of Muslims targeted because the numbers reflect only those crimes reported to police.

It is important to remember that terrorist attacks in the United States have been committed by extremists who have adhered to a wide range of ideological beliefs including the Ku Klux Klan, white supremacy, anti-government, Islamic extremism and others. No one ideology is responsible for terrorism in the United States.

Myth #3: You can’t be Muslim and be patriotic to America.

Based on a Pew Research Study survey, there are an estimated 3.45 million Muslims in the United States (some estimates of the Muslim population are larger), making up about 1.1% of the total population. A 2011 Gallup poll found that the majority of Muslim-Americans say that they are loyal to the United States and are optimistic about the future even though they experience bias and discrimination. In a 2011 study by Pew, a majority of Muslim Americans (56%) reported that most Muslims who come to the United States want to adopt American customs and ways of life.

Muslim Americans are equally as likely to identify with their faith as they do with the United States; 69% identify strongly with the U.S. and 65% identify with their religion. A 2013 Pew study found that most Muslim-Americans (63%) say there is no inherent tension between being devout and living in a modern society; as a point of comparison 64% of American Christians felt that way. There are currently two members of the United States Congress who are Muslim-American (Keith Ellison of Minnesota and Andre Carson of Indiana) and 5,896 members of the U.S. military self-identify as Muslim. (Note that of the 2.2 million members of the military, 400,000 of those have not reported their religion so the number of Muslims in the military is likely higher.)

Myth #4: Islam oppresses women and forces them into a subservient role.

A common perception is that Muslim women are oppressed, discriminated against and hold a subservient position in society. The role and status of Muslim women in society cannot be separated from the role of women in the larger society because women around the world of all races, religions and nationalities face inequality on many levels. Muslim women are not alone in this. The Quran explicitly states that men and women are equal in the eyes of God and forbids female infanticide, instructs Muslims to educate daughters as well as sons, insists that women have the right to refuse a prospective husband, gives women the right to divorce in certain cases, etc. However, interpretation of gender roles specified in the Quran varies with different countries and cultures and in the Islamic world, there exist principles and practices that subjugate and oppress women (e.g. forced marriages, abductions, deprivation of education, restricted mobility). Many contemporary women and men reject limitations put on women and reinterpret the Quran from this perspective. It is also important to understand that, similar to other religions, people in positions of power will sometimes use religion as an excuse to justify oppression of women.

The head scarf is often cited as an example of oppression. The Quran directs both men and women to dress with modesty but how this is interpreted and carried out varies a great deal. Many people think that Muslim women are forced to wear a hijab (head scarf), niqab or burqa. While it is true that in some countries with significant Muslim populations women are forced to wear the hijab, this is not the reason Muslim women wear the hijab in most cases, particularly in the United States. In fact, many women choose to wear a hijab, niqab or burqa on their own and do so for a variety of reasons including a sense of pride in being Muslim, a collective sense of identity or to convey a sense of self-control in public life.

Another measure of women’s roles in Muslim society is leadership. Since 1988, eight countries have had Muslim women as their heads of state, including Turkey, Indonesia, Senegal, Kosovo, Kyrgyzstan, Bangladesh (two different women), Pakistan and Mauritius. Many Muslim countries—including Afghanistan, Iraq, Pakistan and Saudi Arabia—have a higher percentage of women in national elected office than does the United States.

3 Things Educators Can Do

Lipka, M. 2015. Muslims and Islam: Key findings in the U.S. and around the world. Washington: Pew Research Center.

PBS. What factors determine the changing roles of women in the Middle East and Islamic societies?. Arlington: Public Broadcasting Service.