Nike's Ad and Believing in Something 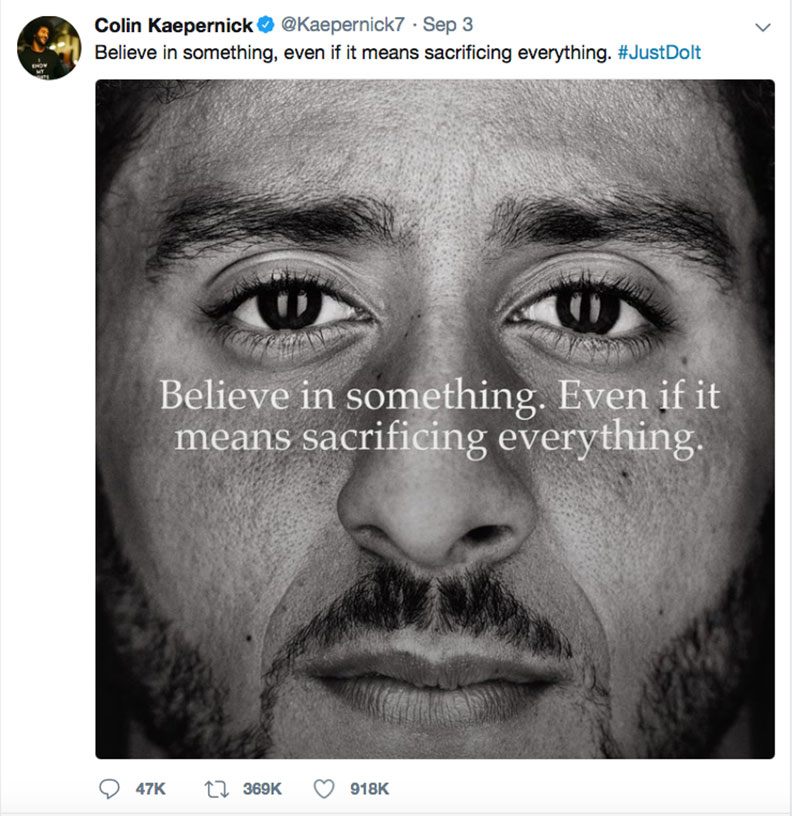 Colin Kaepernick tweeted the new Nike advertisement he appears in as part of a new deal with the company.

In September 2018, Nike announced that Colin Kaepernick, the former N.F.L. quarterback with the San Francisco 49ers, would be prominently featured as part of its 30th anniversary “Just Do It” campaign. The campaign’s slogan “Believe in something. Even if it means sacrificing everything” is featured in the ad. Kaepernick previously had a deal with Nike from his time as a quarterback that was set to expire, but it was renegotiated into a multi-year deal in combination with this campaign.

Colin Kaepernick was a quarterback for the San Francisco 49ers from 2011 to 2016. In August 2016, Kaepernick decided to take a stand about racial injustice by refusing to stand for the National Anthem at football games. He spent much of the season either sitting or kneeling during the anthem. It was the subject of a lot of public discussion and controversy.

After the 2016 season, Kaepernick opted out of his contract with the 49ers, which made him a free agent at the beginning of the 2017 season; but he has not been hired by another team.  In 2017, early in the football season, the controversy re-emerged again when more than 200 N.F.L. players across many NFL teams took a knee during the anthem. In addition to professional football players taking a knee, many middle and high school sports players across the country—as well as those in college—took a knee in solidarity with Kaepernick and the issues raised by his protest.

The protest movement that Kaepernick started has been interpreted by some as being disrespectful to the American flag and the military; political conservatives have widely condemned it. However, Kaepernick has been clear that his protest is about racial injustice and in particular about the ongoing deaths of Black and Latino men at the hands of police. Since the Nike ad came out featuring Kaepernick, there have been a variety of responses including praise for Nike and the ad, as well as people vowing to boycott Nike and their products.

The full Nike ad in commemoration of their 30th anniversary can be watched here: Nike-Dream Crazy (video)