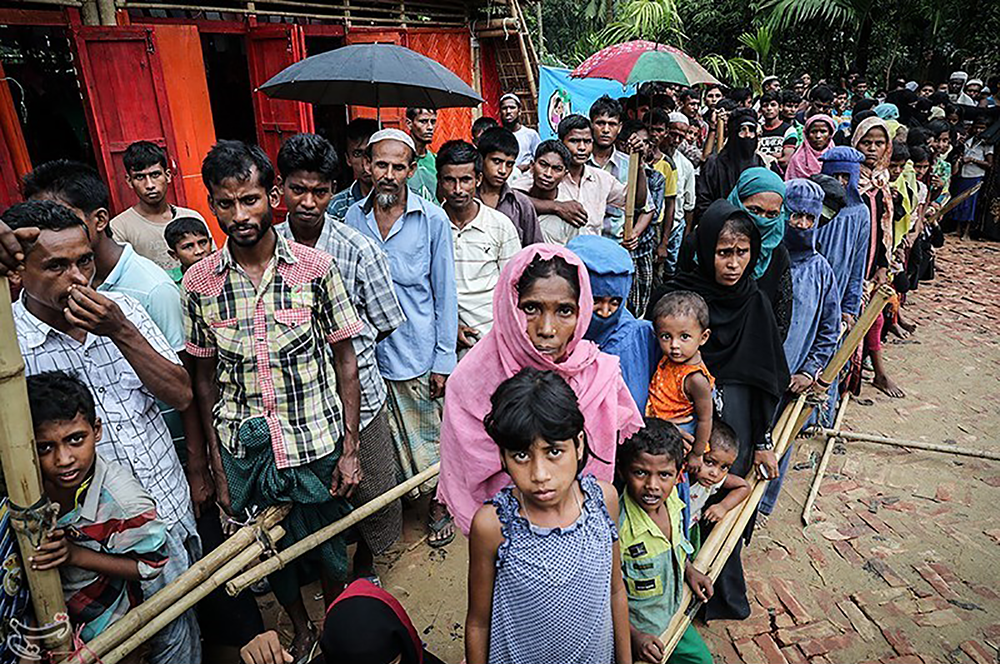 Displaced Rohingya Muslims in Myanmar who fled into neighboring Bangladesh to escape violent and deadly persecution in Myanmar, October 13, 2017.

Who are the Rohingya People in Myanmar?

The Rohingya people are an ethnic minority group (the vast majority of whom are Muslim) in the country of Myanmar, a predominantly Buddhist country. The Rohingya numbered about one million people at the beginning of 2017 and represent the largest percentage of Muslim people in Myanmar, with the majority living in the Rakhine state. The Rohingya people have their own language and culture and trace their history to descendants of Arab traders and other groups who have been in the region for generations. The government of Myanmar denies the Rohingya citizenship, and excluded them from the 2014 census.

Since August 2017, about 655,000 Rohingya people have fled into neighboring Bangladesh to escape violent and deadly persecution in Myanmar. This includes discriminatory policies and recent violent attacks by the Myanmar military, including reported rape, murder and arson. A number of Rohingya villages in the Rakhine state were burned down by Myanmar security forces. Some of the Rohingya people have also traveled by land and sea to Indonesia, Malaysia and Thailand where they live in refugee camps.

The United Nations’ top human rights official called what is happening to the Rohingya a “textbook example of ethnic cleansing.” Ethnic cleansing is defined as: “rendering an area ethnically homogeneous by using force or intimidation to remove from a given area persons of another ethnic or religious group.” However, Aung San Suu Kyi, Myanmar’s de facto leader and Nobel Peace Prize laureate, has denied that ethnic cleansing is taking place and dismissed international criticism of her handling of the crisis. Although this crisis has intensified recently, the targeted and sometimes violent discrimination against the Rohingya has a long history.

The international community has reacted in a variety of ways to the Rohingya crisis:

To learn more, watch this video together from Vox: The “ethnic cleansing” of Myanmar’s Rohingya Muslims, explained.