Talking to Young Children about Bias and Prejudice 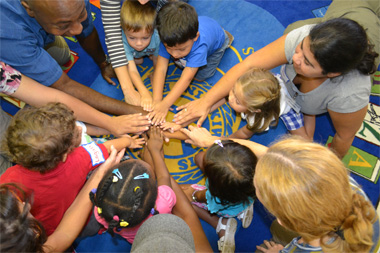 Hate is learned and can be "unlearned"

No child is born a bigot. Hate is learned, and there is no doubt it can be unlearned. Leading experts on child development argue that the problem begins as early as preschool, where children have already learned stereotypes or acquired negative attitudes toward "others:" The process of countering those negatives with positives begins at an early age.

Louise Derman-Sparks, an educator and specialist on child development, points to three major issues that are important to keep in mind when talking to children about prejudice and discrimination.

Children are not colorblind

It is a myth that young children don't notice people's differences, especially skin color. Children are in fact acutely aware of our shadings and gradations, and they need matter-of-fact, simple, and truthful explanations of these differences. At an early age they may ask for explanations. It is important for parents to be equipped to respond.

Talking about differences does not increase prejudice in children

Being aware of differences is not the same as avoiding, ridiculing, or fearing specific differences. Moreover, awareness does not lead to negative attitudes. Children learn biases from important adults in their lives, from the media, from books and from peers. Parents and adult family members need to talk to their kids-to give them accurate information and to reinforce when their behaviors indicate a value of differences as opposed to a prejudice. Surprisingly, many adults have trouble opening up and broaching the subject. For these adults it's a good idea to practice the discussion with an adult before taking it up with children. Above all, parents and adult family members should ensure their words of wisdom are in tune with their actions. Sending a contradictory message only reinforces prejudices and stereotypes.

It is not enough to talk about similarities among people

While we want our children to understand the things that bind us as human beings, it is equally important that they understand that shared characteristics, language and customs are expressed in different ways. When we continuously tell our children, "See, they do that just like us;' we may be implying that similarities are the only things that make "those" people acceptable.

A child's age is one of the most important factors in considering how to begin a discussion on any subject dealing with prejudice, discrimination or, more simply, the things that make people different. The most important thing to keep in mind is that it is never too early, or too late, to talk to children about respecting diversity.

During preschool years, children begin to notice physical aspects of identity. At about age 2, children become increasingly aware of gender. This is followed by curiosity about skin color, hair color and texture, eye shape and color, and other physical attributes. Awareness of disabilities tends to come later; however, some toddlers begin noticing more obvious disabilities, such as a person using a wheelchair. Usually between the ages of 2 and 3, children will begin to notice cultural aspects of gender influence. For example, they may take note of the fact that girls tend to play with dolls while boys play with trucks. They may also begin to recognize ethnic differences, noticing that children eat different foods and celebrate different holidays or, conversely, do not celebrate or recognize certain holidays. As they begin to notice differences, 2-year olds may show signs of "pre-prejudice"-they may act afraid or uncomfortable. Not necessarily possessing the vocabulary to express their concerns, they may avoid or ignore a child they perceive to be different.

Three- and 4-year-olds begin to expand observations of differences and seek explanations for those differences. They show a greater awareness of their own and other's appearances. They ask questions about where they got their own skin, hair, and eye color, or why certain groups of people are called names that reflect colors other than what they are.

It is not unusual for them to ask questions such as, "Will I always be this color or will it change as I grow up? Why doesn't my best friend have the same color skin as me? Why does daddy have brown hair and I have black hair?"

Five-year-olds begin to build a group ethnic identity, as well as an individual identity. They can more fully explore the range of differences within and between racial and ethnic groups as well as the range of similarities between groups. They can now begin to understand scientific explanations for differences in skin color, hair texture, and eye shape. They accept the use of categories and seek to know where they themselves fit.

It is essential to keep these stages of development in mind when addressing issues of diversity with preschoolers. What is in a child's environment (as well as what is absent) provides children with important information about who and what is important. Therefore every effort should be made to create a setting that is rich in possibilities for exploring cultural diversity. Consider decorating their rooms with objects made from a variety of materials; if they are enrolled in a formal preschool program, work with the teacher to see that their classroom follows suit. Play music with words from different languages and try to introduce games from around the world. Try art projects that introduce various cultural traditions. Folk dancing and storytelling are two especially effective ways to introduce children to other cultures.

Creating an environment rich in possibilities for exploring diversity:

When deciding which materials to include in a child's room or in a preschool classroom, do not inadvertently display pictures, books or objects that reinforce stereotypes. Instead, show people within cultural groups enjoying a range of customs and activities, living in a variety of settings, and belonging to various socioeconomic groups as well as single-parent, two-parent, or extended family homes. In addition, it is important not to confuse images of past ways of life of a group with its contemporary life or confuse images of people's ceremonial or holiday life with their daily lives.

Teaching Children Begins by Taking a Look at Ourselves

Parents, guardians, and teachers also struggle with diversity issues every day. First, we need to take a hard look at ourselves and explore our own cultural biases and assumptions. What "filters" impact the ways in which we view the world? What words are we using to teach our children about their own culture, as well as about those around them? Do our actions match our words? If the only people different than ourselves that our children see us interacting with are paid service personnel, we are indeed sending a message about how we value diversity.

We should attempt to integrate diverse information into regular conversation and daily activities. Relegating this type of conversation to "multicultural time" or to a specific holiday or month sends a message that these activities are unimportant relative to other activities. We must seek out opportunities that relate to those things that a child does daily or weekly.

We must prepare ourselves to respond to acts of bias, even if they are unintentional. Children will carefully observe how the adults in their lives intervene when someone is the target of hurtful or discriminatory behavior. Silence in the face of injustice conveys the impression that adults condone the behavior or consider it not worthy of attention. We must make it clear to our children that name-calling will not be tolerated and explain the thinking behind "zero tolerance" when it comes to prejudice.

When Life Hands You a Lemon, Peel It

We often think that teaching our children about diversity is a long and difficult task. However as the following exercise shows, it can be as simple as peeling a lemon:

Gather a group of young children and give them lemons, one lemon for each child. Tell them to `get to know your lemon." The children will examine their lemons-smell them, touch them, throw them in the air, and roll them around. After a few minutes, take the lemons back and collect them in a big basket. Next, ask the children to find their lemons from among the bunch. Remarkably, most recognize their lemons at once. Some will even get protective of them.

After exploring those ideas, collect the lemons again. This time, peel the lemons and return them to the basket without their protective skin. Now tell the children to again find their lemon. Presented with this quandary, the children's reactions are always precious. "But the lemons all look the same!" they'll exclaim. This opens the door to a discussion of how people, much like the lemons, are pretty much the same on the inside.

While it may take only 15 minutes and a bowl of lemons to teach young children about diversity, it takes a conscious effort and a lifetime of attention to ensure that lesson is remembered. As parents and adult family members, we must provide that commitment.

Excerpted from an article by Caryl Stern which originally appeared in Our Children, February 2000. Reprinted by permission.

Children learn biases from important adults in their lives, from the media, from books and from peers. Parents and adult family members need to talk to their kids-to give them accurate information.