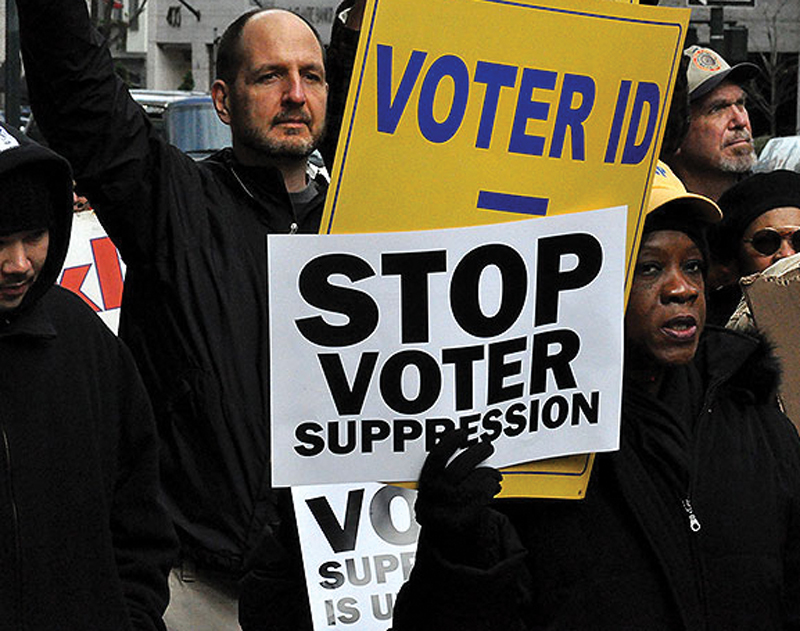 The Selma to Montgomery March for Voting Rights

What is the difference between having the right to vote and having the ability to vote?

To suppress means “to end or stop by force.” Voter suppression laws are used to impact the outcome of an election by discouraging or preventing specific groups of people from voting.

The U.S. has a long history of attempts to take away people’s ability to vote. Over the past decade, state lawmakers have made specific efforts to limit or restrict the ability to vote--particularly for Black people, Latinx people, young people and people who are elderly. These states claim that the reason they impose voting restrictions is “voter fraud.” Voter fraud involves illegal interference with the process of an election. However, there is very little evidence of voter fraud. According to the Brennan Center for Justice which has done extensive studies of voter fraud, voter fraud is extremely rare. “The Big Lie” perpetuated during the 2020 Presidential election that the election was “rigged” and “stolen” has been thoroughly debunked. In fact, the 2020 Presidential election was deemed the most secure in American history by the Elections Infrastructure Government Coordinating Council & Election Infrastructure Sector Coordinating Executive Committees.

Recent efforts at voter suppression are extensive and concerning. As of March 24, 2021, lawmakers in forty-seven states have carried over or introduced 361 bills that would make it harder to vote. By comparison, this is seven times the number of voter suppression bills introduced during the same time period in 2020. Many of these laws seek to limit mail-in voting and impose stricter voter ID requirements along with other measures that will make it challenging to vote. For example, one of the bills in Georgia will make it illegal to distribute food and water to voters who are waiting in line.

There are various ways in which states try to limit people’s ability to vote.

In the past several years, states have expanded early voting, which provides opportunities for people to vote before election day. This benefits all voters but especially senior citizens, working people (especially those without flexible schedules), people with disabilities among others. Now, we are seeing a cutting back of these early voting options including nights, weekends and the number of days overall. These cutbacks will have a significant impact on specific groups of voters. For example, "souls to the polls" helps Black voters go straight from church on Sunday to their voting polls. Without weekend voting, there will be fewer options for these and other voters, resulting in longer lines and less representation in voting, especially for certain groups.

All states have historically allowed absentee voting for people who are unable to vote in their polling location. States have different rules regarding who can and cannot vote absentee. For example, some states require absentee voters to provide a specific “excuse” for voting absentee. Due to the pandemic, an unprecedented number of people voted with absentee ballots during the 2020 Presidential election. Many used mail-in voting or used ballot drop-boxes. As part of their current voter suppression efforts, various states have proposed laws to restrict those absentee voting options by limiting who can vote by mail, making it harder to get mail ballots, eliminating “no excuse” absentee voting and putting up barriers to complete and cast mail-in ballots.

Laws are being proposed that make registering to vote more difficult. These restrictions include requiring a person to prove citizenship or show specific identification when registering to vote. Other restrictions limit the window of time in which someone can register or vote or require registration way in advance of the actual election—long before it’s in voters’ minds. There are also states trying to limit election day registration (registering on the same day as election day) and automatic voter registration (eligible voters automatically become registered when they interact with a government agency, like getting a drivers’ license).

Many states have introduced new or harsher voter ID laws for in-person or mail-in voting. These include states that previously did not require that an ID be presented when voting early or in-person, and now want to require it. Some states are proposing laws that disallow the use of certain IDs (i.e., out-of-state licenses or student IDs) and other laws that require voters to include a photocopy of their photo ID with their absentee ballot applications and their completed mail ballot..

Voter purging involves election officials removing voters’ registrations for a variety of reasons and not informing those voters. Often, those voters do not find out their names have been removed until they arrive on Election Day to cast their vote. Recently, these purges have become more aggressive as some states have increased their frequency or extensiveness of purges or adopted flawed practices that create the risk of improper purges.

Other voter suppression efforts include felony disenfranchisement (permanently depriving people who have been convicted of felonies of their right to vote), precinct closures (causes voter confusion and longer lines), and gerrymandering (redrawing of district lines to reallocate representation in Congress and state legislatures, often conducted in an attempt to control election outcomes). All these laws, both together and separately, prevent many people from exercising their right to vote and disproportionately affect people of color, elderly people, young voters and those who live in poverty.

Federal Legislation to Expand and Protect the Vote

Despite these efforts, some states have proposed policies to expand access to voting. In addition, the federal government has introduced two federal bills to broaden people’s ability to vote and counteract the voter suppression laws. They are: