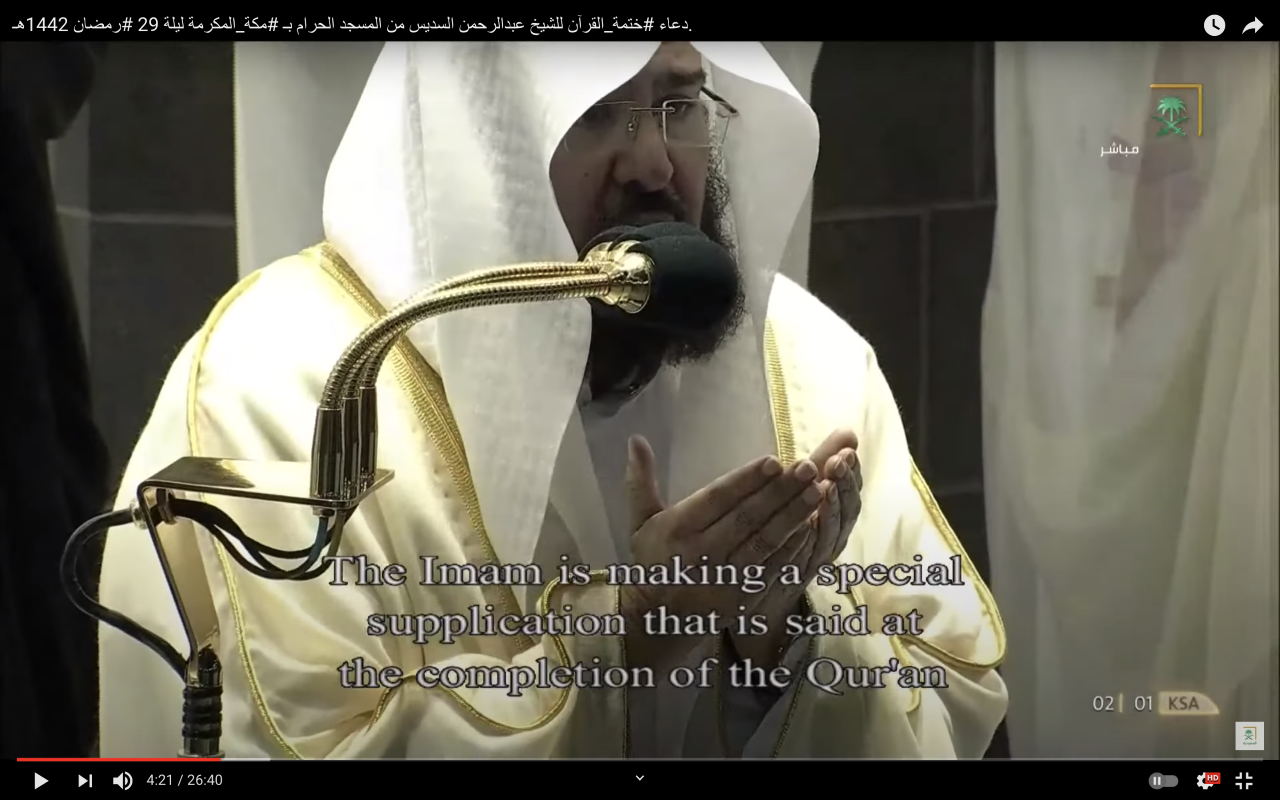 Sheikh Abdulrahman al-Sudais delivering his sermon at the Grand Mosque in Mecca on Tuesday, May 11th (screenshot from Saudi state television)

Less than a year ago, a high-profile sermon at the Grand Mosque in Mecca fueled speculation Saudi Arabia might be prepared to follow some of its neighbors’ footsteps by making peace with Israel.  However, clerics at Saudi Arabia’s Grand Mosque in Mecca as well as the Prophet’s Mosque in Medina sent a starkly different series of messages this week, in how they addressed violent confrontations between police and protesters at the al-Aqsa Mosque on Friday, May 7th.

Israeli police claimed that their actions at al-Aqsa were in response to hundreds of rioters “throwing stones, various objects and firing fireworks at police forces near one of the Temple Mount gates,” and that rioters had then barricaded themselves in the al-Aqsa Mosque.  And while it is understandable that Muslim religious leaders were deeply upset by police firing stun grenades into the mosque, a series of prominent Saudi sermons unfairly characterized Israel’s action as a premeditated and malicious attack, targeting peaceful worshippers without any prior provocation.

These two mosques constitute the two holiest sites in Islam, and are administered by the General President for the Affairs of the Two Holy Mosques, Sheikh Abdulrahman al-Sudais.  In September of last year, Imam Sudais delivered a sermon that discouraged “passionate emotions and fiery enthusiasm” against Jews.  Yet his sermon this past week at the Grand Mosque did exactly that, as did at least three others at the holy sites under his purview.

On Tuesday, May 11th, Sudais delivered a sermon praying for God to “keep the al-Aqsa Mosque, God keep them from the attacker Zionists, the occupying, combatant brutes.”  He added: “we seek refuge in you from their butchery and seek protection in you from their evils and all the rest of the enemies of religion,” so “suffice us from their evil.”

That same day, an Imam of the Prophet’s Mosque in Medina delivered an equally if not more strident sermon.  In it, Sheikh Salah al-Badir called for God to “liberate the al-Aqsa Mosque from the usurper Jews and the traitorous occupying Zionists.”

Reinforcing this trend, similarly hateful sermons were delivered the next day at both the Grand Mosque and the Prophet’s Mosque for Eid al-Fitr, a major holiday marking the end of Ramadan.

At the Grand Mosque in Mecca, the Eid sermon was delivered by Sheikh Saleh bin Humaid, a member of the Saudi government’s top body of religious scholars and former parliament speaker.  During his Eid sermon, Bin Humaid prayed for God to “grant victory to our brothers in Palestine over your enemy and their enemy.”  Elaborating in this regard, he called for God to “cleanse the al-Aqsa Mosque from the filth of the occupier Zionists” and to “protect it from the aggression of the attackers and the befoulment of the wrongdoers.”  Saudi state television broadcast his sermon and even promoted a clip of the most intolerant excerpt on social media.

Yet it was the Eid sermon at the Prophet’s Mosque in Medina was perhaps the most worrisome of the four, in that it seemed to incite attacks.  Sheikh Ahmad bin Humaid proclaimed: “Oh God, send down your victory and your support to our brothers in Jerusalem and its environs.  Oh God, plant their feet and guide their firing.  Oh God, grant them victory over your enemy and their enemy.”

Finally, his sermon also echoed similar language degrading Israeli Jews, urging God to “cleanse the al-Aqsa Mosque from the befoulment of Jews.  Oh God, it is incumbent upon you to deal with the usurper Jews and the aggressor Zionists” with divine wrath and anger against them.

All four of these senior clerics serve at the pleasure of Saudi Arabia’s King Salman, and their sermons are also promoted on Saudi government media outlets.  According to the State Department's latest country reports on international religious freedom, which were coincidentally released this week, “only government-employed clerics are permitted to deliver sermons” in Saudi Arabia, and their sermons “must be vetted… in advance” by the Saudi Government’s Ministry of Islamic Affairs.