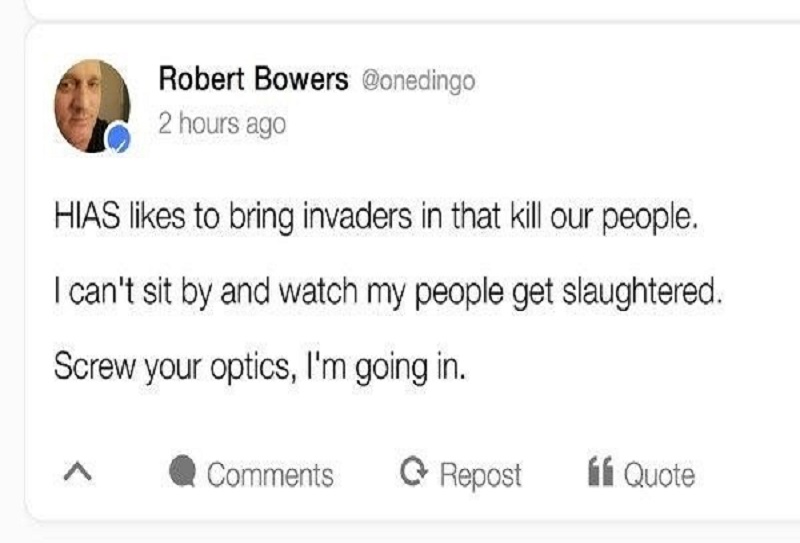 Robert Bowers appears to have referenced “optics” on social media prior to allegedly opening fire at the Tree of Life synagogue in Pittsburgh. His comments -- “Screw your optics, I’m going in.” -- and extremists’ reaction to them highlight a division that has dogged the white supremacist movement since August 2017’s violent “Unite the Right” rally.

Following the shooting rampage, Matt Parrott, co-founder of the now defunct Traditionalist Worker Party, pointed out on Gab, “There is no more concise way to summarize the divide in our movement which has grown and grown over the past couple years than, “Screw your optics, I’m going in!”

The optics debate is a major point of contention among various white supremacist factions: Is it better to promote white supremacist ideology via overtly National Socialist symbolism (swastikas, for example), or with the less overtly racist imagery (including American flags) favored by so-called American Nationalists? Debates over optics resurface whenever white supremacists are the subject of negative media attention.

Unsurprisingly, the attack at Tree of Life has renewed this debate.

Some white supremacists insist that even the best optics won’t change anything for their cause. @ethnorational tweeted, “If you’re pro-White or Right-wing, you’ll be considered a part of the problem either way.” @Frieden33090227 wrote, “it’s going to come to war whether we like it or not. Fuck optics.” @THE_Colonel1 tweeted, “optics are secondary to action.” @maybewholesome agreed, tweeting, “Optics. Don’t. Matter.”

Greg Johnson, the head of white supremacist media group Counter-Currents, took the opposite view, tweeting, “I want to win, which is precisely why I want to stake out the moral high ground. The goal is to persuade our people that White Nationalism is the solution to ethnic conflict not the cause of it.” @European Revolution appeared to agree, emphasizing the importance of “an appealing message and presentation...” 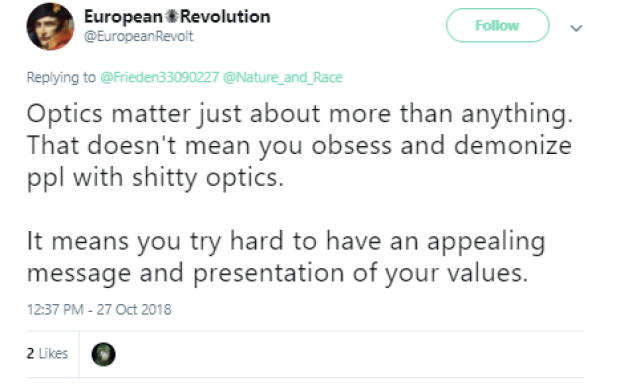 In his YouTube video response to the attack, outspoken anti-Semite and recent U.S. Senate candidate Patrick Little said the incident handed Jews “a victim card on a silver platter” and “all its going to do is get them entrenched in their positions of power.” He also said the attack will make it “hard to approach normies [non-white supremacists]” with talking points about Jewish control of the media and government, and the “fact that Jews are behind mass immigration.”

Others seemed eager to move beyond optics. Just after the attack, another extremist criticized the grounds of the debate, tweeting, “Sorry, man, but there are more than just the two options of ‘care about optics’ and ‘go pull a terrorist stunt.’ I hate the optics argument. And I don’t agree with you that ‘optics are king.’ But I would never advocate that people do stupid shit like domestic terrorism.”