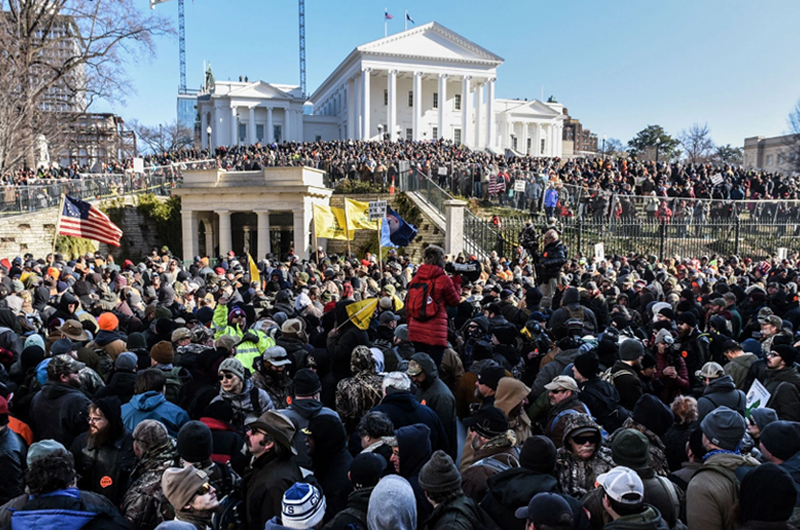 One year before the January 6, 2021 siege on the U.S. Capitol building, more than 20,000 mostly armed people gathered 97 miles away outside the Virginia State Capitol in Richmond for the Virginia Citizen Defense League’s (VCDL) Lobby Day. The event, held on January 20, 2020, allowed protesters to express their anger over newly elected Virginia Democrats’ reported plans to pursue stricter gun control legislation. Celebrated at the time for being a peaceful event, one year later the 2020 Lobby Day is better understood as a harbinger of what was to come -- including the January 6, 2021 assault on the U.S. Capitol.

As COE analysts suggested at the time, the Richmond rally provided a prototype for a violent year, culminating in the ongoing efforts to intimidate lawmakers into overriding the results of an election. Like so many of the extremist-related events of 2020, Lobby Day was preceded by supporters spreading conspiracies designed to sow anger and expressing violent rhetoric against their perceived enemies. It was attended by armed protesters who referred to elected officials as tyrants and made threats against them. It created a space for extremists and non-extremists to mix and demonstrated the right’s current playbook and response to violence: portraying themselves as victims.

Though the VCDL has held Lobby Day events since 2002, the 2020 rally was particularly significant to local and national gun activists because it was an angry reaction to Virginia’s 2019 election, which saw Democrats gain majorities in both houses of the state legislature for the first time since 1994.  A number of the incoming Democratic legislators ran on pro-gun control platforms and planned to propose several gun-control laws, including universal background checks and bans on military-style “assault weapons” and high-capacity ammunition magazines. These plans sparked a backlash from gun advocates, and the VCDL encouraged rally attendees to (legally) carry firearms at the event.

In the days and weeks before the rally, conspiracies and lies spread rapidly among gun activists, perpetuating misinformation and riling up supporters. Perhaps the most common falsehood was that Virginia Democrats intended to confiscate firearms, even though Governor Ralph Northam and other Democratic lawmakers consistently maintained that they were not pursuing that maximalist position. Still, this idea spread on social media and it received boosts from far-right voices, including Rick Wiles, the far-right conspiracy theorist and anti-Semitic host of TruNews and white supremacist Nick Fuentes, both of whom described Democrats’ position as wanting to go door-to-door to seize firearms. Just three days before the rally, President Trump fanned the flames in a way that would become very familiar as 2020 wore on, tweeting, “Your 2nd Amendment is under very serious attack in the Great Commonwealth of Virginia. That’s what happens when you vote for Democrats, they will take your guns away.”

Other conspiracies framed pro-gun activists as being under attack. Some alleged that the United Nations was involved in the gun control efforts and was sending troops, a falsehood linked to classic far-right conspiracies that a globalist conspiracy is trying to disarm Americans in preparation for a foreign invasion. Some painted Governor Northam and the state government as villains, speculating groundlessly that Northam was preparing to use the National Guard to seize guns, and planned to cut off access to electricity, telephones and the Internet.

Violent rhetoric spread quickly online. In a trend that presaged the virulent attacks on state officials during COVID-19 restrictions, threats were directed at specific legislators. A 4Chan user wrote, “The VA dems [sic] must be assassinated for great justice,” while another posted, “Fine with me, it’s open season on all democrats [sic] now coast to coast.” State Senator Dick Saslaw, Virginia delegate Lee Carter and Governor Northam were all explicitly targeted.

Amidst the threats to politicians, some began to talk about the January 20 Lobby Day as the beginning of a broader civil war, pitting citizens against government efforts to seize firearms. This rhetoric unsurprisingly coincided with an uptick in the use of the term boogaloo, an extremist slang term for a future civil war. The VCDL itself shared a video, “Does the Boogaloo Begin in Virginia?” This rhetoric only served to ratchet up the intensity surrounding the 2020 Lobby Day and helped create the expectation that gun activists were prepared to fight if they did not get their way.

Threats of Violence at the Event

Over the course of 2020, the norms against carrying firearms in public spaces broke down as protests grew increasingly militarized, with armed men becoming a fixture at coronavirus lockdown protests and counter-protests of Black Lives Matter rallies. The VCDL Lobby Day helped set this new tone. Prior to the event, the VCDL announced that there would be enough armed people at the rally “to take over a modern mid-sized country,” and attendees carried all kinds of firearms, including rifles, shotguns, AR-15s and even a Barrett sniper rifle.

Despite the lack of violence, the images that came out of Richmond were notable and impactful. They showed a crowd armed for war loudly expressing their disapproval outside a building that held legislators pursuing the agenda they were elected to enact. The ubiquity of firearms sent an unsubtle message to legislators that they should avoid angering the crowd. As one attendee said, “Just like sending a carrier to the Middle East, this is a show of force.”

If that warning wasn’t entirely clear, the protesters’ signs and displays made their intentions obvious. The crowd included people holding Gadsden flags emblazoned with the phrase, “Don’t Tread On Me”, an image and slogan long tied to anti-government circles. Another protester held up an image of a tree with a gun for a trunk, growing out of a pool of blood, accompanied by a Thomas Jefferson quote that’s a favorite among anti-government extremists: “The tree of liberty must be refreshed from time to time with the blood of patriots and tyrants.” Others held signs calling Northam a tyrant or comparing him to Hitler, while another sign read, “The American Revolution began for LESS.” 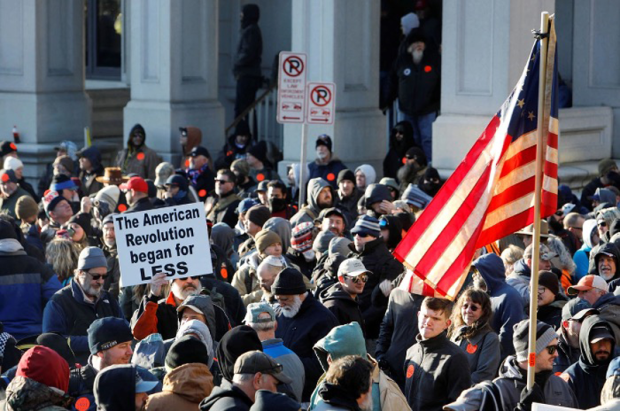 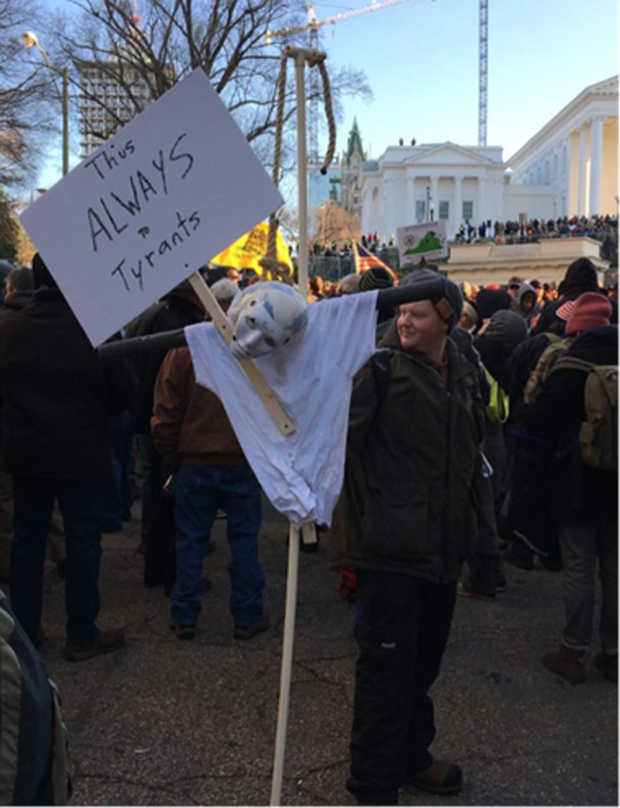 Other protesters erected a guillotine in the street outside the state Capitol grounds. In a sign of how 2020 would see people stoking conflict for political gain, the guillotine’s nominal blade promoted the website for a libertarian running for the U.S. House of Representatives in Virginia’s third district. Emblazoned with a simple message, “The Penalty for Treason is Death,” the gruesome prop was a popular backdrop for protesters’ photos of the day. 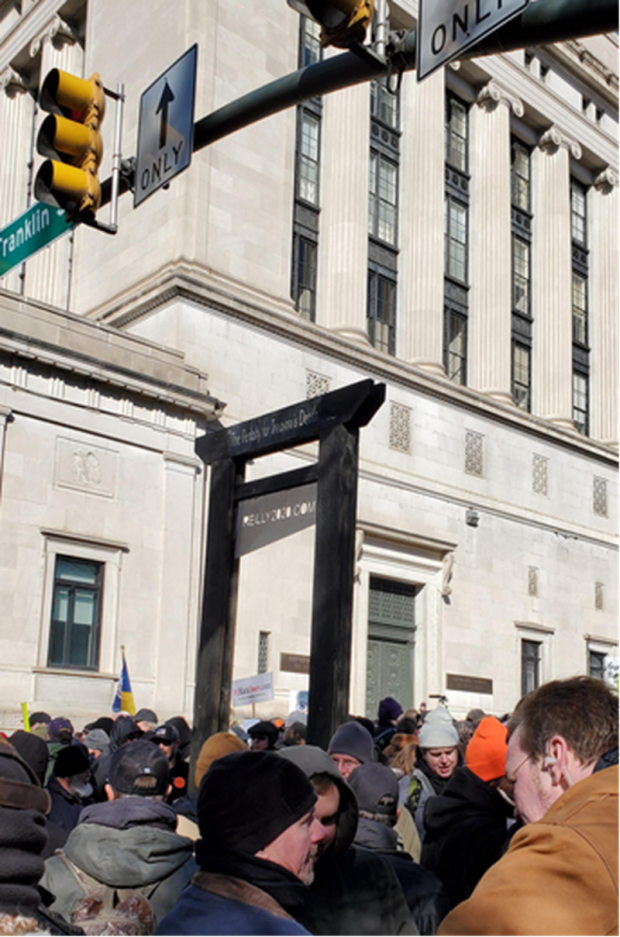 Comingling of Extremists and Non-Extremists

Though many who attended the 2020 VCDL Lobby Day were not extremists, the event placed extremists and non-extremists side-by-side, creating an opportunity for extremists to widely share their radical views. Extremists were apparently aware of this prospect; on Telegram, white supremacists encouraged people to capitalize on the moment to attract recruits. Wrote one user, “This event is a perfect storm of effective propaganda levers for us…The more we push this, the more we grow the divide, the more people realize where this country is headed, and the more we swell our numbers.”

Among the extremists who attended: Oath Keepers, Three Percenters, militias that participated in the 2017 Unite the Right rally in Charlottesville, Proud Boys, Patriot Prayer leader Joey Gibson, and Alex Jones. People held signs and flags that referenced anti-government extremist ideas as well as QAnon, and the boogaloo bois appeared in notable numbers for the first time, wearing their now-familiar Hawaiian shirts. This mixing of extremists and non-extremists became a familiar sight over the course of 2020, particularly at lockdown protests and Stop the Steal rallies.

Efforts to Control the Narrative in the Event of Violence

As the 2020 Lobby Day drew near and people began to note the intensity and vitriol surrounding the event, public concern grew, and on January 15, Governor Northam declared a temporary emergency, banning all weapons from Capitol Square in advance of the rally.

Rather than grappling with the effects of their rhetoric and online activity, some, including conspiracy theorist Alex Jones, suggested without evidence that the left was preparing a “false flag” operation to make the protesters look bad., The VCDL  encouraged such thinking, releasing a statement prior to the event that said, “The Democrats are afraid of the voters and want to portray this peaceful assembly of law-abiding gun owners in the worst possible way…Has the Democrat leadership actually invited violent groups to attend for the purpose of disrupting our peaceful assembly?” Others theorized that antifa planned to disrupt the rally – in some cases dressed as Confederate soldiers to blend in – even though local antifa activists had publicly stated that they had no intention of counter-protesting the event.

These baseless theories laid the groundwork for supporters to preemptively dismiss any violence that could occur as the work of their enemies, allowing them to avoid reflecting on what role their beliefs or rhetoric played in any clashes and thereby perpetuating the underlying conditions that produce violence. This impulse to shift any culpability away from the right and onto the left would rear its head in more sinister ways after the Kyle Rittenhouse shooting in Kenosha and the January 6, 2021 storming of the Capitol.

This tactic is currently being used to pre-emptively distance the right from any potential violence in connection to planned protests of President-elect Biden’s inauguration.