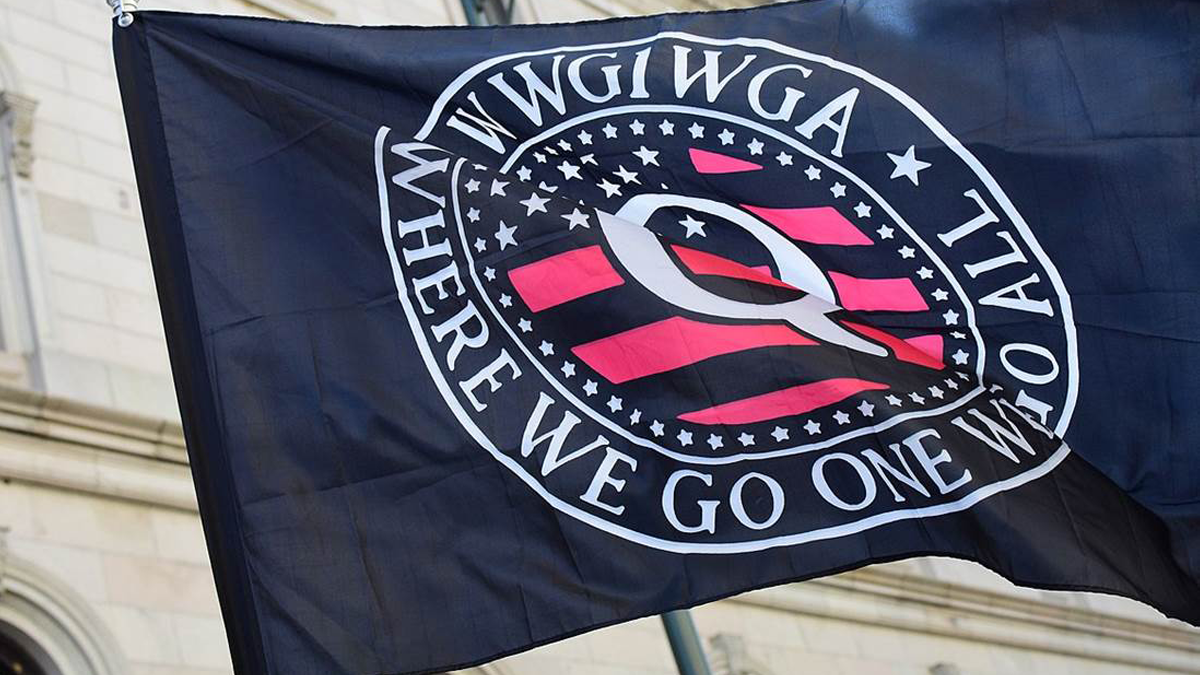 On the evening of June 24, 2022, “Q,” the anonymous figure whose online posts sparked the widespread QAnon conspiracy movement, re-emerged after more than 18 months of silence.

“Shall we play a game once more?” read the first post marking Q’s return on 8kun’s /qresearch/ board. The Q poster then followed up with two more messages that night. “It had to be done this way,” Q wrote in response to a user asking why they had disappeared. “Are you ready to serve your country again?” Q wrote in another post. “Remember your oath.”

Q posted to 8kun’s /qresearch/ board on June 24, 2022, after more than 18 months of silence. Source: QAnon post aggregator

Within hours of Q’s new posts (also known as “Q drops”), QAnon adherents had already begun “baking” (decoding) the drops, generating a range of theories about their meaning and why Q had returned. Many analyses linked the timing of Q’s return to the overturning of Roe v. Wade, viewing the posts as a sign that former president Trump is still pulling the strings behind the scenes and that his war against the Deep State wages on.

A fourth Q drop, posted on June 25, referenced the overturning of Roe v. Wade, suggesting it will lead to riots and a Democratic “power implosion.” Q followed up with a fifth drop on June 29, making references to January 6 committee witness Cassidy Hutchinson, who testified on Tuesday that Trump insisted he be allowed to march to the Capitol with his supporters, many of whom were armed. “Can emotions be used to insert a plant?” Q wrote in part. “Who is Cassidy Hutchinson?” Some anons have also pointed out that Q's new posts were made 1700 days after Q first appeared in 2017, which they view is significant as Q is the 17th letter of the alphabet. Additionally, in response to the third drop instructing anons to “remember their oath,” some Q followers began to post the “Digital Soldier” oath online, reaffirming their allegiance to Q. 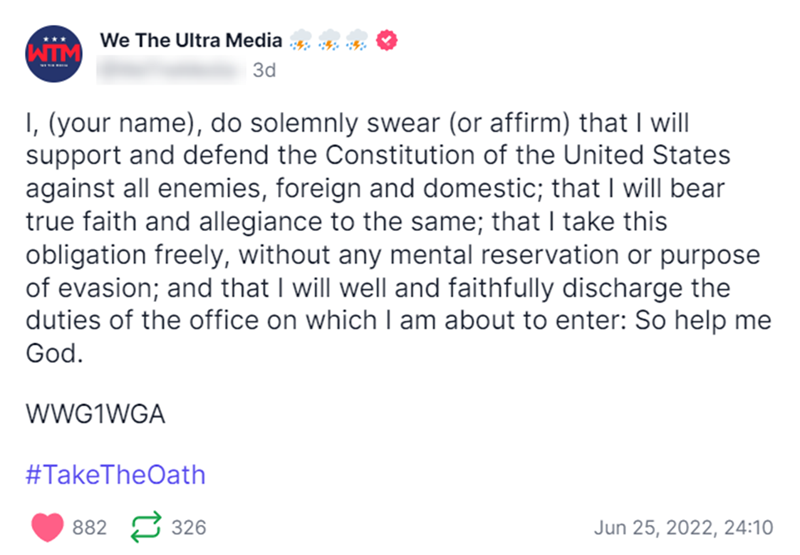 We The Media, a collective of QAnon influencers, encouraged their followers to take the “Digital Soldier” oath in the wake of Q’s return. The oath is the same oath of office sworn by public servants across the U.S., although Q followers conclude it with the popular QAnon rallying cry, “Where we go one, we go all.” Source: Truth Social

But not everyone is convinced that the new posts came from the original Q poster. Research conducted by Fred Brennan, who founded 8chan and sold it to current owner Jim Watkins, and members of the Q Origins Project, a QAnon research group, suggests that the posts may have been made by Jim Watkins; his son, Ron; or someone else with administrative access to 8kun. For years, researchers have speculated that the Watkinses had a role in writing the Q drops, although this has yet to be definitively proven. Brennan and the Q Origins Project point out that Q’s new drops were posted under the same tripcode that identified Q’s posts before they disappeared in 2020.
However, shortly before Q reappeared, 8kun rotated its “salt,” a cryptographic mechanism that converts a user’s password into a tripcode. As a result, it would have been impossible for Q to post with the same tripcode, even if they had used their old password. But Q’s posts were exempt, suggesting that someone at 8kun either knew Q was going to post again or made the post themselves. Shortly after Q’s new posts appeared, 8kun reverted the salt back to its original form. And if this wasn’t suspicious enough, the new Q drops were also posted via Tor, a capability which had been re-enabled shortly before the new posts appeared.

Some Q followers are also skeptical that these new posts came from the original Q poster. Several QAnon adherents have tried to question 8kun owner Jim Watkins, who had confirmed the new drops were “real” within hours of them being posted, about the site’s salt being rotated. Watkins has largely avoided these questions and has attacked some users who’ve expressed skepticism about the new posts, accusing them of being “shills.” Others are still waiting for former president Trump to “confirm” the new Q posts are legitimate, in the form of a post on Truth Social. Many of Q’s old posts were made around the time of a Trump tweet, and Q followers believe this is a sign that Q and Trump are working together.
Some Q promoters, like Lin Wood and Patrick Byrne, have warned their followers to stay away from the new posts, expressing belief that Q is a “psyop.” And other conspiracy theorists have speculated that former national security advisor Michael Flynn or Russian president Vladimir Putin could be behind the new posts, drawing upon longstanding conspiracy theories that Q might be a Russian-orchestrated psyop. 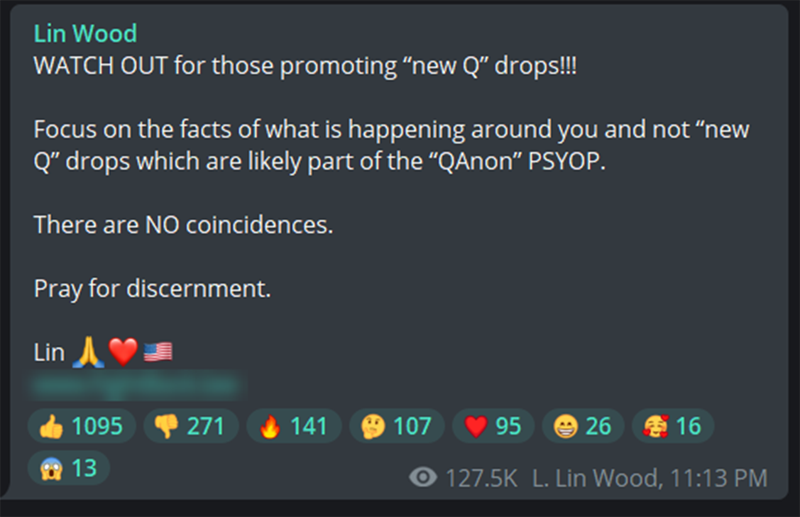 QAnon first surfaced on 4chan in late 2017, when an anonymous user known as “Q” began making a series of cryptic posts on the board. Followers of Q, known as “anons,” believe that Q is a military insider who has been sharing information about a secret war being waged by former president Donald Trump against the “Deep State,” a cabal of shadowy pedophiles who control the world and engage in child sex trafficking. Anons believe that the cabal will be brought to justice during “the Storm,” a day of reckoning in which the cabal and its collaborators will be arrested and sent to Guantanamo Bay, where they will face military tribunals and possible execution. Amidst the Covid-19 pandemic and 2020 election, QAnon became a bastion of support for anti-vaccine skepticism and the “Big Lie,” the baseless claim that the 2020 election was “stolen” from Trump.

Q stopped posting on 8kun in December 2020, shortly after former president Trump’s defeat in the 2020 election. Q’s unexpected return has reinvigorated the QAnon community, sparking a renewed sense of hope that Q’s wild and outlandish predictions will soon come true.

So why would Q return after so many months of silence? Researchers have put forth a range of theories: Perhaps the Watkinses thought new drops would revive 8kun’s declining user base, or maybe they felt threatened by an imitator Q account on Trump’s new Truth Social platform, which some anons had speculated was the real Q. Or perhaps Q couldn’t pass up the chance to troll the mainstream media and the left in the wake of Roe v. Wade being overturned.

Whether Q will begin posting regularly again or will disappear back into the shadows remains unclear, but Q’s return, even if temporary, is worrisome. Even in less eventful circumstances, a return of Q could revitalize the QAnon movement overall, which without its titular figurehead has struggled to find its footing and has seen frequent infighting between prominent members of the community.

The various false claims embraced by QAnon adherents – that a secret cabal is manipulating world events, that Covid-19 is a “hoax” and that the 2020 election was “stolen” from Trump – have branched into the mainstream over the past year, fueling political polarization and sowing trust in our democratic institutions. The normalization of conspiracy theories makes our society more susceptible to increasingly dangerous and extreme ideas that may drive people to harm others. The new Q posts, which allude to the idea that Roe v. Wade and the January 6 hearings are “distractions” being used to manipulate the public, are only fanning the flames.

Notably, QAnon loyalists tend to adamantly oppose abortion. With this, the fact that the new Q drops appeared on the same day as Roe v. Wade being overturned also validates a worrisome conspiratorial narrative: That Trump might still be in control after all and is delivering on the movement’s “Save the children” tenet, which posits that Democrats and members of the Hollywood elite are trafficking and sacrificing children in the form of secret Satanic rituals. If the “Deep State” was still pulling the strings, Roe would have never been overturned, QAnon adherents posit. Therefore, Roe’s reversal is seen as "proof” that Trump is still controlling things behind the scenes.

If ardent members believe that this one facet of the QAnon prophecy has finally been fulfilled, then they might expect that the other tenets of QAnon lore – most notably “the Storm” – are soon to follow. As Q has promised in the past: “Nothing can stop what is coming.”