Al Qaeda Renews Its Focus on Antisemitism and Attacking Israel 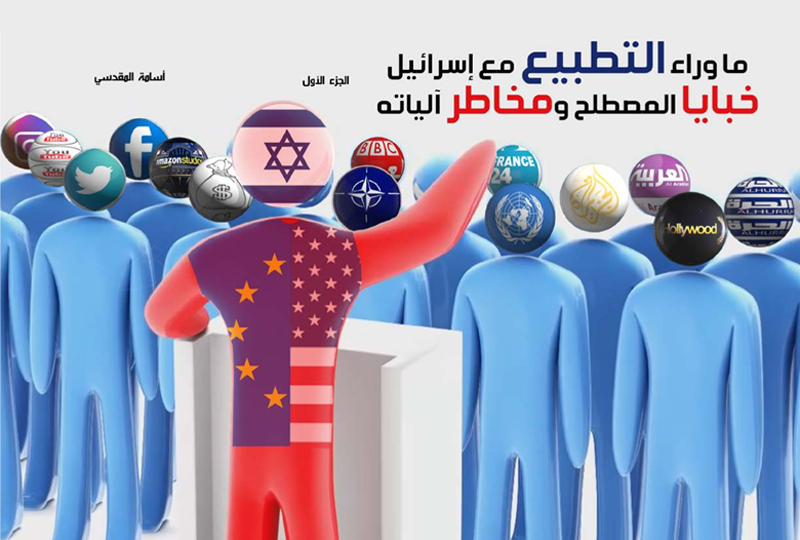 The cover image of Al Qaeda's article, "What is Behind the Normalization with Israel, the Mysteries of the Term and ِthe Dangers of its Machinations," shows a figure bearing the flags of Israel, the European Union, and the United States giving orders to bodies of news organizations, social media, finance, the United Nations, Hollywood and government. The notion that Israel and the West secretly control international organizations and the news media is a common antisemitic conspiracy theory.

In recent weeks, Al Qaeda has dedicated an unusual amount of its propaganda towards encouraging attacks on Israel, Jewish institutions, and Jewish people. Given shifts in the Islamist extremist environment—including the outbreak of violence between Israel and Hamas in May 2021 and Al Qaeda’s expectation that it will gain a safe operational haven in Afghanistan as the United States withdraws from the country—this suggests that Al Qaeda or one of its regional affiliates may intend to recommit to attack Israel or the Jewish Diaspora. In addition, the last time Al Qaeda noticeably increased its messaging around Palestine was in 2019, and its affiliates subsequently staged attacks against a hotel in Kenya and a military installation in Mali which they claimed were in protest of Israel’s “Judaization of Palestine.”

For decades, Al Qaeda has used the issue of the Israeli-Palestinian conflict to rally support for themselves and unify disparate Islamist movements under its banner. However, at the same time, the terrorist organization has failed to carry out a sustained campaign of attacks against Israel or against Jews in the Diaspora. This disparity between the group’s anti-Israel rhetoric and its actions has led to criticism of Al Qaeda by other jihadist groups that believe Al Qaeda should be doing more. Al Qaeda has been sensitive to this criticism in the past, and its senior leadership has often tried to explain away Al Qaeda’s failure to act. Now, the release of Al Qaeda’s One Ummah magazine (an official publication of the terrorist organization which declares the group’s focus and priorities to its supporters and affiliates), the outpouring of violently antisemitic rhetoric in response to the Israel-Hamas conflict, and Al Qaeda’s praise for Hamas field commanders in an official publication—representing a shift in Al Qaeda’s relations with Hamas—all suggest that Al Qaeda is recommitting to attacking Israel and Jewish people around the world.

Released at the beginning of the Muslim holy month of Ramadan, Al Qaeda’s  One Ummah magazine dedicates a third of its pages to the antisemitic conspiracy theory that Jewish people control global governments and trade as well as a condemnation of Arab leaders who have participated in normalization processes with Israel. The first article, “What Is Behind the Normalization with Israel,” suggests that Israel is using the political normalization process to eliminate Arab influence in the Middle East. When Israel has built up enough strength, the article predicts that more Jewish people will flock to Israel, create settlements throughout all of Palestine, and end with “the complete capture and domination over Islamic lands.” The article goes on to assert that the main goal of the normalization process is to erase Muslim culture and identity from the Middle East and that the process is being pushed by Jewish control of the global media and Western governments. It propagates the idea that Jewish greed will push Israel to take over more and more of the Middle East, and, in order to weaken the Arab states, Israel will push to destroy the Muslim faith because true Muslims will always be hostile to Israel.

The second article in One Ummah continues in much the same vein. Titled, “A Statement on the Ruling of Normalization with the Jews,” the article takes a slightly more scholarly approach to the issue of Israel and Palestine, citing condemnations by Islamist legal scholars of historical Arab-Israeli negotiations, as well as antisemitic passages from religious texts. Like the first article, the second piece asserts that the true end goal of the Arab-Israeli peace process is the “surrender, alteration, and cancellation” of Muslim autonomy and that those who cooperate with Israel are not true Muslims. The article also suggests that the United States’ special relationship with Israel should make Americans legitimate targets for “bara’a,” (Arabic for “disavowal) which in this context means that Al Qaeda’s supporters could be religiously encouraged to target, demonize, and ultimately attack Americans.

Following the conflict between Hamas and Israel in May 2021, Al Qaeda re-released the One Ummah magazine with an additional section, entitled “Love and Veneration and Support for the People of Palestine,” which continued to comment on the violence. The section called for “the beginning of the third intifada” which the authors hoped would allow the Arabs to overthrow the state of Israel. There have been two Palestinian intifadas, the first from 1987 until 1993, and the second from 2000 until 2005. Both involved sustained, often violent protests in the West Bank, Gaza, and within Israel. This call for a third intifada is worrying, given that prior to the second Palestinian intifada in 2000, Israel had been a relatively minor issue for Al Qaeda leadership. During the 2000 intifada, Al Qaeda began to see attacking Israel as a major priority and it released a blueprint for how the global jihadist movement would seek to annihilate Israel and reconquer the Middle East by 2020. Heavy counterterrorism pressure and the rise of competing extremist groups like ISIS slowed Al Qaeda’s plans, however, and it began to focus on expansion through its regional affiliates like Al Qaeda in the Arabian Peninsula and Al Shabaab.

However, recent events have shifted Al Qaeda’s focus back toward Israel, and its call for a third intifada signals that Al Qaeda sees an opportunity to reengage with the region. During the most recent round of violence between Israel and Hamas in May 2021, Al Qaeda’s central authority also coordinated a media campaign among its affiliate organizations to condemn Israel’s attacks in Gaza. Though many Islamist extremist groups released statements, Al Qaeda’s statements included some of the most vicious and blatant antisemitism. This is likely because Al Qaeda has the longest history of opposition to Israel and has absolutely no interest in gaining the sympathy of Western observers. Al Qaeda and its affiliates referred to Jews as pigs, apes, cowards and usurpers. They also called for attacks against Jews and Jewish interests worldwide. The Al Qaeda-affiliated Sander Media organization released a viciously antisemitic statement which encouraged attacks against Jews around the world, reading: “whoever can target Jews, let him do so anywhere they exist. Their embassies are in every country and so are their interests and their citizens. Pick a smart target that would be the most severe for the enemies of Allah. Let it [the target] break their backs with assassinations or individual acts. Target them from where they expect it least." Even Al Shabaab, a locally-focused Somali insurgent group and Al Qaeda affiliate, staged demonstrations against Israel and burned the Israeli flag to protest the state.

These recent statements and activities serve as a reminder that Al Qaeda operatives or supporters have successfully perpetrated a handful of deadly attacks against Israeli or Jewish civilians. For instance, in 2002 and 2003, Al Qaeda conducted or facilitated several notable attacks of this sort, targeting and killing people at historic synagogues in Tunisia and in Turkey, as well as at an Israeli-owned businesses in Kenya. Yet, Al Qaeda’s failure to launch a war against Israel damaged its reputation among many Islamist extremists, particularly because Al Qaeda has had proven success in other conflict theaters, especially in North Africa, Iraq, Syria, and the Lake Chad Basin. However, these conflicts have primarily killed other Muslims and have run counter to Al Qaeda’s stated goals of protecting the Muslim community by fighting non-Muslims.

The question of why Al Qaeda has failed to sustain a campaign of attacks against Israel is a complicated one. Part of the reason is undoubtedly the strength of Israel’s counterterrorism services. Israel has been particularly effective at combating Al Qaeda’s local activities before they become meaningful threats, which stymied Al Qaeda’s ability to build its capabilities. Another factor is Al Qaeda central leadership’s own ambiguity over the urgency of attacking Israel. Though, Al Qaeda’s official propaganda paint an image of a group determined to attack Israel or Jewish targets, Osama bin Laden’s second in command, Abu Yahya al Libi, wrote that jihad in Palestine was the individual responsibility of Palestinians, and current Al Qaeda leader Ayman al Zawahiri wrote in the 1990s that “the path to Jerusalem runs through Cairo,” meaning that other countries like Egypt could take precedence over attacking the Jewish state or Jewish people.

Compounding Al Qaeda’s difficulties in targeting Israel, Hamas has long been the dominant Islamist force in Palestine, and Al Qaeda and Hamas had a brutal and public falling-out in 2006 over Hamas’s participation in Israeli-led elections for the Palestinian Legislative Council. After a series of critical fatwas, Osama bin Laden himself declared Hamas to have relinquished any legitimacy as an Islamist organization by tacitly cooperating with Israel. The animosity between the two groups means that Hamas also taken steps to impede certain Al Qaeda operations in Palestine, making it challenging for the group to organize effectively there. However, in a major shift for Al Qaeda, its June 4, 2021 issue of Al-Nafir Bulletin, a regularly published official Al Qaeda publication, included praise for Hamas’s field commanders. While the praise did not extend to Hamas’s political leadership, the change in tone may indicate that Al Qaeda has begun to weigh executing attacks against Israel more heavily than its historic political animosities and hopes to once again unite followers under opposition to Israel.

However, this leaves Al Qaeda with the same conundrum it has faced for the past decade; Palestine remains too attractive as a propaganda target for the group to abandon it entirely, but it also risks further accusations of empty rhetoric if it continues to cite Israel as a major enemy without any evidence of Al Qaeda operations there.

The solution Al Qaeda is likely to be drawn to is launching attacks against Israel or Jewish populations around the world. It is particularly important to draw attention to Al Qaeda’s rhetorical targeting of Israel now, because Al Qaeda’s messaging will influence some other Islamist extremist groups in their goals. For instance, when Al Qaeda last increased its messaging around Israel in 2019, its affiliates began a campaign of high-level attacks which they claimed were protests against Israel immediately after.

Al Qaeda is motivated to attack Israel both for its propaganda value and to avoid accusations that it has become too weak to lead the Islamist fight. The group also anticipates gaining a valuable safe haven as the United States withdraws forces from Afghanistan, given Al Qaeda’s strong relationship with the Taliban. With the additional resources and organizing space, Al Qaeda may seek to increase its relevance in the Islamist extremist milieu by launching a campaign targeting Jews and Israel. Al Qaeda is a highly influential terrorist group, and its recent focus on Israel indicates that targeting the state may be a higher priority for the terrorist group going forward.