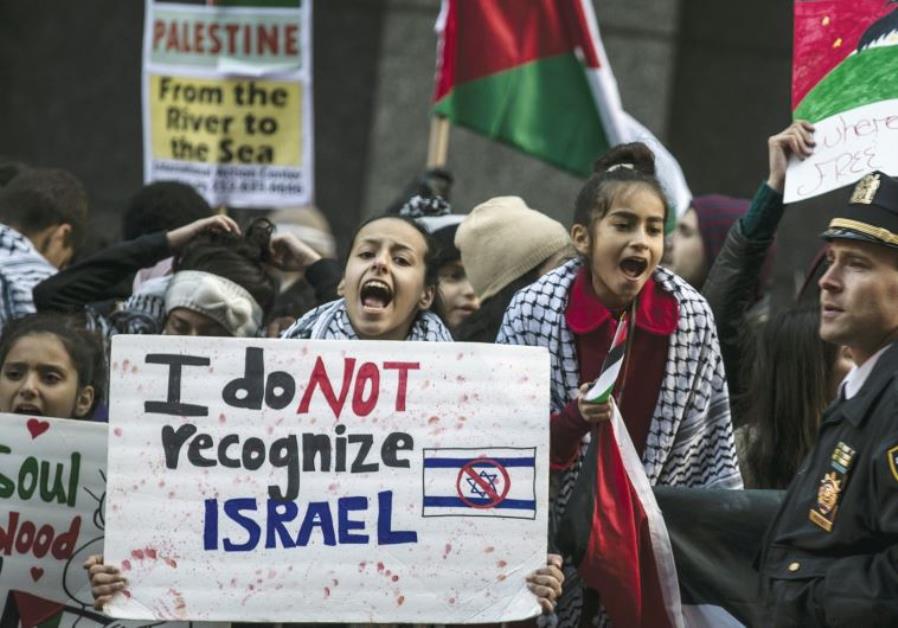 In reaction to President Trump’s announcement that the US would recognize Jerusalem as Israel’s capital and begin the process of relocating the US embassy to Jerusalem, there have been a number of anti-Israel protests and anti-Semitic incidents in major cities across the Middle East, Europe and North America.

Virulent anti-Israel protests were held in more than a dozen cities across the United States on December 8-10.

Many of the demonstrations were marked by extreme and anti-Israel and anti-Zionist messages, with some denying Israel's right to exist and others supporting resistance by any means. In addition, some speeches and signs equated Israel with Nazis.

In a few instances, the criticism seemed to cross the line into anti-Semitism:

On December 8, Palestinians protested and rioted throughout the West Bank, Jerusalem and Gaza. In clashes with IDF soldiers, more than 300 Palestinians were injured, and at least two killed. A number of rockets were also fired from Gaza into Israel, including one that hit an empty kindergarten in the southern town of Sderot. On December 10, a Palestinian stabbed an Israeli security guard near Jerusalem’s Central Bus Terminal, seriously wounding him.

In Beirut, thousands of Hezbollah supporters protested the decision, chanting “Death to America” and “Death to Israel.”

Further escalating tensions, Turkish President Recep Tayyip Erdogan vowed to use “all means to fight” against the US recognition of Jerusalem as Israel’s capital, saying that “Palestine has been under uninterrupted occupation since 1947,” and calling Israel an “occupying state” and “terrorist state” and a county “that kills children.” On December 11, Erdogan said that by recognizing Jerusalem, the US had “become a partner in this bloodshed.”

On December 7, a 29-year-old Palestinian broke the windows of a kosher restaurant in Amsterdam while waving a Palestinian flag. His lawyer said he was protesting the US announcement on Jerusalem.

A synagogue in Gothenburg, Sweden was attacked Saturday night by about 20 masked men. Molotov cocktails were thrown at the synagogue while Jewish teenagers were having a party in the adjacent community hall. Fortunately, no one was hurt and there was no significant damage. So far, three people have been arrested, including two Syrians and a Palestinian. In Malmo, two Molotov cocktails were thrown at the prayer hall at the Jewish cemetery at some point over the weekend, though no serious damage resulted.

The Swedish Prime Minister denounced both the synagogue attack as well as the anti-Semitic threats that were heard at a demonstration in Malmo on Friday, where some protestors reportedly shouted in Arabic, “We have announced the intifada from Malmö. We want our freedom back, and we will shoot the Jews.”

In London and Vienna, protesters chanted in Arabic, “Jews, remember Khaybar. The army of Muhammad is returning” (Khaybar is an anti-Semitic slogan evoking the massacre of Jews in Arabia 1400 years ago.)

Arrests were made at a demonstration in Berlin for anti-Semitic statements and for burning Israeli flags. Chancellor Angela Merkel, Interior Minister Thomas de Maizière, and Justice Minister Heiko Maas condemned the anti-Semitism and anti-Israel actions.

At the same time, it is important to note efforts to deescalate tensions.

"We are shocked and outraged by the wave of Antisemitic attacks and demonstrations that are spreading hatred against Jews in European cities over the last days. There can be no justification and we stand in full solidarity with the European Jewish communities in condemning these vile attacks in the strongest possible way.

"We expect the perpetrators of Antisemitic incitement to be prosecuted. European Jews must be able to live their lives in freedom and peace in Europe. This means rapid response to Antisemitic actions, but it also means educating our young. There is no place for Antisemitism in Europe, and in the joint battle against Antisemitism we should all work together to rid us from this ideology of hatred."