White supremacists and anti-Semites have been bombarding Jewish journalists with anti-Semitic tweets, particularly if the journalists have been critical of presidential candidate Donald Trump or his family. Anonymous tweeters whose background is unknown have also joined in the attack. 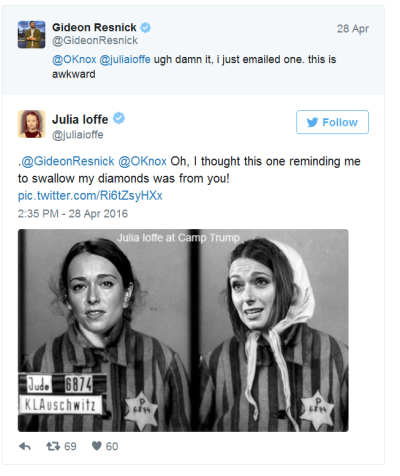 Journalists such as Julia Ioffe, Bethany Mandel, Jonathan Weisman and Ben Shapiro have all been targets of this campaign. Many of the tweets feature Holocaust imagery. Yellow Jewish stars with the word “Jude” are superimposed on the pictures of these journalists. There are also disturbing images of concentration camps and ovens directed at the journalists, as well as cartoons depicting anti-Semitic stereotypes.

While the actual identity of many of the people sending the offensive tweets can’t be determined, at least two well-known neo-Nazis have blatantly attacked Jewish journalists online. In a recent blog post, neo-Nazi Andrew Anglin went after Weisman, a New York Times reporter, who received an avalanche of anti-Semitic tweets after making a comment on Twitter regarding a negative article about Trump. In an earlier blog post, Anglin had also encouraged his followers to troll Ioffe on Twitter after she wrote a profile of Melania Trump for GQ magazine. 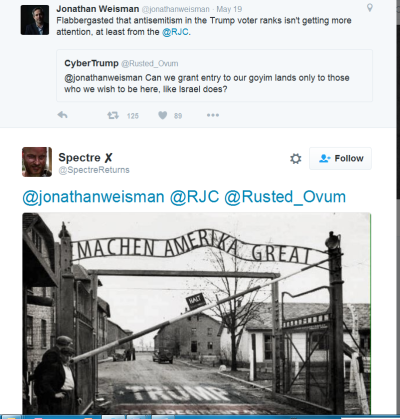 Anglin derided Weisman for publicizing the hateful tweets directed at him. Anglin alleged that Jewish journalists like Weisman and Ioffe had provoked the wrath of white supremacists. But Anglin went further, practically declaring that there is a war on with Jewish journalists. He wrote, “You’ve all provoked us. You’ve been doing it for decades—and centuries even—and we’ve finally had enough. Challenge has been accepted.”

Another neo-Nazi, Andrew Auernheimer--also known as “Weev”--tweeted at Weisman, “Get used to it you f---ing kike. You people will be made to pay for the violence and fraud you’ve committed against us.”

Anglin and Auernheimer are both adept at propaganda. Anglin uses his website, The Daily Stormer, to attack Jewish journalists and other Jews and encourages his followers to troll them online. Anglin himself was banned from Twitter after he ran a propaganda campaign with fake tweets about the Klan coming to the University of Missouri following some racial incidents at the school. Auernheimer is a well-known hacker who this year sent flyers advertising The Daily Stormer to dozens of printers located at universities across the country. 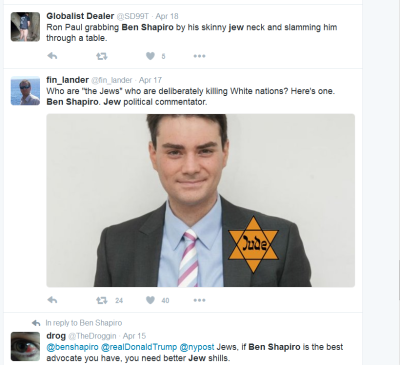 Both Anglin and Auernheimer are known figures who have used social media to attack Jews, but there are legions of anonymous Twitter users who are exploiting the Internet to carry out these anti-Semitic campaigns against Jewish journalists. While white supremacists used to promote their anti-Jewish propaganda on extremist forums and random websites, they are now able to mainstream their hate on sites used by millions of people and easily recruit others to join in their efforts.