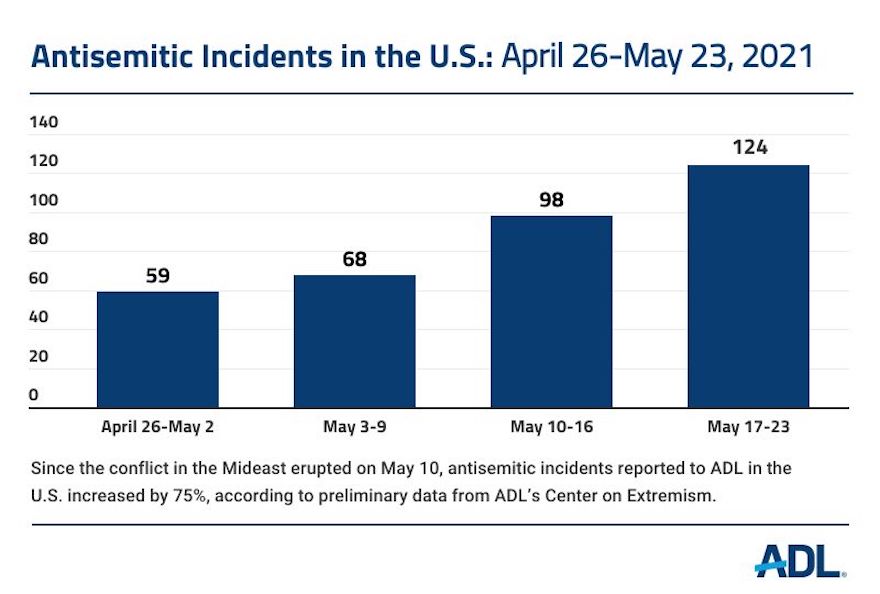 During the two weeks of military conflict between Israel and Hamas in May 2021, antisemitic incidents in the U.S. reported to ADL increased by 75% compared to the two weeks before the fighting began, from 127 to 222, according to preliminary data. (Also see update: Full data for month of May 2021). Many of these incidents appear to have been perpetrated by individuals scapegoating American Jews for the actions of the Israeli government.

The incidents have taken place at and around the approximately 200 anti-Israel rallies held across the U.S. since May 16. Although many of the rallies remained peaceful and did not include antisemitic language, some speakers, signs and chants included messages that attacked Jews and Zionists or trafficked in antisemitic tropes. A large majority of American Jews identify as Zionists or hold a connection to Israel to be an important part of their religious, social or cultural identities.

Recent examples of antisemitic incidents that include references to the Israel/Hamas conflict are listed below. For more information and the most recent developments, please see ADL’s Antisemitic Incident Tracker and the Center on Extremism’s “As It Happens:”

If you experience or witness an antisemitic incident, please use ADL's reporting tool.