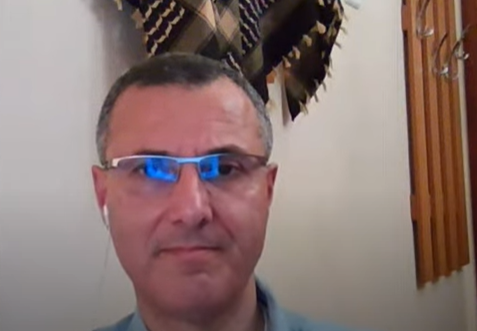 Appearing on a March 31, 2021 webinar organized by University of California-Berkeley lecturer and American Muslims for Palestine (AMP) board chairman Hatem Bazian, Boycott, Divestment and Sanctions (BDS) movement co-founder Omar Barghouti veered into troubling rhetoric, expressing support for what is essentially a litmus test conditioning Jewish participation in interfaith dialogue on condemnation of Israel.

Barghouti stated, “Interfaith dialogue is perfectly fine so long as it’s based on common grounds for groups, human rights, international law, and then you can discuss whatever else you want.” But he warned against “any interfaith dialogue that is used to whitewash war crimes, crimes against humanity and an apartheid regime.”

Such dialogue, Barghouti suggested, amounts to “faithwashing,” or the idea that organizers of interfaith dialogue strategically ignore alleged Israeli violations of Palestinian rights in order to promote a pro-Israel agenda.

As a prominent leader of the BDS movement, Barghouti has a large following and frequently speaks at anti-Israel events. His failure to rule out something approaching a vetting process for Jews, disqualifying those who do not agree with his claim that Israel has committed war crimes, crimes against humanity or is an apartheid regime, only detracts from the goal of building bridges between the Jewish community and other faith communities.

Though Barghouti couched his rhetoric in the universal language of human rights and international law, his wording strongly suggests that Jews should be excluded from interfaith dialogue if their Judaism incorporates support for Israel or Zionism in a manner that does not conform with Barghouti’s desired position on Israeli policies and practices. This type of rhetoric could fuel the antisemitic idea that individual Jews should be given a religious or political test and only those who reject Israel and Zionism be allowed to participate in interfaith dialogue.

The BDS campaign has long advocated a policy of “anti-normalization” by refusing to engage with Israelis, including those who verifiably have no official ties to the Israeli government, unless they have adopted positions akin to those of BDS. The group claims such connections would serve to validate Israel. On a number of occasions, prominent pro-BDS groups in the United States have gone so far as to explicitly bar dialogue with pro-Israel groups, speakers or even Zionists generally.

Surveys have shown a majority of American Jews view a positive relationship with Israel to be an important part of their religious, cultural or social identities. Whatever Barghouti’s intent may have been, there is legitimate cause for concern that his comments effectively promote the antisemitic idea that the Jews should be excluded from a critical form of intercommunal discussion unless they agree to disavow a connection to Israel.