The Enemy Of My Enemy Is Still…..A Jew 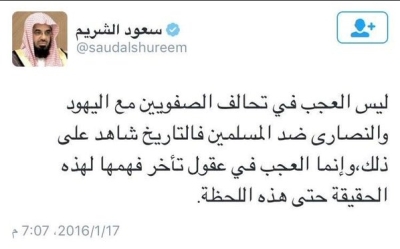 Over the past month, escalating tension in the Middle East between Iran and the Arab Gulf States helped fuel a resurgence of anti-Semitic statements and conspiracy theories about a supposed link between Israel and Jews to Iran.

Angered by Iran’s increasing influence in the region, prominent Arab figures including politicians, religious leaders and journalists have accused Jews and Israel of secretly supporting Iran and Shi’a Muslims in their war against the Sunni Muslim world.

Just last week, prominent Saudi scholar, Saud al-Shuraim, an Imam at the Grand Mosque in Mecca wrote the following statement on his Twitter account: “It is no wonder the Safavids [Iranians] ally with Jews and Christians against Muslims because history testifies that this is the case. What is strange are the minds which took too long to understand this fact.”

Some went as far as accusing “the Jews” of orchestrating Iran’s war against the Sunni Muslim world. Jordanian online news agency Ammon News published an article on January 19, titled “Iran started its holy war on the Sunnis with the blessing of the Jews.”

The online publication, Al Khaleej Affairs, which specializes in Arab Gulf States’ Affairs, interviewed Iraqi Sunni activist Falih Al Shibly on January 21 to talk about the Iranian involvement in Iraq. In the interview Al Shibly claimed, “Unfortunately, there is ignorance in the region about the Jewish supported Persian plot.” He added that “This plot is against all Arab countries from the Arabian West to the ‘Arabian’ Gulf.”

Other anti-Semitic accusations included conspiracy theories that the Jewish lobby in the U.S. is responsible for driving America’s policy in Iran’s best interests. Dubai Police Chief, Dahi Khalfan, whose bizarre statements in the past included accusing the Jews of being linked to the Muslim Brotherhood, claimed on January 18 that President Obama is of Shi’a roots and “the sons of Zion” [the Jews] helped him  reach presidency to “bring Iran and America closer.” Khalfan’s statements were widely circulated in the Arab world.

Such a claim about Jewish support for Iran was the subject of several tweets by former Manager of the Dubai Government Media Office, Dherar Belhoul Al Falasi, on January 11. He claimed that Jews revere Iran because it is considered a “holy” country in Judaism. He wrote “Jews revere Iran more than ‘Palestine.’”

The terrorist organization ISIS is capitalizing on this anti-Semitic trend as well. The featured article in their most recent English-language magazine Dabiq issue included a 14-page screed linking Jews and Shi’as. The back cover of the magazine also featured a full page image of Jews praying in a synagogue with a clear reference to the Jews of Isfahan in Iran.

This anti-Semitic rhetoric is more than just a delusional perspective. It is a tool that has been used time and again to galvanize Arab public opinion.

These conspiracy theories also fail to recognize both the very real threat Iran represents to the Jewish state and the centrality of anti-Semitic propaganda in the ideology embraced by Iran’s ruling regime. It is ironic that such accusations emerge while Iran is organizing  an international cartoon contest–on the Holocaust.

Tension between Iran and the Arab world has a long history, but it has escalated notably over the past few months as a result of the Iran nuclear agreement and growing concern among Arab Gulf States about Iran’s expanding regional influence and its involvement in Syria, Iraq and other parts of the Arab world. Both sides have used the media to propagate anti-Semitic accusations against the other through the lens of their own agendas. It seems that  Shi’as  and Sunnis can agree on one thing: blaming the Jews for their problems.

In the past, ADL documented a number of similar conspiracy theories in the Arab world including that ISIS has Jewish roots and that Israel and Jews are linked to the Muslim Brotherhood.