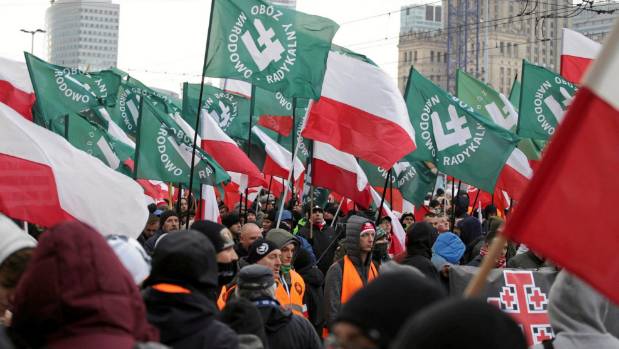 On Nov. 11, 60,000 Poles chose to celebrate Poland’s Independence Day by marching with organizations whose names, symbols and ideology are directly copied from anti-Semitic Polish organizations of the 1930s.

The National Radical Camp (ONR) and All-Polish Youth organizations want an ethnically and religiously homogeneous Poland. All white, all Catholic. No Jews, no immigrants.

Among the red and white Polish national flags were the green flags of the falanga, ONR’s symbol.

And among those green flags were signs that read, “White Europe” and “Clean blood,” according to The Wall Street Journal.

One participant told the Polish state television that he was marching, “to remove Jewry from power,” according to reports.

"This is alarming. This extremist rally in Poland's capital has grown in the past few years from hundreds of people to literally thousands," said Jonathan A. Greenblatt, CEO of the Anti-Defamation League. "What we saw in Charlottesville cannot be viewed in a vacuum. Far-right extremists in Europe are also being emboldened.  Like those in the U.S., they believe in 'ethnic purity' and are targeting immigrants, Muslims and Jews as scapegoats."

The leaders of the Warsaw march aren't just racist, they're anti-democratic. Robert Bakiewicz, an ONR organizer of the march told BuzzFeed News, “We just think it’s not efficient when everybody’s vote has equal power.”

Leaders of far-right extremist parties from Hungary, Italy, and elsewhere in Europe joined. American white supremacist Richard Spencer was expected to attend, since he had been invited to speak at an ideologically similar event the same weekend. The Polish government made clear that Spencer was not welcome in Poland, and he cancelled his visit.

Participation in the annual march has grown from hundreds at the first demonstration in 2009 to perhaps the largest far-right extremist event in Europe today.

Rafal Pankowski of the Never Again Association, an ADL partner in Poland and leading expert on far-right extremism, said, "It has become so much easier for people to say things they would never have said openly over the last 25 years.” He also noted that support for the far right is higher among youth than middle-aged and older Poles.

ADL's 2014 Global 100 survey revealed that about 45 percent of Poles hold anti-Semitic beliefs, with the figure slightly higher for those 18-34.