Extremist-Related Shootouts with Police Soar in First Half of 2020 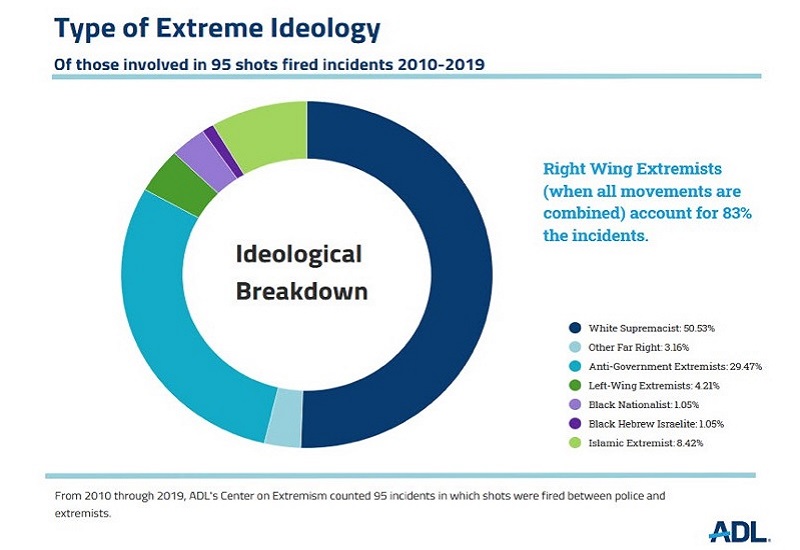 Carrillo is accused of killing Santa Cruz County Sheriff’s Sgt. Damon Gutzwiller and seriously wounding two other law enforcement officers during an ambush attack with gunfire and improvised explosives. The incident occurred when the officers responded to a 911 call reporting a suspicious van containing guns and bomb-making devices. 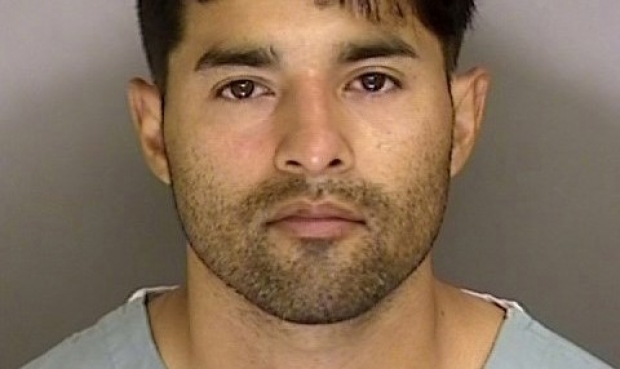 Carrillo is also a suspect in the May 31 fatal shooting death of a Federal Protective Services officer Dave Patrick Underwood and the wounding of another officer at the Ronald V. Dellums Federal Building during unrest in Oakland, California, surrounding protests following George Floyd’s murder.

ADL’s HEAT map tracks incidents in which gunfire is exchanged between police and extremists. From 2010-2019, ADL counted 95 extremist-police shootouts. Right wing extremists accounted for 83% of the incidents. Ninety-eight police officers were shot during these 95 incidents; 26 of those shootings were fatal.

The Ben Lomond incident marks the eighth incident and the third officer killed so far this year. If Carrillo is found responsible for the Oakland incident, the 2020 officer death toll related to extremist shootouts will rise to four and the incident count to nine. Notably, over the past decade, nine is the average number of officer and extremist shootouts per calendar year.

Shootout incidents in the first half of 2020 have all involved right wing extremists, including three white supremacists and five individuals holding views associated with the anti-government movement.

Ely, Nevada, March: John Dabritz, who has been described by law enforcement officials as displaying signs of anti-government extremism, allegedly shot and killed Nevada Highway Patrol Sergeant Ben Jenkins when he stopped to check on Dabritz, who had pulled over along a highway. Prosecutors believe Dabritz killed the trooper in order to avoid arrest for a series of recent shootings of propane tanks, tanker trucks, and wind turbine infrastructure, which prosecutors have described as acts of terrorism.

Geneseo, New York, March: Joshua Blessed, a truck driver from Harrisonburg, Virginia, was shot and killed during a shootout with police after police pursued him through three counties. The incident began when Blessed was stopped for speeding in Le Roy, but fled the scene, allegedly opening fire on pursuing officers. After the incident, officials conducting lawful searches of Blessed’s property found a stockpile of explosive devices. A review of Blessed’s online activity indicates that Blessed held extreme religious and anti-law enforcement views, and visited a website frequented by individuals associated with the anti-government militia movement.

Belton, Missouri, March: According to police, neo-Nazi Timothy Wilson was plotting to blow up a hospital in the Kansas City, Missouri area treating Covid-19 patients “in an attempt to cause severe harm and mass casualties.” Wilson was killed in a shootout with the FBI as agents attempted to arrest him. Wilson appears to be one of three individuals who received a membership patch during a November 2019, National Socialist Movement meeting in Ulysses, Pennsylvania.

Potomac, Maryland, March: SWAT officers with the Montgomery County Police department shot and killed Duncan Socrates Lemp while serving a no-knock search warrant for possession of weapons by a prohibited person. According to police, Lemp was in possession of a rifle at the time of the incident and refused to comply with their commands. Lemp appears to have been part of the anti-government Three Percenter movement and recently attended militia training in Kentucky.

West Point, Utah, February: Davis County Sheriff's deputies arrested Zachary T. Mendelkow, a wanted parole fugitive with white supremacist gang affiliations, after he allegedly pointed a firearm near a deputy's face and pulled the trigger several times. No one was injured during the exchange.

Kimberly, Alabama, February: Preston Cheyenne Johnson, a neo-Nazi and convicted felon, has been charged with capital murder in the shooting death of police officer Nick O’Rear, of Kimberly, Alabama. The incident occurred when police in Warrior called for backup after Johnson refused to stop for an expired automobile tag. When O’Rear responded to the call for help, Johnson allegedly fired shots from his vehicle and killed O’Rear.

Dayton, Ohio, January: Self-described sovereign citizen Derrick J. Lewis was indicted on charges of kidnapping and felonious assault for allegedly firing shots at the police and barricading himself inside his apartment with several hostages. After a 13-hour standoff, a police SWAT team forced their way in and rescued the hostages without injury.