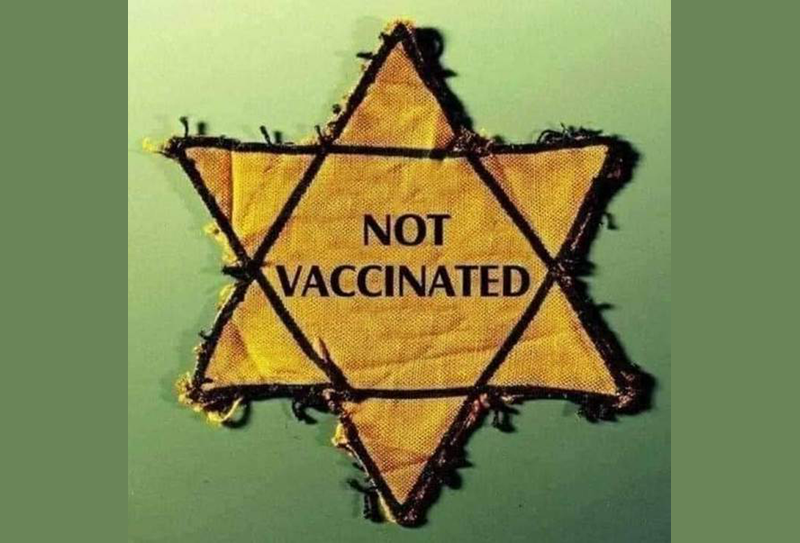 The Holocaust – the systematic murder of six million Jews and millions of others by the Nazis and their collaborators during World War II – stands out as a preeminent example of modern-day state-sponsored mass murder. Despite the Holocaust’s distinctive status, or perhaps because of it, politicians, activists and other public figures often invoke inappropriate Holocaust comparisons to highlight the ostensible “danger” of a social or political act.

Even with widespread efforts to educate Americans on the root causes and devastating impact of the Shoah, Holocaust comparisons have become commonplace, including among people speaking out against COVID-19 health mandates, imprisoned for the January 6 insurrection, protesting abortion, criticizing gun control measures and more. Except for extreme cases, such comparisons are generally not indications of antisemitic animus; however, they are often used to further a political agenda. Such references are outrageous and may be profoundly hurtful to Jews, many of whom lost family members or carry memories of the trauma suffered by their parents, grandparents and great-grandparents during the destruction of European Jewry.

Holocaust comparisons are also unacceptable when applied to the Israeli-Palestinian conflict. Claims that Israel is perpetrating a Holocaust against the Palestinians, or that Zionists are equivalent to Nazis, are not only historically specious, but also dangerously malign Israel and its supporters. Inappropriate Holocaust comparisons made in the context of criticizing Israel run the risk of fomenting blatant hostility toward Jewish people, a majority of whom identify with Israel and view a relationship with the Jewish state as an important element of their identity. Although Israel can be subject to criticism just like any other democratic nation, efforts to portray Israel as heirs to Nazi barbarism and brutality go far beyond legitimate criticism and may draw upon or reinforce age-old antisemitic stereotypes of Jews as demonic or uniquely evil.

The implementation of public health policies designed to curb the spread of COVID-19 in the U.S. sparked protests against state and local government officials. In numerous cases, critics of lockdowns, mask mandates and other restrictions invoked Nazi and Holocaust-related imagery and analogies in an attempt to compare government officials to Nazis and their policies to the Nazi persecution of Jews during World War II.

One particularly widespread use of this type of imagery involved comparing government officials to Hitler, including photoshopping Hitler-like mustaches on images of officials or creating signs that replaced Hitler’s name in the slogan “Heil Hitler” with the name of the U.S. government official. Others held signs depicting swastikas and the message “Arbeit Macht Frei” (“Work sets you free”), made infamous by its use on a sign at the entrance of the Nazi death camp, Auschwitz. 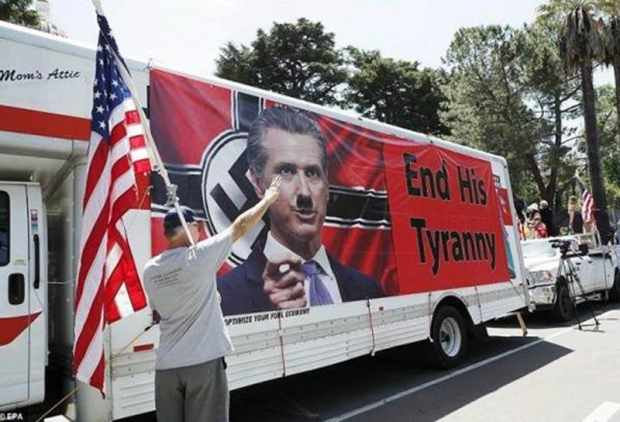 Nazi analogies also appeared from largescale public rallies to local government meetings. In August 2020,  a woman wore a yellow Star of David to a Kansas City Council meeting to protest the extension of the city’s mask mandate. At a Solano County Board of Supervisors meeting in November 2020, residents protesting the local mask mandate gave Nazi salutes and said “Sieg heil.” During the public comments portion of the meeting, the anti-mask protesters again drew comparisons between the COVID-19 policies and the Holocaust, with one resident asking, “Have we all forgotten where this prequel has been seen…The Nazis, the Bolsheviks…Every communist and socialist regime has used these same tactics.”

Lawmakers have also made inappropriate analogies between the Holocaust and COVID-19 policies. In April 2020, Idaho State Rep. Heather Scott criticized Governor Brad Little’s stay-at-home order, calling the governor “Little Hitler” and commenting that the pandemic-related policies were “no different than Nazi Germany, where you had government telling people, ‘You are an essential worker or a nonessential worker,’ and the nonessential workers got put on a train.”

In May 2020, Alaska State Rep. Ben Carpenter asked his fellow lawmakers if stickers being distributed at the State Capitol as part of new health screening measures would be “available as a yellow Star of David.” During a Kansas state legislative hearing in October 2021, State Rep. Brenda Landwehr claimed that mask and vaccine requirements represented “racism against the modern-day Jew.”

In addition to broader COVID-19 mandates and public health measures, vaccine requirements have been a focal point for Holocaust analogies in theU.S. Like with mask mandates and lockdown efforts, antagonists analogize these requirements with Nazi Germany, comparing vaccine cards to the yellow Star of David that Jews were obligated to wear during Hitler’s reign and equating the U.S. government to Hitler's regime. 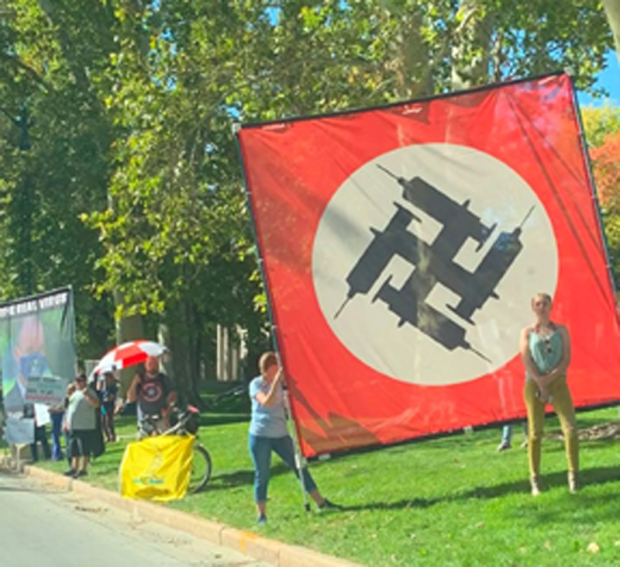 Holocaust comparisons have also been made in a wide range of other contexts related to various divisive political and social issues, such as the January 6 insurrection, climate change, abortion, free speech and gun control. Examples include the following: 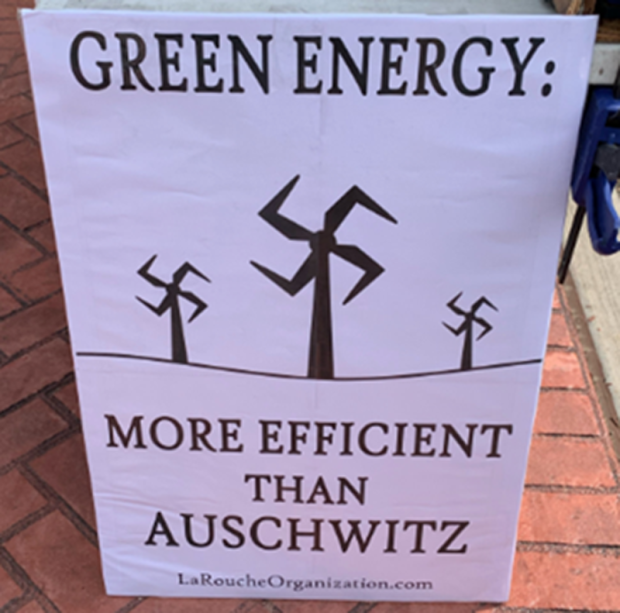 Posters displayed by the LaRouche Organization. Source: Reported to ADL

Criticism of Israel’s Actions Against the Palestinians

Anti-Israel activists and groups sometimes use offensive and inappropriate Holocaust comparisons to criticize Israel’s treatment of Palestinians. These analogies were regularly seen at protests and on social media during the May 2021 conflict between Israel and Hamas. In many cases, the comparisons not only criticized the actions of the Israeli government but served to vilify Zionists or Jews in general.