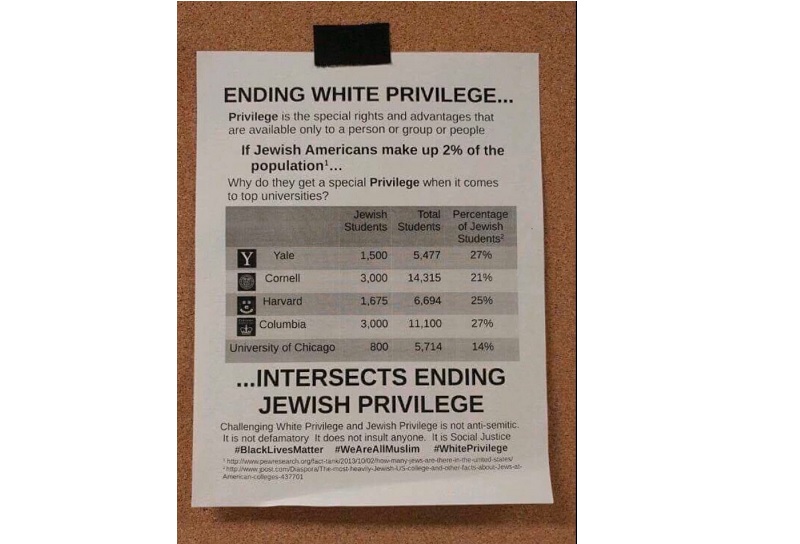 2017 - University of Illinois at Chicago

Soros Conspiracy Theories and The Protests: A Gateway to Antisemitism

In the midst of ongoing, nationwide protests in response to the murder of George Floyd by a Minneapolis police officer, an internet rumor has circulated accusing Black Lives Matter of distributing antisemitic fliers.

The flier reads, “Ending white privilege…intersects [sic] ending Jewish privilege,” and claims that Jewish Americans receive special privileges at leading universities. “Challenging White Privilege and Jewish Privilege is not anti-semitic [sic]. It is not defamatory. It does not insult anyone. It is Social Justice,” the flier says. It also includes the hashtags #BlackLivesMatter, #WeAreAllMuslim, and #WhitePrivilege.

The claim that Jews are able to manipulate institutions, including universities, to benefit themselves at the expense of non-Jews, is a classic antisemitic trope.

As of this writing, there is no indication that any Black Lives Matter activists have shared, printed or distributed these fliers during the current protests. Nevertheless, the fliers may have the effect of driving a wedge between Jews and Black Americans.

Speculation about this antisemitic flier comes at a time when other fliers promoting conspiracy theories are also circulating online, including some alleging that George Soros is involved in fomenting street violence.

Images of this flier have circulated online since at least as early as March 2017, when a news report reported that unknown perpetrators had distributed a physical flier at the University of Illinois at Chicago. At the time, a representative of Black Lives Matter condemned the flier, as well as several additional fliers bearing antisemitic messages and the #BlackLivesMatter hashtag.