"It's Okay to Be White" Fliers Target Campuses Nationwide 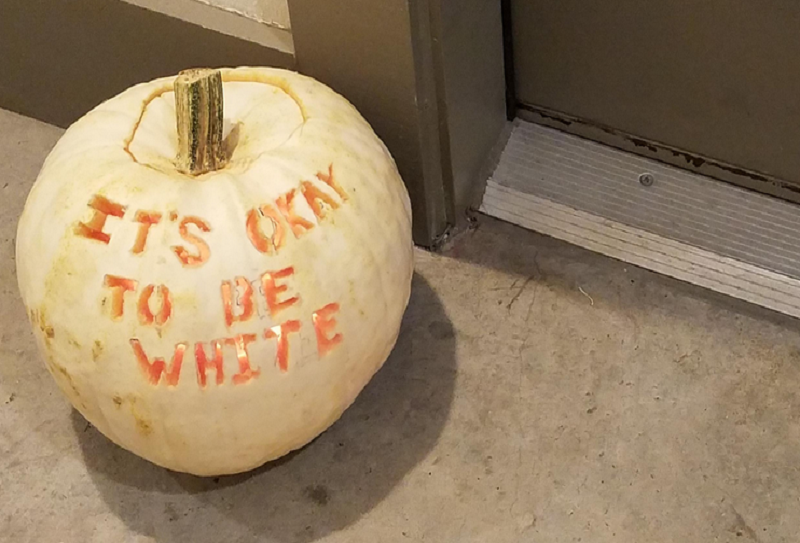 “It’s okay to be white” posters were reported on 14 college and university campuses in 12 states last week. The wave of flier postings coincides with a similar campaign that occurred last year at the same time.

The “It’s okay to be white” trolling campaign first emerged in October 2017 on 4chan, a  discussion forum infamous for instigating trolling efforts and for the studied offensiveness of many of its posts. It is also known for its association with the alt right segment of the white supremacist movement.

According to one 4chan post promoting the 2018 fliering event, the goal of the anniversary campaign was to build on the “huge success” of last year’s effort and once again “bait the left into revealing their hatred and racism towards white people for the voting public to see.”

Posted instructions asked participants to place “It’s okay to be white” posters (original design only) in public spaces and on campuses on October 31 and included the option to wear a Halloween costume with a mask “to blend in with trick-or-treaters for anonymity.” 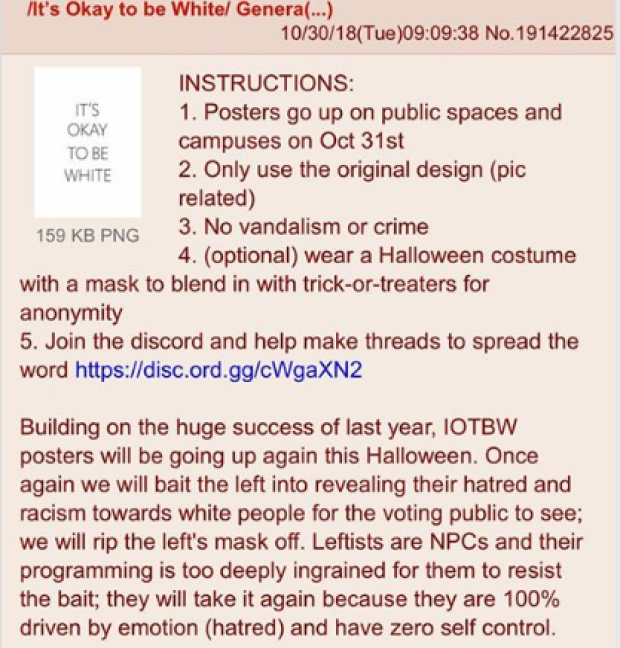 While the 4chan campaign was framed as “just” a trolling event, it appears that a number of overt racists and white supremacists participated.

At Cabrillo College in California, “It’s okay to be white” fliers were posted on a statue of Martin Luther King Jr. and pumpkins carved with swastikas were found in the vicinity of the fliers at Duke University in North Carolina.

“Texas Supremicist [sic]/@PinochetGang]” boasted on Twitter about having distributed 30-50 posters on October 31. 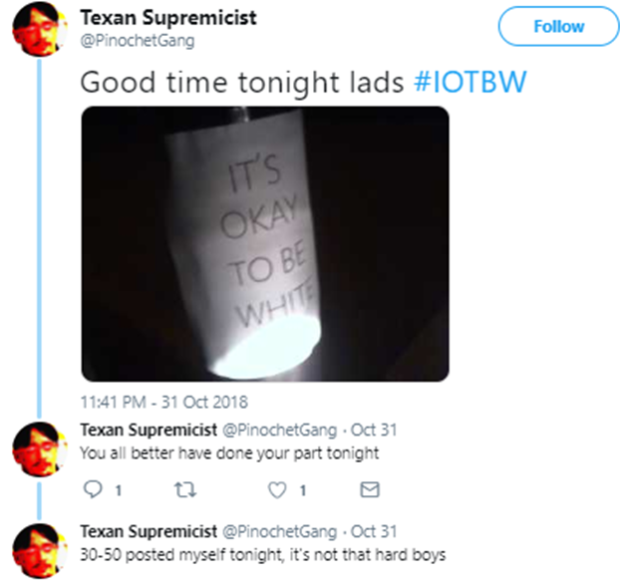 “It’s okay to be white” has a long history in the white supremacist movement. The white power music band Aggressive Force used the phrase as the title of a song that dates back to 2001. Additionally, ADL has tracked white supremacist fliers featuring the phrase since 2005, and Klan groups have used #IOKTBW on Twitter since 2012.

As they did in 2017, 4channers eagerly followed posts and media reports about their handiwork, making celebratory comments such as, “This is amazing and should become a yearly tradition” and “If this doesn’t wake up normies [a term for non-white supremacists] nothing will.”

On a thread about why the poster “triggers” everyone, one 4channer wrote, “Anyone who gets mad about that...is a scum bag who needs a rope.” The post was accompanied by an image of a flier that read, “It’s okay to hate kikes.”

From 4Chan, Another Trolling Campaign Emerges