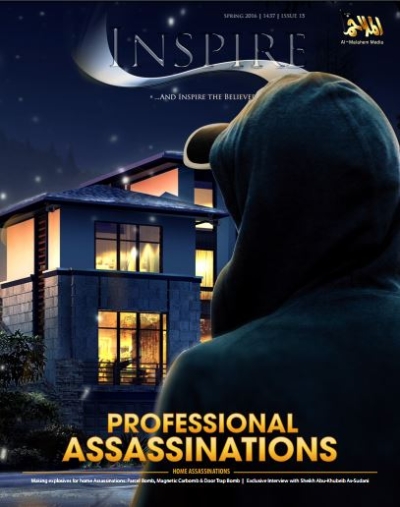 The 15th issue of Inspire, Al Qaeda in the Ara­bian Penin­sula (AQAP)’s Eng­lish lan­guage mag­a­zine, released on May 14, provides readers with instructions for murdering “the intelligentsia, economic and influential personalities of America.” Such attacks, claims the magazine, are “easy options that do not require huge efforts or man power, but the result is parallel to the big operations or even more.”

This incitement to kill individuals is the same attack strategy that was provided in the 14th issue of Inspire magazine (released in September 2015), but the 15th issue provides additional suggestions for making bombs to conduct the assassinations, including package bombs, small bombs under cars, and bombs that can be attached to a doorframe.

As in pre­vi­ous issues of Inspire, the mag­a­zine uses anti-Semitism and resentment of Israel to mobi­lize the anger and sup­port needed to encour­age indi­vid­u­als to sus­tain AQAP and per­pe­trate attacks. ADL pub­lished an updated report on anti-Semitism in Islamic extrem­ist propaganda in 2015.

This exploitation of anti-Semitic and anti-Israel sentiment was particularly evident in the article, “O Knife Revolution, Head Toward America.” In it, AQAP strives to export the current mode of Palestinian terror attacks in Israel to the U.S. by asking, “Where are the zealous Muslims in America, who clearly see their Muslim brothers in Palestine being tortured? It is because of this painful torture, that the blessed Knife Uprising has surfaced. Then way is it that you just sit and wait, with your hands tied up?”

That article further utilizes anti-Semitism to encourage attacks against the U.S. “It is no secret that the first guardian, supporter, and greatest inciter to the Jews are the Americans,” it states. It goes on to directly threaten Jews, asking “How many Jews are there in America, Europe and other kufr (apostate) countries? So take matters in hand and follow the advice of your Prophet, if any of you gets hold of a Jew anywhere, let him finish him off.” 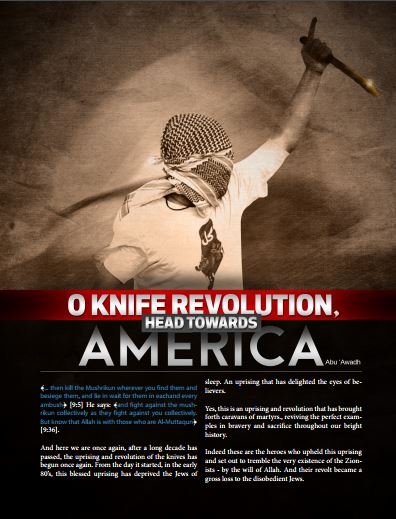 An article in Inspire 15 encourages knife attacks in the U.S. modeled after attacks undertaken by Palestinians in Israel.

Similarly, the article, “Let us Unite for Palestine,” clearly attempts to transfer anger against Israel to attacks against the U.S. by asserting “The liberation of Jerusalem…requires…two things: Firstly: Striking the West…. Secondly: Establishing a Muslim state in Egypt and the Levant.” AQAP is more interested in attacking the West and securing a foothold in Egypt and Syria than in attacking Israel, so the magazine tries to convince its supporters that these goals are inherently a part of destroying the State of Israel.

Yet another article, “Inside Obama’s Rationality,” suggests a conspiracy theory of Jewish influence in American politics: “everyone competes in pleasing the Jews, even the so-called rational Presidents compete with each other in proving who is the most biased, irrational, partisan president when it comes to supporting the Jews.”

Other articles directly promote any sort of lone wolf attacks against the U.S., while striving to ensure that Al Qaeda can receive credit for individual actions. The article “Jihad Upon Clear Insight” states “one can benefit from the publication of As-Sahab foundation (an Al Qaeda media foundation)…It explains the importance of lone jihad and its impact upon the enemy…. And he can also benefit from Inspire Magazine. A Lone Mujahid and others should know that this knowledge is not less important than the science of weaponry and how to use them, how to make explosives and charges.”

As noted, the cover article, “Professional Assassinations,” provides instructions for surveilling influential individuals and then building bombs to murder them.