Mass Shooting in Denver: What We Know 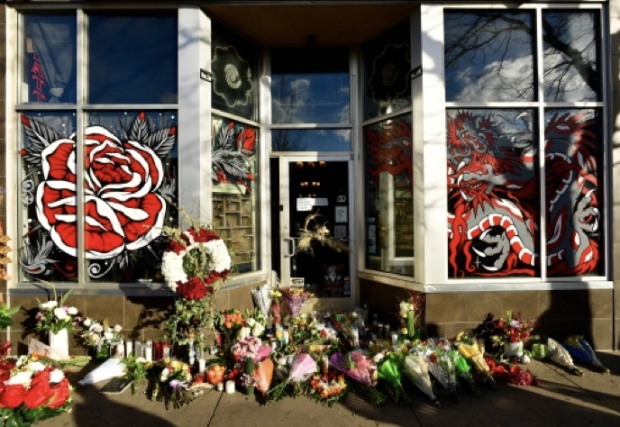 On December 27, 2021, Lyndon McLeod carried out a shooting spree spanning the Denver metropolitan area, murdering five people and wounding at least three others. Ultimately, McLeod died during a shoot-out with responding police. According to a review of his online footprint conducted by the ADL’s Center on Extremism, McLeod held numerous extreme or fringe beliefs but did not belong to a particular extremist movement, nor was he an active member of an organized extremist group.

As of December 31, 2021, there is no indication his beliefs inspired the attack, at least directly. The victims do not appear to have been selected at random but rather the majority of them allegedly had business or personal connections to McLeod. Law enforcement were aware of him and reportedly opened investigations into his activities in 2020 and earlier in 2021.

McLeod lived in Las Animas County in southern Colorado in a home he constructed with shipping containers, essentially living off the grid. This solitary life began after a business fallout in 2015-16 over All Heart Industry, a tattoo shop. McLeod subsequently claimed his business partners had conspired and committed fraud against him. He said he had fantasies of revenge, but instead decided to do something “creative,” channeling his feelings into a book project that eventually became his three-volume novel, Sanction, which he self-published in 2018-2020 under the name Roman McClay.

His rambling and graphic prose glamorized violence and revenge and expressed misogynistic themes and praise of traditional gender roles, with a particular fixation on “strong” men. In the novel, a key character, “Lyndon MacLeod,” spelled with just one letter different than his own name, travels to Denver in a fit of rage and murders 46 individuals whom he perceived wronged him over the years. Two of McLeod’s real-life victims, Alicia Cardenas and Michael Swinyard, actually appeared as victims in his novels. Other characters in the book are also fictionalized versions of McLeod or, in some cases, mouthpieces for his ideas.

While McLeod subscribed to a variety of right-wing beliefs, remarks in his social media posts, novels and interviews signal his place in the broader ecosystem of the “manosphere.” The manosphere is made up of a collection of different misogynistic belief systems and subcultures populated primarily by men angry at women specifically and society generally for their own failures in establishing meaningful relationships with women. These include incels and pick-up artists, as well as MGTOW (“men going their own way”) who eschew relationships with women.

McLeod adhered to a smaller subset of the manosphere that focuses on hyper-masculinity. Typically, advocates of hypermasculinity believe themselves to be “alpha males” and are frustrated they are not given the respect, deference or position in society they believe they are due. Adherents believe a degeneration of modern society has allowed weak “beta males” and women to usurp power from the “alphas.”

McLeod actually described himself as a “sigma male,” a term seemingly coined by himself for an alpha male loner or “rugged individualist.” He claimed that lesser men, “betas,” had their uses but should not be allowed to lead or to breed with women. Instead, leadership and breeding rights should be reserved to alphas and sigmas, although he asserted that most sigmas do not want to lead but prefer to act as advisers or consiglieri to alphas. 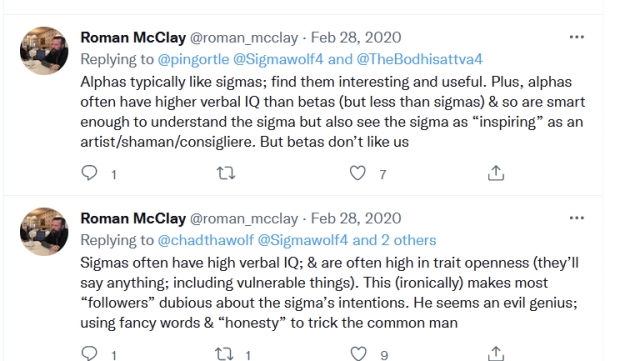 McLeod held ultra-traditionalist views towards women, whom he viewed as inferior to men in most respects. In one tweet, for example, McLeod claimed that he loved religion, because “all religions place a massive sanction on female premarital sex! Religion DEMANDS virginity in women!" McLeod believed alphas and sigmas should even have harems of women, arguing that “if people say the harem system is ‘unrealistic’ they don’t know any history, biology, or genetics.” Frequent passages in his books targeted women and highlighted the author’s misogynistic beliefs. For example, one passage from ​Sanction III asserts that “the things women won't admit about rape, that it slakes, that it enthralls, that—if done by a certain type of man—they don't hate it at all."

As part of his extreme fixation on masculinity, McLeod admired and glorified perceived warriors and warrior societies, with which he self-identified and viewed as “the 1%.” These included the Scots above all, but also a variety of other groups and communities, including the Hells Angels biker club, Comanche Indians and Maori warriors. McLeod posted the symbol of the militia-related Three Percenters to his social media, not out of an allegiance or connection to the militia movement, but rather because he approved of the myth behind the Three Percenters concept: that it was only a dedicated “three percent” of Americans who took up arms against the British during the Revolutionary War. He directly compared these soldiers to his admired “1%.”

McLeod also had a fascination with "male honor violence,” or what he viewed as warrior men pushed to a breaking point in an unjust society. In one tweet from November 2018, McLeod claimed that “my only half-original thought was this modern/liberal suppression of male Honor violence having the effect of destabilizing the state itself. Large numbers of innately aggro men fuming but with no release & then blowing up catastrophically."

McLeod directly correlates “honor violence” to his book, summarizing its plot as: “Our entire society is made up of shitty little fucks who insult badasses & get away with it because law enforcement & social norms protect the WEAK from the STRONG. I’m over it. The weak better buckle up…shit is about to get real.”

Given that his novel was both an explication of his opinions on various subjects as well as a fictionalized revenge fantasy, there is a question as to what degree the views he expressed in Sanction influenced his final real-world shooting spree or were themselves simply a rationalization or justification for the personal violence he wanted to commit.

Another facet of McLeod’s belief system is a strong emphasis on tribalism, which consists both of the claim that different societies produce very different types or qualities of people as well as the belief that one had to owe loyalty to one’s tribal community (which he viewed as based on race or ethnicity). McLeod went further by claiming that the different cultures produced by such societies were determined by genetics. For example, McLeod strongly believed Scottish culture is a superior, warrior-like culture (McLeod frequently self-identified as “96% Norse-Scot”). 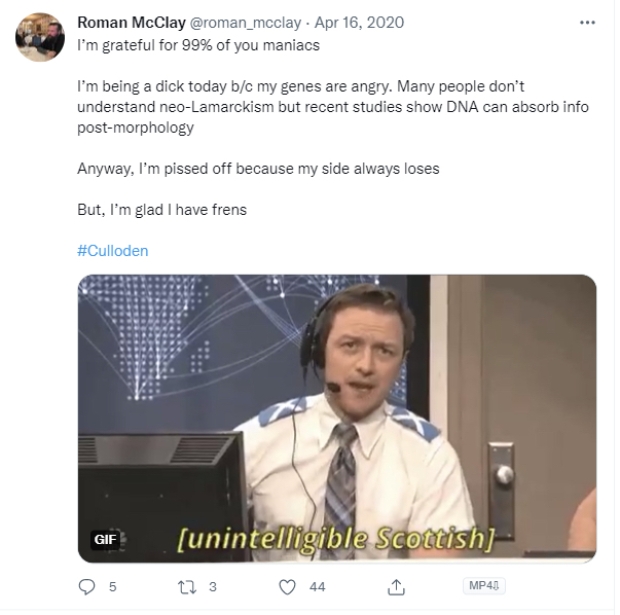 Tribalism often has a degree of inherent racism that in some cases extends to outright white supremacy. McLeod’s admiration for non-white “warrior” cultures such as the Comanche and Maori, as well as his admiration for individual non-white warriors such as Touissant Louverture, the key leader of the Haitian Revolution, suggests McLeod’s views had not evolved to full white supremacy, but there is plenty of evidence of McLeod’s racist views. In a Twitter post from June 3, 2020, in response to the George Floyd protests, McLeod claimed that “you don’t get tens of thousands of people willing to burn it to the ground unless they are biologically eager for it,” seemingly making a racist reference to a Black propensity towards violence.

Additionally, Sanction contains a number of racist pronouncements; for example, in one passage a character rants about “filthy Muslims and African freaks who are raping white women with impunity.” The character of the Inmate—a fictionalized version of a McLeod who had indulged in his violent fantasies—repeatedly makes racist statements, often employing the n-word.

Since the shooting spree, McLeod’s rampage, as well as his off-grid lifestyle, his obsession with male honor violence and “agro alpha men,” and his writings have resonated particularly among white supremacists.

Within a day of the attack, as the identity of the shooter became known, white supremacists began glorifying McLeod and his violence, anointing him to the pantheon of accelerationist “saints”—people revered by white supremacists for their acts of extreme violence.

Corona Chan News, a white supremacist and anti-vaccination Telegram channel, praised the attack: “Lyndon McLeod aka Roman McClay slaughtered 5 including shitskin Mexicans invaders, race mixers, a pig, and he was also a hardcore Anti-Vaxxer.” Another Telegram channel, Church of Aryanity, boasted that “the terror Saint McLeod’s attack generated will course through the System and linger in the back of our enemies’ minds forever…HAIL SAINT LYNDON MCLEOD.”

McLeod was also added to the “Saint Calendar,” a white supremacist calendar that glorifies past murders by extremist actors and was widely shared on Telegram after the killing spree. 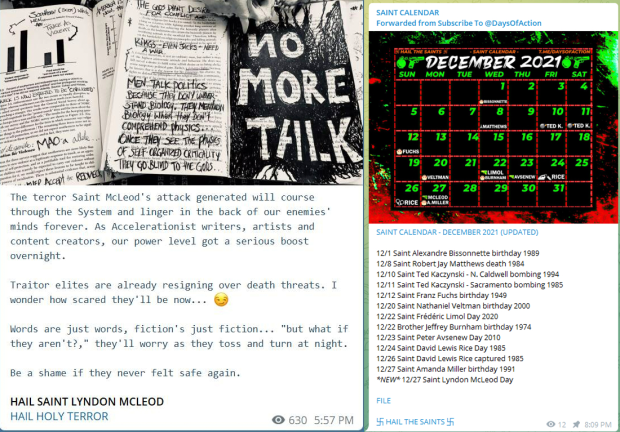 White supremacists glorifying McLeod’s attack and praising him as a “saint.”