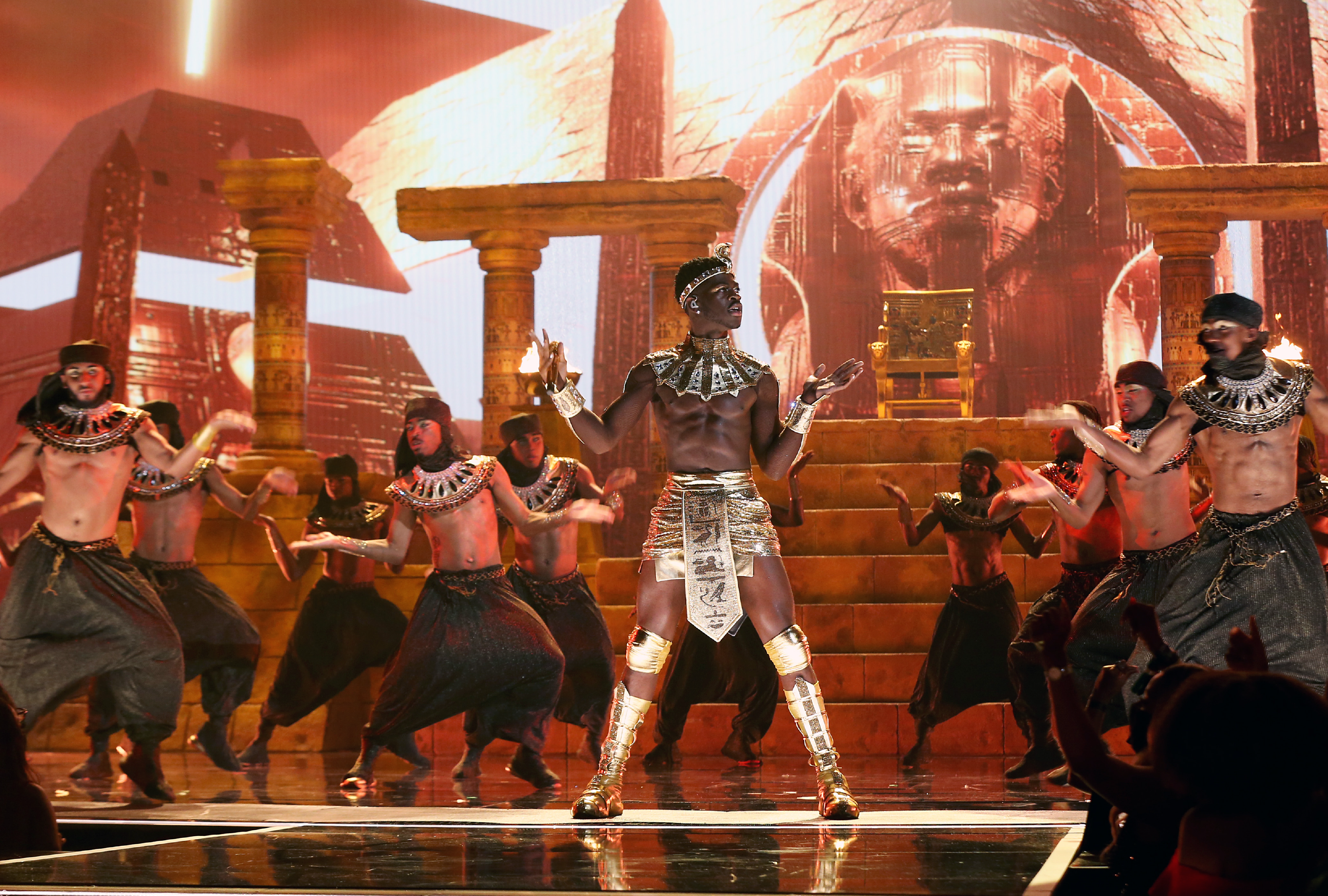 After the BET Awards—an annual awards ceremony which celebrates the achievements of Black artists and entertainers—aired on June 27, 2021, Nation of Islam (NOI) members were among those who voiced criticisms of the event, responding with their familiar anti-LGBTQ, antisemitic and conspiratorial rhetoric. Their accusations were directed at both the BET network and rapper and singer Lil Nas X, who performed his popular song “Montero (Call Me by Your Name)” during the broadcast. Lil Nas X, who publicly came out as gay in 2019, ended the performance by kissing a male backup dancer, sparking backlash from some NOI members and other viewers.

Some of the comments from NOI members about the BET Awards, which coincided with the last days of Pride Month, echoed NOI’s decades-old accusations about alleged Jewish and governmental control of Black people and how the so-called LGBTQ agenda is used to feminize Black men in order to prevent Black people from procreating. NOI’s longstanding anti-LGBTQ beliefs also include stating that being gay is unnatural and immoral, claiming that people are not born gay but are made gay through chemical manipulation and perpetuating the offensive trope that homosexuality is linked to pedophilia.

Rizza Islam, an NOI social media influencer and frequent proponent of anti-LGBTQ bigotry, shared multiple posts about Lil Nas X and BET with his 67K Instagram followers (his previous account with over half a million followers was terminated in early 2021 for violating Instagram policy.) He posted on the platform: “BET is NOT OWNED by BLACK PEOPLE. It is owned by VIACOM - Jewish people…It should make more sense now why certain things are being allowed and even ENCOURAGED on BET that we as Black people don’t necessarily agree with.” Rizza Islam also criticized the U.S. government, claiming that it is “pushing this agenda THROUGH certain people, music, movies, entertainment, cartoons and more…Our communities are losing control, infested with STD’s, teenage pregnancies, rape, molestation and more…Remember, DEPOPULATION IS THE GOAL.”

Wesley Muhammad, an NOI Student Minister and a member of the virulently antisemitic NOI Research Group, also commented, reaching more than 180K combined followers on Facebook, Instagram and YouTube. He posted a photograph of Lil Nas X wearing a dress on the BET Awards red carpet and added the caption: “It’s not organic. It’s a plan #TheWeaponizationOfHipHop.” Wesley Muhammad also used the opportunity to promote his claims about the “Pot Plot,” an antisemitic and homophobic conspiracy theory which alleges that Jews and the U.S. government manipulate certain versions of cannabis and other drugs to chemically alter the Black population and make Black men gay. 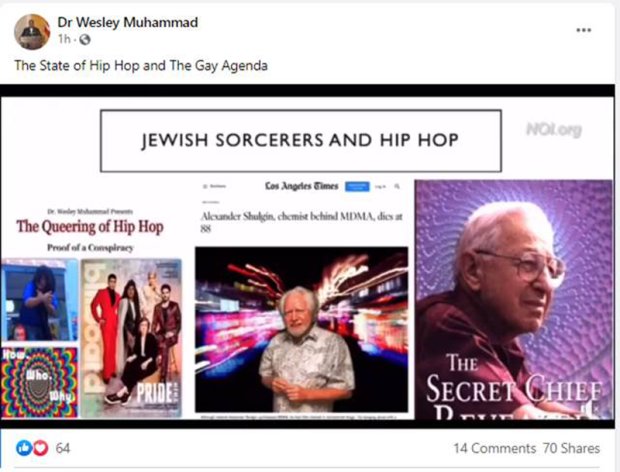 Screenshot of a video that NOI’s Wesley Muhammad posted on Facebook on June 29 about “The State of Hip Hop and The Gay Agenda.”

Similarly, Ilia Rashad Muhammad, another member of the NOI Research Group, criticized the BET network and Lil Nas X’s performance by sharing a video from his YouTube channel that was replete with antisemitic imagery and promoted conspiratorial claims about Jewish control of industries like entertainment, news media, and the government. “They’ll promote filth to our culture while censoring Truth & Facts,” he noted, using the hashtags #lilnasx and #betawards. 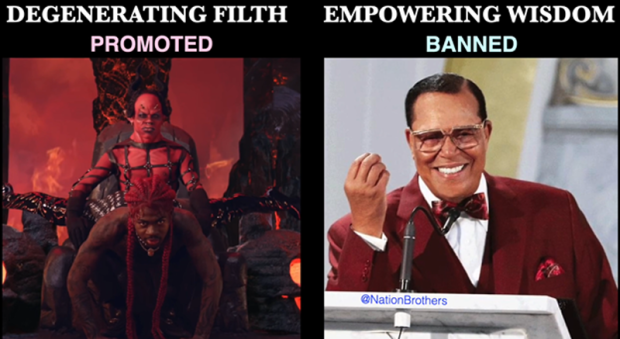 Screenshot from a video shared by NOI’s Ilia Rashad Muhammad, contrasting the alleged promotion of “degenerating filth” represented by the music video for Lil Nas X’s “Montero (Call Me by Your Name)” on the left and the banning of “empowering wisdom” from NOI leader Louis Farrakhan on the right.

Posts from other self-identified NOI members also promoted anti-LGBTQ and antisemitic tropes. An NOI member in Michigan commented on Facebook, “Lil Nas X is a puppet…Why do we only see black men being used by the Jewish community to promote their agenda to our youth?…There is an attack on the black masculine and the ultimate goal is the destruction of our race.” An NOI member in Texas posted a graphic on Twitter that was shared across multiple social media platforms, commenting that “in case you’re wondering why ‘BET’ has degraded…The ‘Rothstein’ or ‘Redstone’ Family. The white so-called Jews who now own BET.” 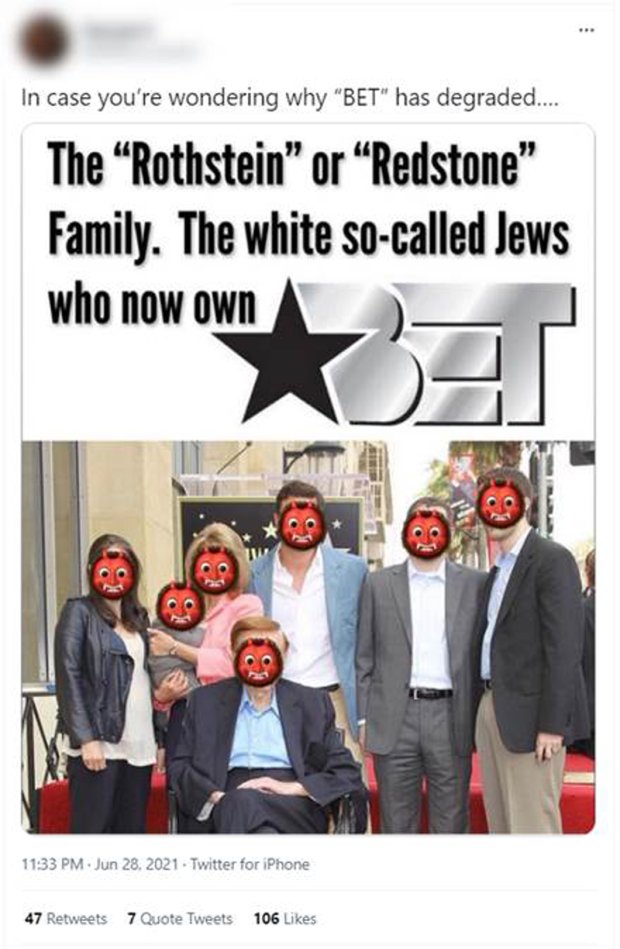 An antisemitic tweet from a Nation of Islam member criticizing the BET network after this year’s annual awards show broadcast.