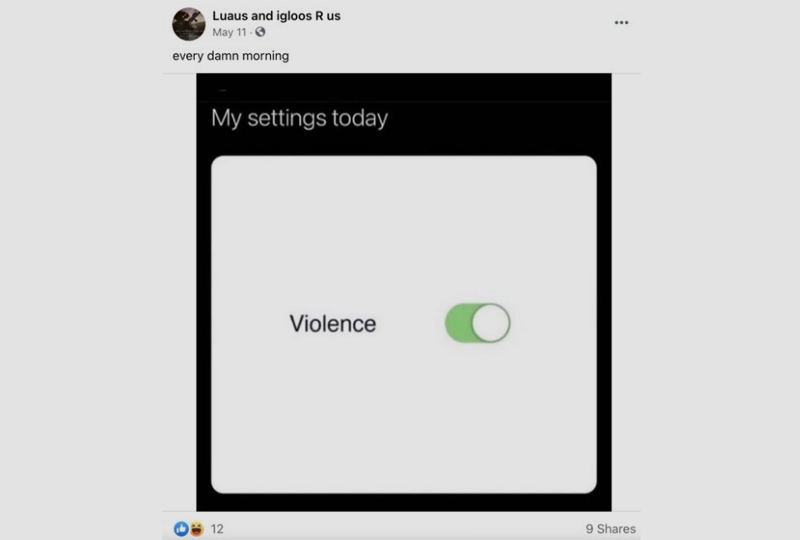 In June 2020, Facebook announced that it had taken down hundreds of groups and pages on its platform associated with the violent anti-government boogaloo movement, one of several major purges of extremist material by Facebook that year to address extremists’ use of its platform. Despite efforts by the boogaloo movement to camouflage itself to retain a Facebook  foothold, the social media company’s efforts were largely effective, and after the deplatforming, it became difficult to find large and active boogaloo spaces on Facebook.

However, in recent months, several new boogaloo pages have emerged on Facebook, hiding among libertarian groups and pages that also share memes advocating for violence. One of the ways they have been able to do this is by using unconventional naming structures for their pages (such as “Char Broil Tru infrared grilling”) that requires users to recognize the group’s intent via its content. Though these new Facebook boogaloo groups typically are far smaller and produce less content than their predecessors did in 2019-2020, the emergence of such pages highlights the need for Facebook to take a proactive stance to ensure that boogalooers do not successfully reestablish themselves on the platform.

One of the more active boogaloo Facebook spaces is the so-called Redacted Caucus of the Libertarian Party (RCLP), started in March 2021, whose public Facebook page has 1,294 likes as of June 17, and whose associated private group – which was created in May 2021 – has 304 members. The RCLP declares itself the “Official [REDACTED] group” and encourages members to share other “Luau and Fiesta” groups. “[REDACTED]”, “luau”, and “fiesta” are all common nicknames for the boogaloo, created to avoid detection and censorship, and to that end, the administrators advise members not share common boogaloo memes or boogaloo-related words.

Boogaloo groups like RCLP have been making an effort to reunite the boogaloo movement and to improve connectivity. RCLP has advertised several Zoom calls for supporters to meet each other, and even organized a real-world gathering in a Bay City, Texas restaurant. In a now-deleted thread, members shared links to thirteen other related communities on Facebook, some of which openly displayed their boogaloo affinities and many of which had hundreds of members.

Though other boogalooers attempting to survive on Facebook haven’t been as proactive as RCLP, they are still trying to establish networks that are more resilient to deplatforming. As the administrator for the private group, “The Class [R]eunion of 1776,” wrote on April 23: “The purpose of this group is to serve as a directory for new friends to meet and old friends to reunite. If a group gets zucked [i.e., deleted], post the replacement here for members to find it…Keep this group clean so it sticks around.” In a thread posted on April 20 to the group “Char Broil Tru infrared grilling,” users shared information about what boogaloo Facebook pages were left, and one user informed people that they could go to Reddit to find boogaloo content. 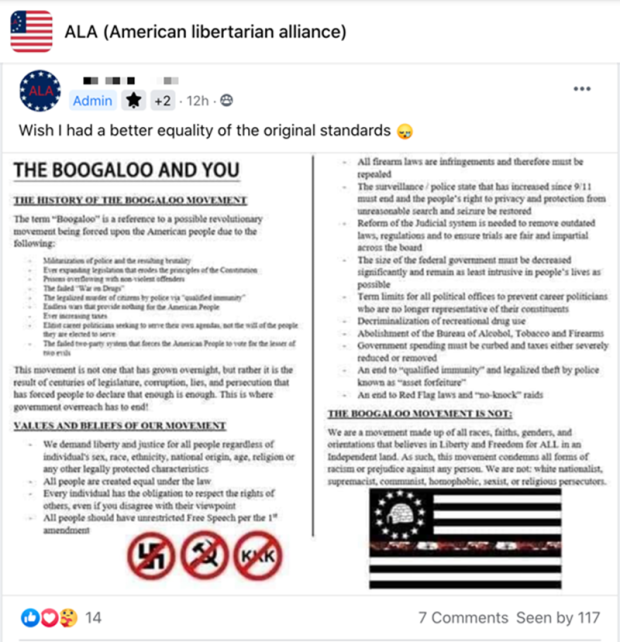 Some pages hide behind prosaic names to spread boogaloo content

Though the amount of boogaloo content on Facebook today is still only a shadow of its prior presence, what is there is no less concerning.  One can still find memes advocating for violence, encouraging people to target police officers, and glorifying the boogaloo cause. On June 4, boogaloo pages were filled with content honoring Marvin “Killdozer” Heemeyer, a Colorado man who became famous in 2004 for modifying a bulldozer into an armored vehicle, which he used for a destructive rampage until he committed suicide.  These memes celebrated Heemeyer, glorified his act of violence and encouraged others to follow his example.

Perhaps most concerning, Facebook algorithms appear to be recommending these boogaloo pages to like-minded users, despite the company’s assertion last June that it would no longer do so, followed by broader statements around not recommending groups tied to violence in September 2020 and an even broader statement in March 2021 stating that Facebook would be ending all recommendations for “civic and political groups, as well as newly created groups”. A recent review found that among groups sharing violent memes and a group simply named “Let’s Overthrow the Government”, Facebook was recommending groups with names like “The Hawaiian Hootenanny,” “Boogagoonia,” and “The Chaplain of the Redacted.” In addition, after one boogaloo page was “liked,” our investigation’s user was suggested other pages with similar content, creating opportunities for users to get further steeped in the ideology.  Clearly, Facebook’s recommendation algorithms, filters and other detection methods for boogaloo content need upgrading. 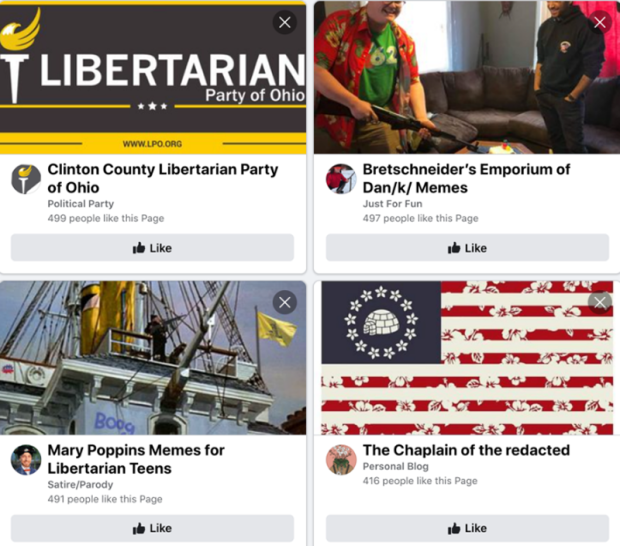 Last summer Facebook demonstrated that it does have the ability to detect, trace and severely damage extremist networks exploiting its platform.  The recent return to Facebook of the boogaloo movement – even in a limited capacity – illustrates the need for social media platforms to remain vigilant, to always be on the lookout for re-infiltration, and to take prompt action once such maneuvers are discovered. 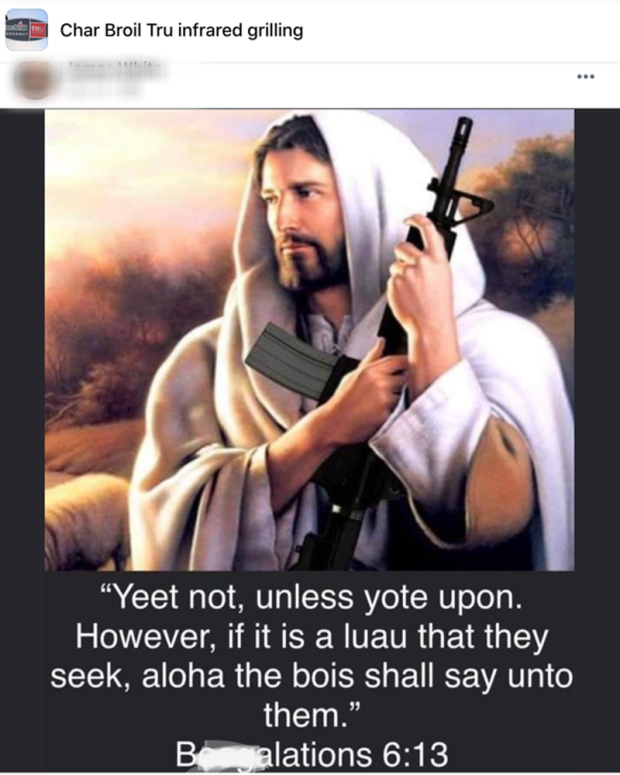 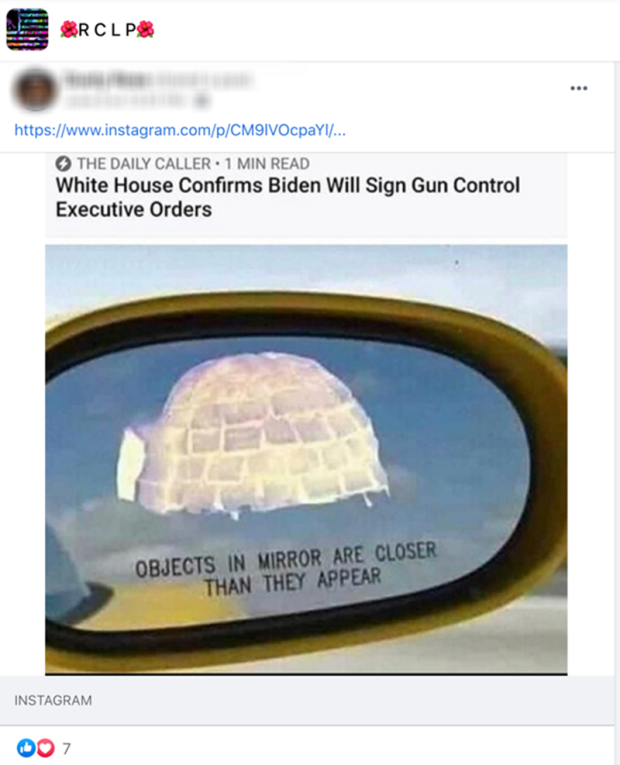