The irony was thick this week when a Massachusetts rabbi wrote a blog piece musing about the dangerous effects of online trolling, citing the neo-Nazi website The Daily Stormer as a prime perpetrator. A Daily Stormer writer immediately pounced, posting a story ridiculing the rabbi’s concern and encouraging readers to, yes, troll her via Twitter (he provided the rabbi’s handle) “to thank her for spreading degeneracy among the Jews, or for helping spread our fame to her congregation.”

Unfortunately, this rabbi is only the latest victim of white supremacists’ virtual attacks; online targeting and harassment has reached a fever pitch, and white supremacists and other extremists are in attack mode.  Just ask the thousands of Jewish journalists who were relentlessly attacked on Twitter throughout the 2016 presidential campaign, members of the Jewish community in Whitefish, Montana, or employees and patrons of the Comet Ping Pong pizzeria in Washington, D.C.

Trolling – targeting a person or group with a deluge of online hate in an attempt to silence or intimidate — is now a go-to tactic, and screeds encouraging online attacks – and explicit instructions on how to do so effectively — are popular weapons in the white supremacist arsenal. As a poster to the Stormfront message board wrote in January: “We’re at war against the Left. All weapons should be at our disposal — including doxxing. It’s not illegal… Leftists should therefore be doxxed.” Doxxing is the practice of publishing an enemy or opponent’s personal information, which can range from an email address to the names of family members. There was consensus on the Red Ice Radio site: “Trolling always works. It’s just another form of subversion.”

Sometimes, targeting is a response to a perceived “wrong,” as was the case in January, when a group of

Philadelphia public school teachers announced an optional week of “Black Lives Matter” programs and lesson plans. In response, an administrator of the White Lives Matter Facebook page posted: “EVERY SINGLE ONE OF US SHOULD BE CALLING THIS PLACE…AND LETTING IT RIP ON THESE PEOPLE,” and included a link to audio of a guy named Todd Biro leaving a message at Philadelphia’s U School, leaving only his first name, referencing his four “white children” and threatening to “file a class action lawsuit against each and every teacher who wears a Black Lives Matter shirt and offends my children who attend that school.” He signed off with “This is your final warning.” Biro lives in upstate New York, so it’s extremely unlikely that his children attend school in Philadelphia, but he knew his call would have more impact if he pretended to be local.

When he finished the call, Biro told his listeners, “This is exactly what we need to do. We need to make a lot of these calls and we need them to be recorded.”

Not even neighborhood pizzerias are safe from targeting campaigns. In the fall of 2016, near the end of the divisive presidential campaign, extremist pro-Trump posters took to 4chan and Twitter to “suggest” that Comet Ping Pong, a pizzeria in Washington, D.C. with loose ties to Democratic strategist John Podesta, was actually a front for an underground child sex trafficking operation. This bizarre lie was broadcast across a number of websites known for their dubious grasp of facts, including InfoWars and Conservative Daily Post, inspiring a stream of violent threats against the restaurant’s owners and employees. In December, a man arrived at Comet Ping Pong with an assault rifle, ready to “self-investigate” the sex slavery claims. He was arrested after firing three shots into the restaurant. No one was injured. A month later, another man was arrested in Louisiana for making threatening phone calls to a second pizzeria, telling staff that he was going to “save the kids” and “finish what the other guy didn’t.”

While institutions are often caught in extremists’ crosshairs, individuals can easily be targeted as well. When four-year-old Sullivan Wood’s mother posted a picture of her daughter (dressed as Hillary Clinton) with the former presidential candidate, the photo went viral, and caught the attention of trolls, who reposted the photo as a meme that included a string of violent and sexual terms. After Wood’s mother contacted the ADL for help, the photos were quickly removed.

In the summer of 2016, actress Leslie Jones left Twitter after she was targeted by Milo Yiannopoulos, who spearheaded a campaign of hateful, racist messages — including death threats — against the Saturday Night Live and “Ghostbusters” star.

Late last fall, as Donald Trump prepared to take office, dean of Harvard College, Rakesh Khurana,expressed support for undocumented students. A blog post on Peter Brimelow’s racist, anti-immigrant website VDARE urged readers to call Harvard to express their displeasure, and called on law enforcement to subject Khurana to “criminal prosecution” for “open defiance of the immigration laws of the United States” and declared that the administrators should face “criminal prosecution.”

It would appear that these calls for action went unheeded; in February, Harvard and Khurana named a “Fellow for Undocumented Students” to act as a counselor of sorts to the school’s estimated 40 undocumented undergraduate students.

Unsurprisingly, a fair number of online attacks are rooted in base anti-Semitism. That’s especially true in the case of Andrew Anglin, the founder of the neo-Nazi website The Daily Stormer.  Despite being banned from Twitter himself, Anglin has orchestrated a number of Twitter attacks on (primarily Jewish) individuals and communities. Neo-Nazi and Anglin associate Lee Rogers – who runs the InfoStormer (formerly The Daily Slave) website – will often echo Anglin’s call for targeting. Rogers is also banned from Twitter.

Anglin refers to his followers as the Stormer Troll Army, and has directed them to attack, among others, British Parliamentarian (MP) Luciana Berger, journalist Julia Ioffe(both of whom are Jewish), and members of the Jewish community in Whitefish, Montana. 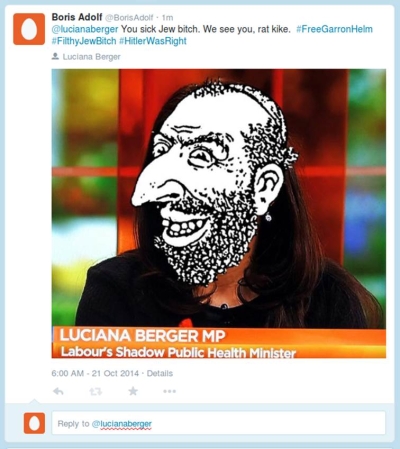 In October 2014, Anglin’s trolls attacked Berger after a British white supremacist who had harassed and attacked the MP online was sentenced to four weeks in jail. In an effort he referred to as “Operation Filthy Jew Bi--h,” Anglin urged his followers to “Tweet at this communist Jew bi--h,” and provided a screenshot of Berger’s Twitter bio, as well as hashtags to help identify the messages (including #HitlerWasRight). Anglin also helpfully provided an example tweet: “You sick Jew bi--h. We see you, rat kike.”

Several weeks later, Lee Rogers deemed the attacks “a remarkable achievement” after the resulting uproar prompted serious questions about Twitter’s policies and the company’s dueling responsibilities to protect free speech as well as the safety of its users.

In the spring of 2016, Anglin trained his sights on Julia Ioffe, directing his followers to target the Jewish journalist who wrote what some perceived to be a vaguely critical profile of Melania Trump. The deluge of hateful, anti-Semitic messages left Ioffe shaken, and Twitter once again in the spotlight.

In early 2017, as the Jewish community in Whitefish, Montana, was struggling with the fallout from the newfound fame of Richard Spencer, a Whitefish native and white supremacist, Anglin instructed his readers to launch online attacks on specific Jewish individuals, publishing their names, phone numbers, addresses and social media accounts. He also pledged to hold a neo-Nazi march on Martin Luther King, Jr., Day, but was stymied by his own (possibly intentional) inability to correctly fill out a basic parade permit form. The march never took place, and the entire effort appears to be part of Anglin’s attempts to intimidate the Whitefish community.

Occasionally, attackers suffer consequences for their targeting campaigns. On February 3, Reddit, the popular messaging site, shut down three high profile “alt-right” forums after discussion surfaced about a bounty for anyone who could identify the person who punched Richard Spencer in the face on Inauguration Day. The bounty was posted on WeSearchr, a controversial public information website ostensibly designed to help reporters, but which many in the “alt-right” use to identify and harass opponents.

It’s worth noting that online targeting is not a one-way street: anti-racists and anarchist groups (including Anonymous) have a long history of encouraging cyber-attacks on white supremacists and other right wing extremists. In January, for example, white supremacist Richard Spencer’s new address in Alexandria, Virginia, was widely publicized and quickly became a focal point for community protests. Spencer said he plans to use the Virginia space to establish an “alt-right hub.”