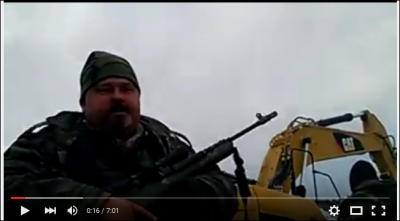 Occupier Sean Anderson cradling an assault rifle and urging people to come to the Malheur National Wildlife Refuge appeared on a YouTube live stream earlier today and said: “There are no laws in this United States now. This is a free for all Armageddon. Any leo, or military, or law enforcement, or feds, that stand up and fuck their oath, don’t abide by their oath are the enemy. If they stop you from getting here … KILL THEM!”

3:23 PM (EST) Dave Fry, an Ohio resident still occupying the wildlife refuge after the arrests of several cohorts yesterday made anti-Semitic comments in his live feed at the refuge. Fry spoke about “fake Jews,” a term used by a number of white supremacists and conspiracy theorists who believe that many people who call themselves Jews today are not truly Jewish but are descended from a race of people called the Khazars.  Drumming up anti-Semitic myths, Fry claimed that “fake Jews” believe “they’re superior to people,” are “evil” and “do a lot of evil things with their money.”

3:10 PM (EST) Occupier Victoria Sharp’s audio account claiming LaVoy Finicum was murdered has been shared nearly 3,500 times on Facebook alone, leaving aside other places, as extremists attempt to turn Finicum into a martyr for the anti-government causes.

1:31 PM (EST) Occupiers at the Malheur National Wildlife Refuge have begun using heavy machinery - apparently either to dig a trench or to build an earthen barrier, presumably to impede entry.

1:26 PM (EST): The current leader of the Oregon standoff appears to be Jason Patrick, who took over the role from Blaine Cooper early Wednesday. Patrick, who was at the Bundy Ranch in 2014, is an anti-government extremist and Three Percenter known in his home state of Georgia for his outbursts against law enforcement and court personnel, and for his attempts to bring video cameras into courtrooms.

12:51 PM (EST): Reacting to the evolving situation in Oregon, the anti-government extremist Pacific Patriots Network issued a “Stand By” order to their members and followers. “Cooler heads must prevail,” they announced. “We do not wish to inflame the current situation and will engage in open dialogue until all the facts have been gathered.” Based on previous, similar incidents, this is the expected response from most organized groups, who tend to understand the futility of engaging the federal government’s firepower. Individuals tend to be more volatile (and less predictable) in these situations.

12:28 PM (EST): Right-wing talk show host Glenn Beck issued a statement on Facebook Wednesday morning, writing that he was “deeply saddened by the loss of life” in Oregon, but that the protesters at Malheur should not have been armed. Because they were so vocal about their commitment to using violence, as necessary, to defend their beliefs, Beck argues, “The[ir] cause was lost before it began.”

11:52 AM (EST): As tensions increase, so too does the apparent rhetoric by some of the standoff participants. During a live feed of the standoff on YouTube, a male can clearly be heard saying “There will be a shootout… None of them are safe. When I get outta here, I’m gonna hunt them down!”

11:45 AM (EST): Michele Fiore, a Nevada state assembly person, has taken to Twitter to repeat the extremist claim that LaVoy Finicum was murdered by the government. Fiore is an ally of Cliven Bundy, the anti-government extremist whose standoff with authorities in 2014 in Nevada inspired his sons to seize the wildlife refuge in Oregon.

11:31 AM (EST): Sup­port­ers of the siege at wildlife refuge in Ore­gon, includ­ing Twit­ter users as well as 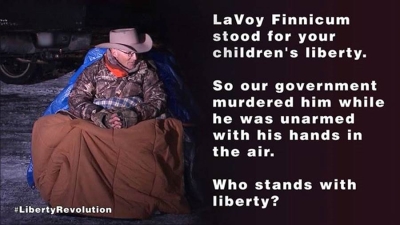 white suprema­cists on Storm­front , are cir­cu­lat­ing an image of LaVoy Finicum in an attempt to turn the extremist into a right-wing martyr. Finicum allegedly was killed while charging law enforcement officers who were attempting to arrest Finicum and other occupiers. The meme repeats an extremist claim circulating on the Internet that Finicum was mur­dered while unarmed and with his hands in the air.

11:20 AM (EST): The remaining extremists at the Malheur National Wildlife Refuge standoff are still defiant and  not ready to surrender to authorities. Duane Ehmer of Irrigon, Oregon, and off and on participant in the standoff, said on Facebook that “now the wolves are at the gate, Were [sic] are those Oath keepers.” He is referring to the anti-government extremist group that often injects itself into conflicts. More information on the Oath Keepers.