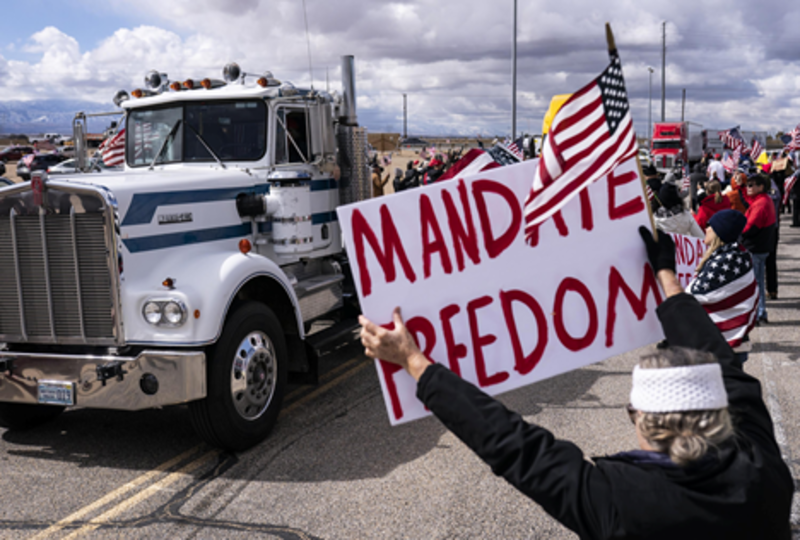 On February 23, 2022, the People’s Convoy trucker demonstration, ostensibly aimed at ending nationwide COVID-related policies, departed the Adelanto Stadium parking lot in Southern California, bound for Washington, D.C. Smaller convoys, like the one that launched the same day in Scranton, PA, are being planned in several states, but the People’s Convoy is the most organized and high-profile of these protests. While there is no evidence of extremist groups mobilizing en masse to join or formally support the trucker protest, and we do not consider this to be an extremist event, several People’s Convoy organizers have ties to extremist groups and movements, including the anti-government Three Percenters militia movement and QAnon.

Billed as a peaceful protest to end COVID-19 vaccine mandates and the national emergency that has been in effect since 2020, the People’s Convoy, which follows a drawn-out similar demonstration in Canada, announced via press release that it would “abide by agreements with local authorities and terminate in the vicinity of the DC [sic] area,” rather than entering the city proper. This pledge apparently did not assuage concerns; on February 22, the Pentagon approved the deployment of several hundred National Guard troops to assist with traffic on the Capital Beltway and potential protests that may take place in conjunction with the convoy’s arrival.

On February 21, the People’s Convoy official Telegram account shared and pinned a video update from Rohde, which ends with Rohde displaying a Three Percenter hand gesture. 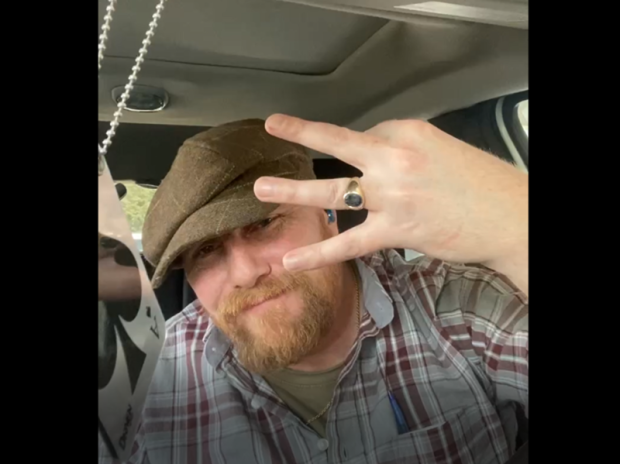 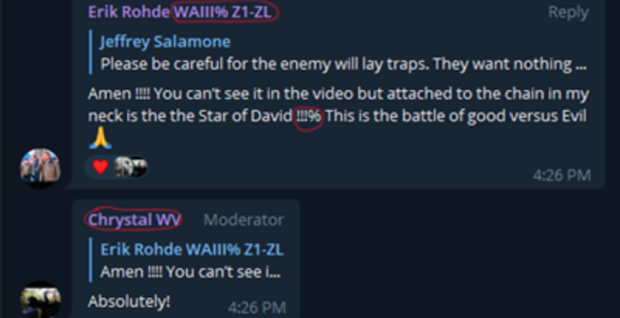 On February 23, the People’s Convoy official Telegram account asked channel members who wished to support the convoy to donate to the Government Resistance Impedes Tyranny (G.R.I.T) protest that will reportedly take place at the Washington State Capitol in Olympia on March 5. G.R.I.T. is being organized by Rohde and Matt Marshall, the Founder and President of the Washington Three Percent. The post uses Three Percenter imagery and appears to offer Three Percenter “merch” to those who contribute. 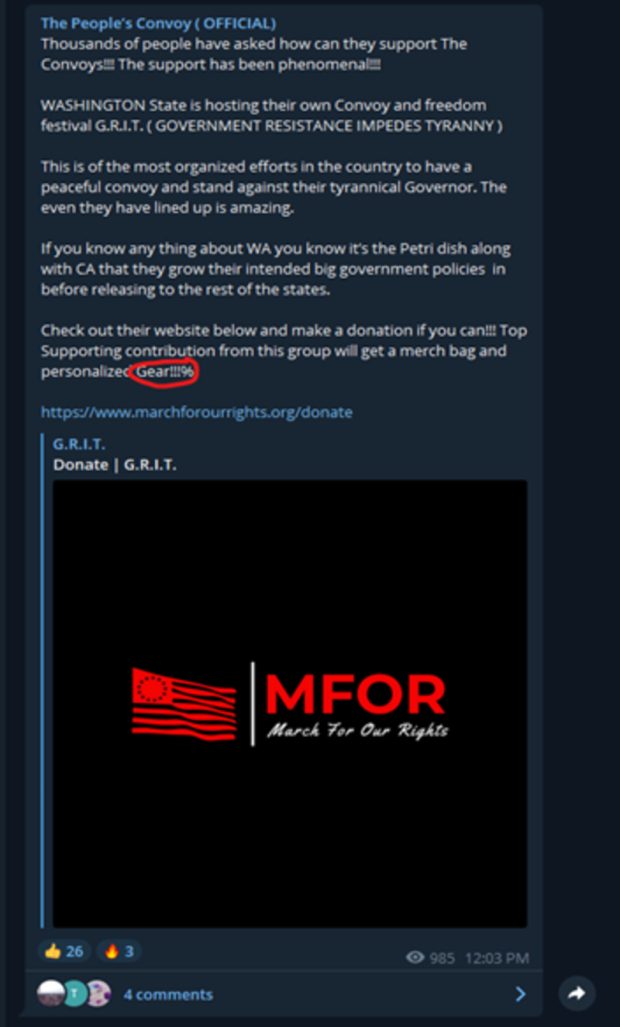 The People’s Convoy appears to have strong ties to the QAnon movement, particularly through organizer Leigh Dundas of California, who is a conspiracy theorist, QAnon influencer, and anti-vaccine legal activist. On February 16, People’s Convoy organizer Maureen Steele, who is reportedly Dundas' paralegal, announced on Bannon’s WarRoom that the protest was “working with” the attorney. Dundas later appeared on conspiracy theorist Stew Peters’ talk show to promote the convoy, where she was introduced as an organizer. On February 23, Dundas delivered the opening remarks to protesters as they gathered at the Adelanto Stadium.

Dundas has a long-established history of associating with extremists and extremist movements, including the January 6th insurrection, QAnon, and the militia movement. Notably, at a “Stop the Steal” rally held outside of the Supreme Court the day before the January 6th insurrection, Dundas gave a speech to the crowd in which she suggested that protestors should “take [‘traitors’] out back and shoot or hang them.” She was photographed at a door of the Capitol building during the insurrection, but has not faced charges.

The America Project, identified as part of a “broad consortium” of People’s Convoy supporters in the press release, is led by former Overstock.com CEO turned election fraud and QAnon conspiracy theorist, Patrick Byrne. However, on February 23, Byrne indicated via Telegram that he would be rescinding his support, believing that People’s Convoy has been “thoroughly penetrated by the Left, people who are licking their chops about the possibility of creating another J6 but this one with trucks.” 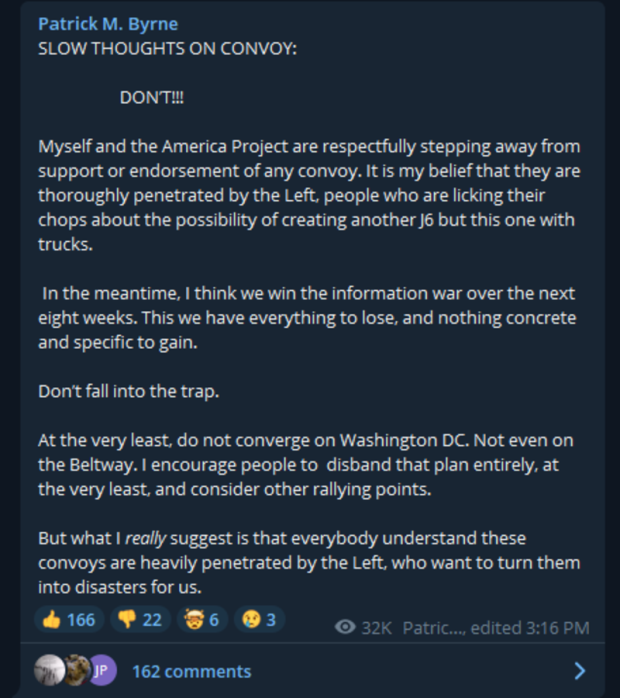 There have been other references to QAnon associated with the People’s Convoy, and many QAnon proponents have expressed support for the greater American trucker protest movement. After her remarks, Leigh Dundas was interviewed by QAnon influencer Ann Vandersteel, and the two excitedly embraced one another. Vandersteel previously stated via Telegram that she would be “embedded” within the protest.

The Proud Boys official Telegram channel, in addition to several chapter channels, have produced and shared posts indicating that while the Proud Boys are not organizing or participating in events related to the convoy protest movement, the group supports the convoy’s goals, and Proud Boys Telegram channels frequently share news stories about the Canadian and American convoys. Furthermore, an administrator for the Telegram channel organizing support for a convoy is reportedly a member of the Maryland D.C. Proud Boys chapter.

Of note, Randy Ireland, President of the Hell Gate Bridge (NY) chapter of the Proud Boys, has raised funds on the online crowdfunding platform GiveSendGo for two separate campaigns related to American convoys. According to the ADL Center on Extremism, Ireland has Raised $107,157.17 over 16 campaigns on GiveSendGo since August 18, 2021; his two most recent fundraising campaigns were for "Americans For Freedom Convoy" and "Truckers For Freedom USA." Ireland’s fundraising as an influential member of the Proud Boys reflects the group's support of the convoy's objectives.

In the wake of insurrection-related arrests of high-profile group members, the Proud Boys have been more cautious about participation in large-scale events that could draw scrutiny from law enforcement. It is possible that individual members may participate in the convoy itself or in related protest events in and outside of Washington, D.C. 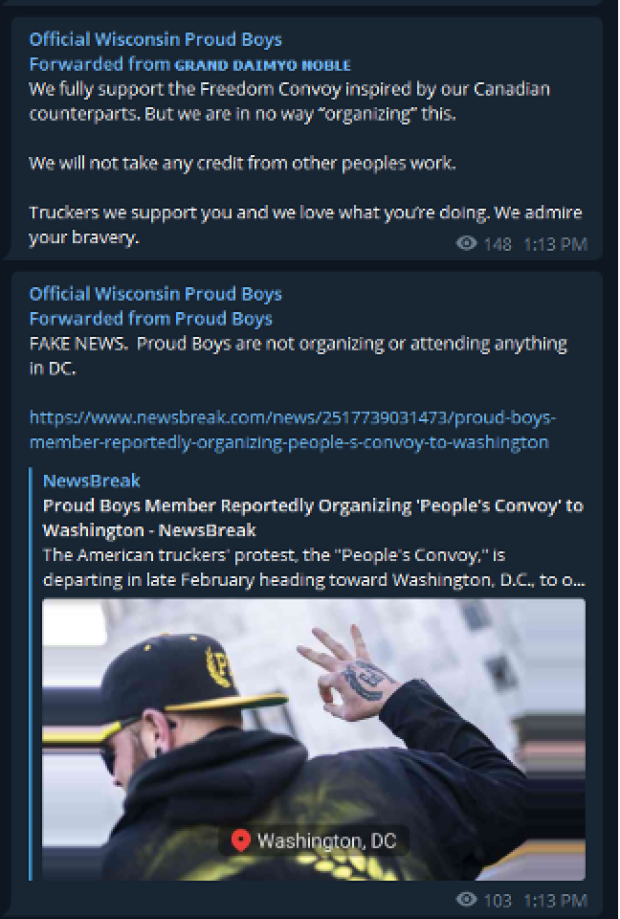 There are also a few individuals purporting to be Proud Boys in People’s Convoy-related Telegram chats. At least one individual who referred to himself as a Proud Boy suggested that he would be happy to help with local organizing, but this individual did not appear to be a key organizer of any related events.

ADL researchers will continue to monitor the People’s Convoy and related events.