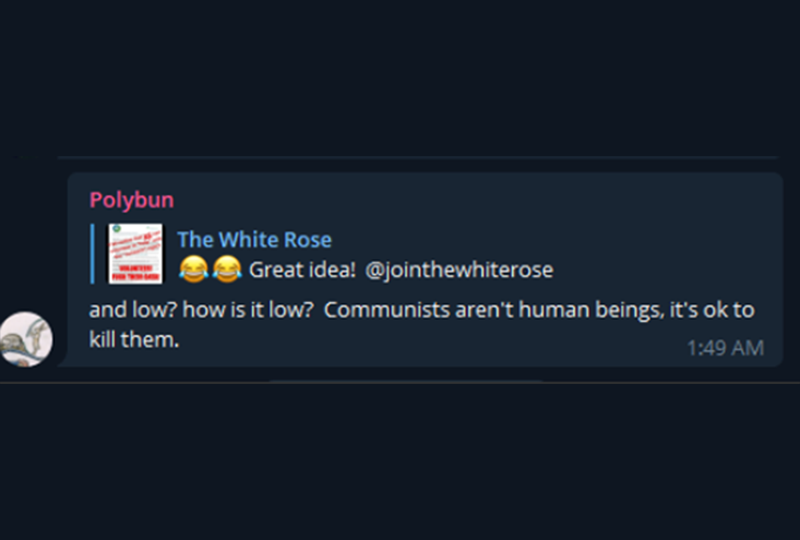 On Saturday, February 19, 2022, 43-year-old Benjamin Jeffrey Smith allegedly fired into a crowd of racial justice protestors, killing one woman and injuring five other people. Smith reportedly initially yelled at the group of protesters who were gathering on his block in Portland, Oregon, to protest the recent police killing of Amir Locke, a Black man who was shot while Minneapolis police were serving a no-knock warrant. Smith, who police have named as the primary suspect, was also injured in the shooting, and remains hospitalized.

A history of comments advocating for violence in response to vaccine mandates, against “communists,” antisemitic posts about conspiracies of Jewish control, misogynistic posts calling women unintelligent and therefore likely to support “communists,” and a building disgust for the city of Portland as a "cucked area of the nation" may have influenced Smith’s alleged role in the shooting. 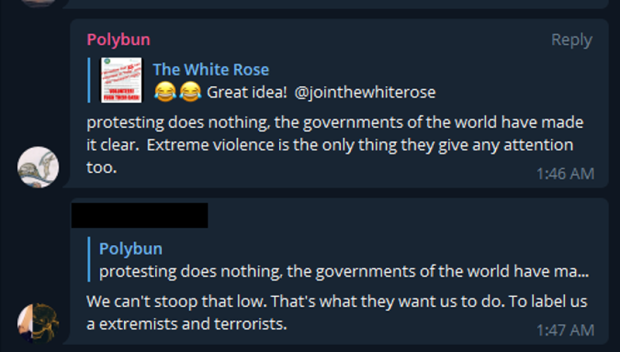 According to Oregon Live, Smith's roommate told reporters that he used the Reddit username "Polybun." Based on reporting, post history, username, and location, ADL Center on Extremism researchers have reason to believe that Smith also used this same username on Telegram. "Polybun” has a history of posts encouraging violence against "communists" and other perceived leftists.

His propensity for advocating violence was most apparent in his comments in The White Rose Telegram chat in July 2021. The White Rose is a loosely organized collection of international anti-vaccine, anti-mask, anti-lockdown and COVID-19 skeptic adherents that disseminate their messages via stickering and other propaganda. COVID-19 mandates may have been a tipping point for Smith, whose roommate suggested that he became especially angry during the pandemic.

Polybun received several warnings in The White Rose Telegram chat for arguing that stickering was "useless” and advocating violence instead. Smith, allegedly posting under his alias Polybun, wrote, "Communists aren't human beings, it's okay to kill them" and "...Violence is the answer. If you think for a single moment the government isn't willing to commit acts of violence against you to enforce this insane shit, you're dead wrong. That's not ego, that's fact. Stop being stupid."

Smith has also allegedly made antisemitic, racist and misogynistic comments on Telegram. On October 18, 2021, Polybun posted in a now banned Telegram chat, "Did someone say cremate? Are we burning Jews today?" In addition, on September 9, 2021, he posted to a private Telegram channel "christianity [sic] is a jewish invention designed to control gentiles." Smith allegedly also used the n-word in Telegram chats and his targeting of a racial justice protest suggests that racism may have been a motivating factor for his actions. On women, he posted to a now-banned Telegram channel that "women usually have the mind of a child...This the reason [sic] most women vote for communists."

The woman Smith allegedly murdered, June Knightly, was acting in support of what Smith would likely have perceived to be a "communist" cause. This is also consistent with what Oregon Public Broadcasting (OPB) has reported in interviews with Smith’s roommate, Kristine Christenson, who said that as Smith became more radicalized, she heard him yelling racial slurs and making derogatory remarks against women in his room.

Smith was allegedly a member of the "furry" community, which according to Wikipedia is "a subculture interested in anthropomorphic animal characters with human personalities and characteristics." Individuals who identify as "furries" may participate in conventions where they dress in animal-based costumes, and there is a controversial sexual aspect to the subculture. Other members of the "furry" community have denounced Smith's actions.

In the private chat for "furries," screenshots from September 2021 were shared to Twitter by an activist warning about Smith's alleged comments as Polybun in the group. The activist posted these back in September shortly after the posts were made and they have been shared widely across Twitter in the aftermath of the shooting. One such screenshot showed Polybun posting, "If proud boys [sic] shot up somebodies [sic] car they probably deserved it thus far they sadly haven't shot up someones [sic] car, because good christ that needs to happen."

Smith was also active on Reddit (though not much in the past year), where notably, he posted a comment on an article about a man being attacked after confronting others for not wearing masks, writing that the man: "Got what he fucking deserved."

Another member of the "furry" community took to Twitter to show that Smith has had a history of violence. This individual alleged that ten years ago they threw Smith out of a party after he brandished a knife when someone tried to take his photo.

This case highlights a disturbing convergence of anti-vaccine advocacy, antisemitism, racism, misogyny and anti-leftist sentiment, and underscore the extent to which conspiratorial views can lead to real-world action.

Although Smith does not appear to be a member of an extremist group, based on his online post history, he appears to have been influenced by bigoted and conspiratorial rhetoric around left-wing actors, Jewish and Black people and women.

Anger around COVID-19 mandates seemed to have amplified his animosities, and when a racial justice protest came to his neighborhood, Smith allegedly acted on the beliefs he shared in online messages: that “it’s okay to kill” perceived "communists” because they “aren’t human beings.”