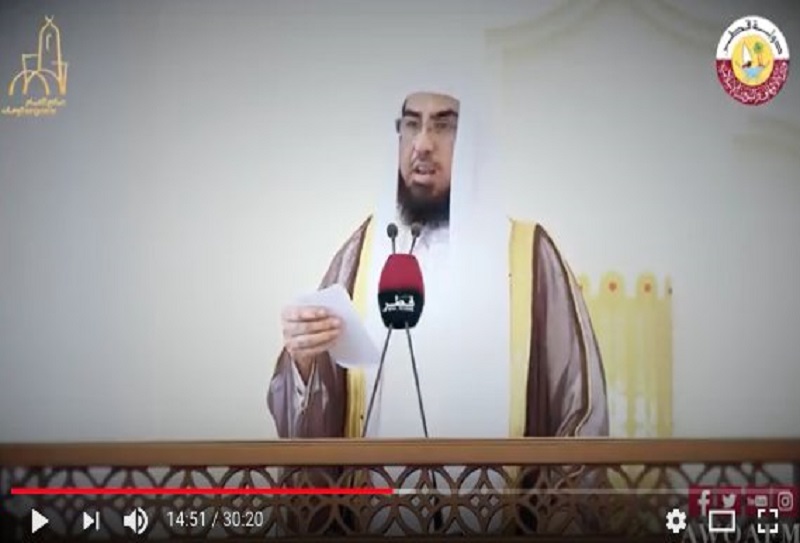 In preparation for the Qatari Emir’s visit today to Washington, the White House announced last week that President Trump thanked the monarch by phone for his country’s “continuing commitment” to countering extremism.

However, in the last year Qatar’s government has actually continued to use its prominent platforms to promote strident anti-Semitic preachers, a practice President Trump and Congressional leaders should raise with the Qatari Emir Tamim bin Hamad Al Thani during his visit.

Most notably, Qatar’s state-controlled Grand Mosque featured a Friday sermon in December 2017 by preacher Muhammed al-Muraikhi in which he sought to tell the world’s Muslims that Jews have “enmity and hatred to you in their blood and their veins”. He described the Jewish people as “your deceitful, lying, treacherous, fornicating, intransigent enemy” who “has despoiled, corrupted, ruined, and killed, and will not stop.”

Muraikhi’s sermon dismissed the Jewish religious connection to Jerusalem and the Holy Land as an “invalid, falsified historical claim.” He further charged that the Jews “betrayed God,” tried to kill Jesus and Muhammad, murdered other prophets, and broke important covenants and charters.

In this regard, Muraikhi commended the Palestinian people for opposing the Jews, “despite all that the Zionists do and all that Satan helps them with support and assistance and providing weapons and everything they ask for.”  It was not clear whether he was referring to Israel’s main backer, the U.S., as Satan in this regard.

Far from countering extremism, Muraikhi’s sermon encouraged it. He declared that the Israeli-Palestinian conflict “cannot be solved with promises or conferences or turning east or west” because he said Jews would never be satisfied with concessions from Muslims or with “so-called coexistence.” Instead, he called upon all Muslims to “cleanse” al-Aqsa from “the filth” of the Jews.

As ADL documented last year, this kind of hateful language about “cleans[ing]” al-Aqsa from supposed Jewish desecration was also a common message among U.S.-designated terrorist groups such as Hamas as well as by a broad swathe of extremists on social media.

According to the State Department, Qatar’s government provides preachers with guidance for Friday sermons, reviews content, and reserves the right to take judicial action against clerics who fail to adhere to such guidelines. Yet far from punishing or at least disavowing Muraikhi’s anti-Semitic rhetoric, Qatar’s government promoted his sermon both before and afterward, and broadcast it on official media.

Qatar’s government did the same when a preacher named Abdullah al-Naama delivered an extremist sermon at the Grand Mosque on July 21st, 2017.  In fact, Naama and Muraikhi have been the only preachers selected to deliver weekly Friday sermons at the Grand Mosque since that date. And Qatar should already have known such incitement was a distinct possibility, since both men have engaged in it before.

In Naama’s July 21st sermon, he warned Muslims that their “most dangerous enemies” are Muslim hypocrites, who he says are even “more dangerous to Islam than the Jews and the Christians.” Naama declared that Muslim hypocrites resort “to the Jews and the polytheists as a refuge” and that they “are among the ranks of the adversary, for where are they during [literally “from”] the defiling of the Holy Sanctuary?”, accusing Israel of desecrating the Temple Mount.

Naama went on about such Muslim hypocrites, imploring “where are they during the siege of Gaza?  Where are they during the Holocausts of Muslims in several places?” He argues that “the great betrayal” by Muslim hypocrites is over Palestine, apparently suggesting that treating Israel with anything but overt hostility is a betrayal of Islam.  Naama, who has previously praised what he called Gaza’s “mujahideen,” concluded his sermon by beseeching all Muslims to accept it as their “great duty... to aid our brothers there, with one’s self, and money, and prayer, and extending the hand of support and aid with all of one’s strength and means.”

Qatar has also continued to host extremist preachers at the mosque that services the learning institutions on Qatar’s Education City campus, including satellite campuses for Cornell, Texas A&M, Virginia Commonwealth, Carnegie Mellon, Northwestern, and Georgetown Universities. In 2015 and 2016, several guest preachers propagated egregious incitement against non-Muslims during their sermons at the Education City Mosque.  And in June 2017, the Education City Mosque hosted a series of lectures by Mohammed Rateb al-Nabulsi, a preacher who has previously labeled all Jews as combatants and who advocates executing gay men.

Since then, the mosque has also hosted four Friday sermons by another problematic preacher named Shaqer al-Shahwani, including this past month.  The fliers to promote these sermons carry the logos of both the quasigovernmental Qatar Foundation and the Qatari government’s Ministry of Endowments and Islamic Affairs.  Not only has Shahwani previously incited against the Jewish people, he has also been sanctioned by Saudi Arabia, Egypt, the United Arab Emirates, and Bahrain on charges of engaging in a fundraising campaign for al-Qaeda.

Qatar has made pledges in response to outside pressure regarding extremist preachers at its state-controlled mosques before.

In both 2013 and 2015, a Saudi guest preacher named Saad al-Ateeq called upon Allah during sermons at Qatar’s Grand Mosque to “destroy the Jews” and “destroy the Christians.” Under repeated questioning, Qatar’s then-foreign minister declared that Ateeq was “not allowed” on state television anymore, which had broadcast his hateful sermon. Yet just last April Qatar’s state TV network hosted Ateeq again for an hour-long program and granted him the honorific of “His Eminence the Sheikh.”

Qatar’s continued state backing for anti-Semitic hate preachers is directly at odds with President Trump’s call for Doha to actively combat extremism, and hopefully President Trump is explicitly raising it with the Qatari ruler at their meeting. Indeed, recent developments suggest that the U.S. should monitor such incitement more closely, raise concerns at all levels, and track whether or not Doha fails yet again to follow through.