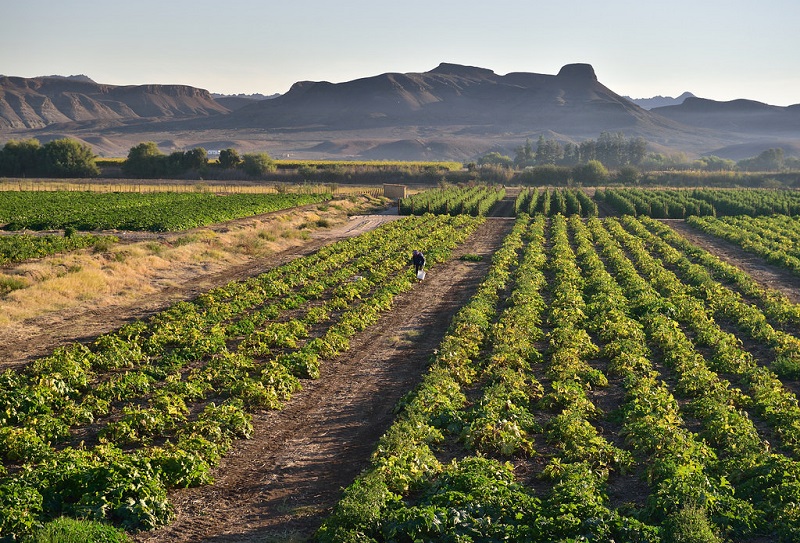 White supremacists across the U. S. reacted with exuberance after a recent tweet by President Donald Trump claiming he had asked the State Department to “closely study” farm expropriations and “the large scale killing of farmers” in South Africa.

By paraphrasing Fox News host Tucker Carlson, whose remarks on the subject apparently inspired the tweet, the President made it clear that he was referring to white South African farmers. 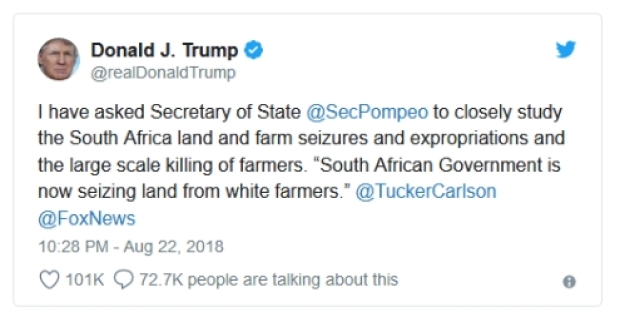 Andrew Anglin, the operator of the notoriously racist and anti-Semitic website Daily Stormer, was one of the first to promote Trump’s statement. Lamenting that the “crisis” was not covered by the mainstream media, Anglin claimed on his site that the presidential tweet was a sign of change: “You see there is this gigantic man. His name is Donald Trump, and he is the President of the United States of America.”

Patrick Casey, leader of Identity Evropa, one of the most active alt right groups, excitedly tweeted that conservatives would now become aware “of the plight of White South Africans” and that it would move them from “acceptable” debate over immigration towards identitarianism (a white supremacist philosophy).

Popular alt right commentator Nicholas Fuentes tweeted that “White identity is entering the mainstream and there’s literally nothing you can do about it.”

Here are the facts: Some white farmers are actually killed each year in South Africa—as are many black farmers and many other South Africans, largely because South Africa is a country with generally high rates of violent crime.  According to Africa Check, in 2016-17, 74 murders occurred during farm attacks—compared to 19,000 murders in the whole country. AgriSA, an association of agricultural unions in South Africa, has stated that the rate of farm murders is far lower in South Africa today than it was 20 years ago.

This is a far cry from the white supremacist claims of mass murder and ongoing “white genocide.”  Those allegations are rooted in a long history: For decades, white supremacists globally were cheerleaders for the institutionalized white supremacy of apartheid in South Africa. They have reacted bitterly to the end of the racist policy, and to the progress South Africans have made in pursuit of racial equality and reconciliation.

White supremacists have seized upon some of the farm-related violence in South Africa since the end of apartheid to peddle a propaganda campaign that exaggerates and distorts the situation to imply that South African whites are imperiled. They also insist that unless action is taken, whites in Europe and the United States will face the same sort of “genocide” at the hands of non-whites and immigrants.

White supremacists have been pushing this propaganda campaign particularly vigorously over the past six years or so.  In February 2012, white supremacists organized protests at several state capitols as part of the “South Africa Project (SAP).” The goal of the organizers, which included representatives from virtually every segment of the white supremacist movement, was to promote the alleged “genocide of Whites” in South Africa.

Since then, white supremacist references to “genocide” in South Africa have been common. In July, someone writing under the name “Marcus Cicero” on the white supremacist website Occidental Dissent proclaimed that “the Boer slaughter” was coordinated and sanctioned “from the very highest levels of government.”

Alt right figurehead Richard Spencer focused on the plight of the “Boers” in South Africa in his March 2018 speech at Michigan State University, suggesting the United States might see something similar.  Canadian alt right personality Lauren Southern even released a “documentary” this year titled “Farmlands,” that promoted the notion of “genocide against the white population ready to erupt in an all-out race war.”

More recently, Jason Kessler claimed that a South African speaker would be at the Unite the Right 2 rally in Washington, D.C. to talk about “human rights abuse” in that country. Kessler did not identify the speaker but was most likely referencing Simon Roche, the spokesperson for the Suidlanders, a far-right South African survivalist group which stresses the need to prepare for an impending racial civil war. Typically warning that “white genocide” is imminent in South Africa, Roche shares his views at white supremacist events in the United States, including the April 2018 annual American Renaissance conference.

Also in April, more than a dozen Identity Evropa members held a protest in front of the South African embassy in Washington, D.C., hanging a sign on the statue of Nelson Mandela that read, “Kill the farmers. Kill the Boer,” suggesting black South Africans wanted to kill white South Africans. The protesters then posed as casualties at the base of the statue.  Several hours later the group returned and placed 50 crosses adorned with South African flags on the lawn across the street from the embassy.