Richard Spencer Is Making Common Cause with Neo-Nazis

Richard Spencer, the white supremacist most closely associated with the alt right, appears to be making common cause with neo-Nazis, something that did not seem likely even a few years ago. Before becoming a white nationalist, Spencer worked for the mainstream American Conservative magazine and carefully cultivated his image as a “suit and tie” racist who did not use blatantly racist language or sport racist tattoos. However, over the last month, Spencer has become more publicly associated with neo-Nazis. 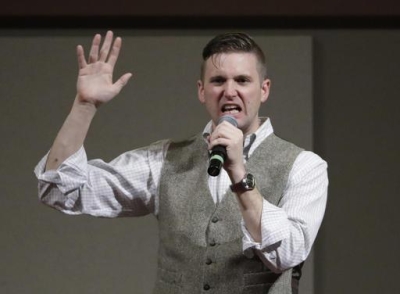 Most recently, on December 14, Spencer appeared on a podcast on The Right Stuff (TRS), a virulently anti-Semitic site, with neo-Nazi Andrew Anglin of The Daily Stormer and Mike Enoch, the pseudonym of the person who founded TRS.  On the show, the three spoke amicably about their different approaches to white nationalism. Indeed, they appeared to salute each other’s efforts to gain traction with mainstream whites who have not embraced white nationalism. 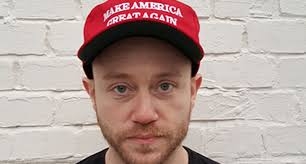 On The Daily Stormer, Anglin wrote about the podcast as an “historic” meeting between three representatives of the alt right. He asserted, “We are ready to move forward, as a single unit, as this is what the times have called for. The three of us care not for our own egos or lives. We care only about the agenda, which is: We must secure the existence of our people and a future for white children.”

The last sentence is known as the “14 words,” a rallying cry of white supremacists. Previously, Spencer had stayed away from what others on the alt right call the “1488ers,” people who promote the 14 words and Nazi symbols and ideology. (88 stands for the eighth letter of the alphabet, thus 88 = HH or “Heil Hitler.”)

A day after the podcast, Spencer’s mother Sherry went public with complaints that she was being harassed to sell her property in Whitefish, Montana, the town where she lives and Richard Spencer lives part-time.  Until recently, the address of the National Policy Institute (NPI), the white supremacist organization that Spencer runs, was also listed in Whitefish.

In response to an article about Spencer’s mother being harassed, Anglin spearheaded a campaign against Jews in Whitefish, whom he blamed for her troubles. In a column on The Daily Stormer, Anglin called Jews “a vicious, evil race of hate-filled psychopaths” and published addresses, phone numbers and other information about Jews in Whitefish and encouraged his supporters to contact them. They have since received  death threats.

Spencer has not disavowed Anglin’s call to action. In tweets, he has said that he condemns violence but not free expression, thus tacitly approving the campaign against the Jews in Whitefish. This is not the first time that Spencer has made common cause with neo-Nazis.

On December 6, Spencer gave a speech at an event at Texas A&M University, where he was invited to speak by neo-Nazi Preston Wiginton and was guarded by a group that included neo-Nazis.

Just a few weeks earlier, at an NPI conference, Spencer alluded to the term Lugenpresse to describe the mainstream media. This was a term the Nazis used to describe what they called the “lying press.”  Spencer then went on to shout “Hail victory,” the English translation of Sieg Heil.” Some in the audience responded with Nazi salutes. Afterwards, Spencer refused to condemn the Nazi salutes, claiming  that he and the audience members were being “ironic” and “cheeky.”

Spencer is not a neo-Nazi even though he might share some common ideas with neo-Nazis, such as the desire to preserve white identity and the push for a white ethno-state. Spencer also had not openly embraced anti-Semitism, the main tenet of neo-Nazis. He had Jewish friends and a Jewish mentor. More recently, however, Spencer has crossed the line into promoting anti-Semitism.

In 2015, Spencer wrote an article in Radix Journal, a white supremacist publication he runs, which recommended the work of Kevin MacDonald, an anti-Semite and retired professor. Spencer also invited MacDonald to speak at the annual NPI conference for the last two years. In addition, he invited TV personality and anti-Semite Tila Tequila to this year’s conference.  It is clear that Spencer is now willing to visibly align with blatant anti-Semites and neo-Nazis.