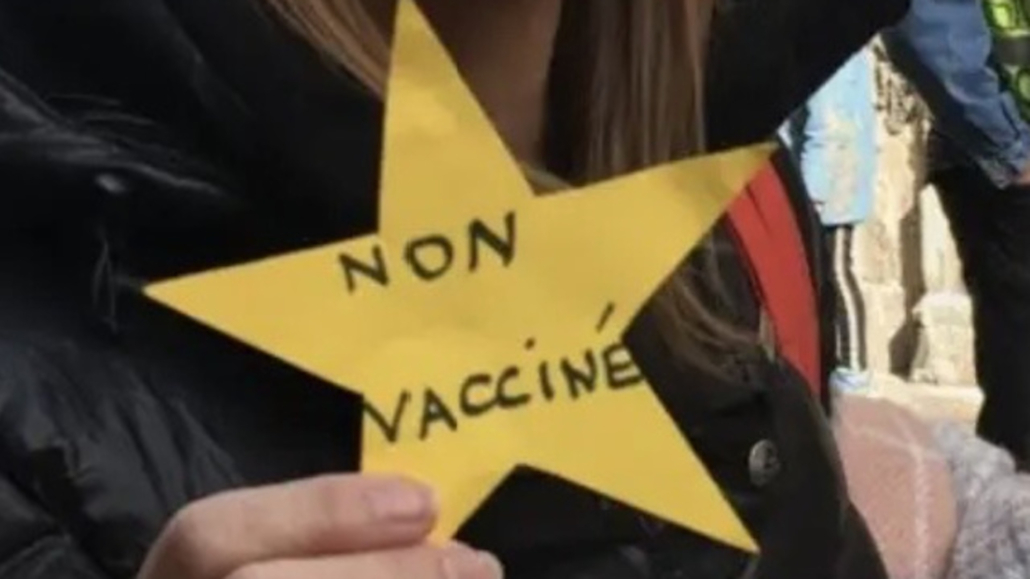 Across Europe, protests against COVID-19 restrictions and public campaigns promoting vaccines against the virus have included Holocaust symbols and imagery, such as the yellow star.

The utilization of this type of Holocaust imagery wrongly compares the antisemitic, racist, misogynist, xenophobic and homophobic Nazi-regime and its genocidal acts to current government measures to contain the pandemic. Comparing the two is not only an act of moral outrage, but also represents an attempt to downplay the enormity of the Holocaust.

At an anti-vaccination rally in London on April 25, protesters marching “for freedom” were photographed wearing yellow stars including the outlines of the Jewish symbol for the Star of David pinned to their lapels or from lanyards. The yellow star is a well-known symbol which Jews in Nazi-Germany were required to wear visibly on the outside of their clothing to be identifiable as Jews in the aftermath of the Pogrom Night on November 9th, 1938. Jews who refused to comply were subject to being shot on the spot. The same group of protesters were also carrying posters with slogans such as “Covid 19 vaccine holocaust.” As Karen Pollock, Chief Executive of the UK Holocaust Educational Trust commented: "The ignorance of the history these people are invoking is deeply painful, at worst it is provocatively and purposefully antisemitic.”

In France, some of the 45 protestors objecting to anti-Covid measures were seen in historic city of Avignon carrying banners showing yellow stars and wearing yellow stars marked with the words “Not Vaccinated.” The protestors also compared a proposed EU passport reserved for those who have been vaccinated against Covid-19 to Nazi antisemitism. One of the organizers even doubled down on the analogy by pointing out: “The Germans started by banning kindergartens and cinemas to Jews.” During an interview, one of the protestors conceded that the use of Holocaust symbols is “maybe a bit strong.” A parliamentarian for the region, Eric Ciotti, condemned the protestors as “brainless” and “outrageous.”

An image posted on French-speaking far-right forums on Reddit, followed by hundreds of shares on Facebook, compares Jews being forced to get on deportation trains towards the inhumane gas chambers with people standing in line for the Covid-19 vaccine. The image reads: “They thought it was just a little shower. They thought it was only a small injection.”

In addition, a French nurse tweeted that she refuses to administer the Covid-19 vaccine in order not to "commit a medical experiment" that would violate the "Nuremberg Laws." These antisemitic and racist laws, enacted in Nazi Germany in 1935, outlawed Reich citizenship for Jews and prohibited marriages between Germans and (German) Jews. Since January 11, the tweet has garnered close to 5,000 likes and over 2,400 shares and to date it remains online.

In the Netherlands, the Forum For Democracy party (FVD) links the German occupation during World War II with the cabinet's Covid-19 policy in a poster. Anti-hate NGO CIDI writes : “The inappropriate action of FVD, which trivializes and misuses the suffering of the victims of World War II for its own political gain, shows a worrying lack of historical awareness.” CIDI also reported that some Dutch people equated the government-directed curfew with measures during the Nazi occupation and with Anne Frank’s situation in the Secret Annex. Earlier in August 2020, at a protest against the Covid emergency law in The Hague, anti-vaccination activists pinned Stars of David with the text 'Unvaccinated' on their children.

In the Czech Republic, several protesters wore yellow Stars of David inscribed with "Unvaccinated" on them at an anti-Covid restrictions demonstration in Prague on January 8th. The Federation of Jewish Communities of the Czech Republic, as well as several elected officials, condemned “the textbook abuse and relativizing of a Holocaust symbol that is associated with the suffering of millions of people. It is evident that it is necessary to constantly educate our society and to recommend that all who resort to such base displays visit the locations associated with the Nazi genocide both at home and abroad.” Two days later, Czech MP Lubomír Volný (SPD), published a collage in which the message of the sign that hung over the Auschwitz concentration camp, "Arbeit macht frei" ("Work Will Set You Free"), was  changed to read "Vaccine macht Frei" or "The Vaccine Will Set You Free."

In Belgium, in May 2021, anti-vaccination protesters in Brussels marched with signs including the "yellow star" on striped background, which are supposed to represent concentration camp prisoner uniforms, with the inscription "non vaccine", French for “unvaccinated”.

In Germany, reports of Holocaust trivialization at demonstrations against anti-Covid measures have been numerous. Several protesters in cities across Germany have dressed up in striped prisoner uniforms and put on yellow stars reading: "unvaccinated."  From the color to the font, they were almost identical to the badges Jewish people were forced to wear during the Holocaust. Others in similar outfits held up signs reading: "Masks will set you free" or "Vaccination will set you free." The city of Munich reacted in May 2020 by banning the use of Nazi-era Stars of David at anti-Covid-19 protests. Germany's antisemitism commissioner, Felix Klein, also weighed in, saying that wearing the modified Jewish stars was a "calculated breaking of a taboo." A year later, in May 2021, he called on cities and municipalities to ban the wearing of a yellow star at demonstrations and to take actions against this with the possibilities of regulatory law.

At one demonstration in November 2020, a young woman drew a horrific parallel: "I feel like Sophie Scholl because I've been active in the resistance movement for months." Sophie Scholl and her brother Hans founded the “White Rose” group in 1942. Together with other members of the group they were arrested and executed after being caught distributing anti-Nazi leaflets.

The number of examples correlates with the findings of the antisemitism watchdog RIAS in Germany. RIAS reported that in 2020 almost every other antisemitic incident in Bavaria and almost one in five incidents in Berlin were related to the COVID-19 pandemic.

Anti-Covid measures and anti-vaccination demonstrations have become the hotbeds of Holocaust trivialization and antisemitic conspiracy theories and tropes across Europe. The examples above demonstrate the lack of understanding and empathy for the suffering and trauma of the Jewish people during and beyond the Holocaust. It also is a testament to the need for continued and intensified Holocaust education in Europe across all ages.