Shooting in Halle, Germany: What We Know 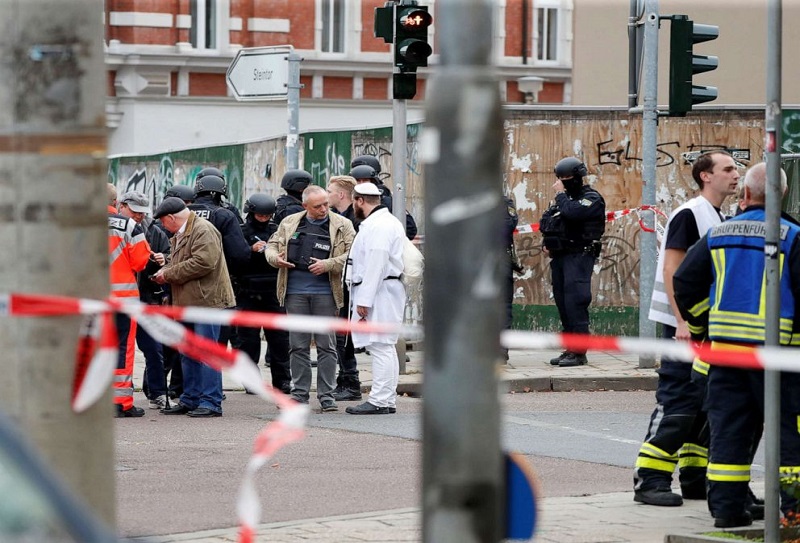 On Yom Kippur, the holiest day of Jewish calendar, the synagogue in Halle, Germany was attacked.  A terrorist with a shotgun tried unsuccessfully to enter the synagogue, where approximately 80 congregants were worshiping.  After his failed attempt at the synagogue, he began shooting at nearby individuals, killing two people and wounding two others, none of whom were affiliated with the synagogue.

According to news reports, Stephan Balliet, a 27-year-old German man from Eisleben, was taken into custody. German authorities confirmed the terror incident had an anti-Semitic motive and said that Balliet, a right-wing extremist, was both inspired by similar attacks and had hoped to inspire others to imitate him.

The suspect apparently streamed the attack through the game streaming platform, Twitch, which has since confirmed that it removed the link to the video soon after the attack. The video was then posted on several Telegram channels popular with white supremacists.

The video was uploaded to Telegram as “Joker.mp4,” likely referencing the newly released film Joker. A shorter excerpt of that original video has also been circulating. In the video, the suspect begins the livestream preparing for the attack, and before driving to the synagogue, he turns the camera to himself and states in English his apparent motive:

"Hi my name is Anon, and I think the holocaust never happened. Feminism is the cause of the decline of the West which acts as a scapegoat for mass immigration. And the root of all these problems is the jew. Would you like to be friends?"

The fact that the shooter spoke in English at certain points suggests he had hoped viewers around the globe would watch his stream.

The name “Anon” is a reference to the anon-username given to users in online forums like 4chan and 8chan, where previous mass shooters have posted manifestos and links to livestreams. Users on these forums and others often refer to each other as “anons.” The stated reasons for his actions—feminism, the decline of the West and the role of Jews in both—are common racist tropes and have been cited by other mass shooters.

Users on Telegram also posted a screenshot of what they claim is a post made by the shooter today on an online forum, perhaps 4chan. In the post, the author describes spending a year experimenting with various homemade weapons before settling on a “12 gauge slambangshotgun.” This is a simple gun design that’s common on the internet. The design of the slambang shotgun matches the one used by the shooter in Halle.

The video of the livestream appears to have spread rapidly online, and many right-wing extremists have shared the video, referring to the shooter as a “saint,” noting the Jewish holiday, and using anti-Semitic hate slurs.

This attack is reminiscent of the Christchurch and Poway shooters, who both livestreamed or attempted to livestream their attacks.

ADL's Center on Extremism is also aware of an apparent PDF manifesto circulating on the internet containing photographs of the shooter's weapons and ammunition, as well as additional commentary about his attack.  The 11-page document deals mostly in the logistics of building an arsenal and the plan for the attack itself.  Indeed, “The Plan” section includes discussion about security measures at the synagogue, which suggests the shooter had possibly surveilled the target prior to the attack. The stated objectives in the manifesto are to “Prove the viability of improvised weapons,” “Increase the moral of other suppressed Whites by spreading the combat footage” and “Kill as many anti-Whites as possible, jews preferred.”  The manifesto is also an extreme example of the gamification of mass murder common in extremist circles. The manifesto includes a gaming style list of “achievements.” Achievements are used in computer games to award specific feats, and the attacker’s list is clearly inspired by such games.

The mainstreaming of white supremacist ideologies in Europe and the U.S. is manifested in part in a rise in hate crimes and anti-Semitism, according to a recent ADL report.  As white supremacy grows, normalizes, and connects across borders, it has become imperative to better understand the networks and influencers so that appropriate measures can be developed to counteract this dangerous hate.