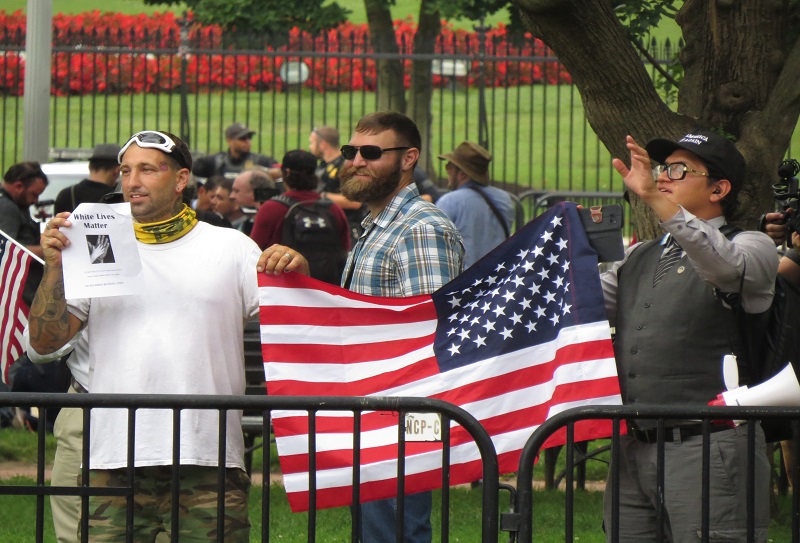 As he made his way towards D.C.’s Lafayette Park, rally organizer Jason Kessler was accompanied by about 30 right wing speakers and activists and a police escort. A massive police presence kept throngs of counter-protesters at a distance from Kessler and his group. There were no major incidents of violence, though some agitation was reported between police and counter-protesters.

Kessler, who has been roundly criticized by big-name white supremacists for his lack of intelligence and poor planning skills, among other things, sought to use the day as an opportunity to downplay his racist views. In press interviews and during his speech, Kessler referred to himself as a moderate, and insisted that he never identified as a white nationalist. “White people should have advocates, too,” he told a reporter. “Like the way other groups do. We are human beings who have legitimate concerns about their country.”

Someone else in the group held a hand drawn sign supporting anti-Semitic politician Patrick Little, and his apparent plans to run for President in 2020.  Two people identified themselves as being with the white supremacist Stormfront Action Radio, while a man and a woman were apparently there to promote “White Lives Matter New York.” Both displayed visible white supremacist tattoos.

The four speakers, including Kessler, got an early start. Kessler talked about the importance of “white civil rights,” and dismissed the idea of white privilege. “Right now they see the white man being on top. I’m a white man, and I’m not rich. I’ve had a hard time.” He pointed to the DeAndre Harris case as an example of the violation of white civil rights. (Harris, who is black, was beaten by white supremacists in a parking garage at Unite the Right in 2017. His attackers are facing a raft of charges). Kessler claims that Harris was the aggressor.

Charles Edward Lincoln, a disbarred attorney from Louisiana, claimed during his speech that the U.S. is less free today than it was in 1860, because the “Communist Manifesto has been implemented.” Later on Sunday, Lincoln posted a note to Facebook, writing, “I believe this is true,” with a meme that read: “White America your children will be slaves because you were afraid of being labeled a racist.”

The next speaker was Al Stankar, a blogger who refers to himself as an “itinerant YouTube preacher, novelist and bleeding heart r*cist.”  He believes white people are being scapegoated, and believes he can convince others of this fact through non-violent conversations.

Jovanni Valle (aka Jovi Val) wrapped things up. He identifies himself as a New York-based, Latino-American, pro Trump political activist and leader of “The Modern Patriots,” a “Pro-American movement…spreading awareness on #Ameriphobia and political violence across the U.S.”

“Trump will be president until 2024 because of those people out there,” Val said, pointing to counter-protesters. “But MAGA doesn’t die when Trump’s not president.”

Hundreds (and possibly thousands) of people, including a sizable Black Lives Matter contingent, had gathered at Lafayette Park to confront Kessler and his group. Police kept the two groups at a safe distance from one another, but the counter-protesters’ chants were audible throughout the speeches. Many carried signs decrying racism, fascism and the Trump administration.

Antifa were also on the scene; the black bloc activists milled around before the speeches and made a few attempts to engage or confront law enforcement.

By 5 pm, a half hour before the event was scheduled to begin, it was over, and Kessler and his crew were on their way back to the Metro station, where a special train car was waiting for them.

Meanwhile, in Charlottesville, hundreds took to the streets to remember Heather Heyer, the anti-racism activist who was murdered last year at Unite the Right. Police arrested four people on Sunday -- three counter-protesters and one right-wing demonstrator – on charges stemming from street protests.  All were released later that day.

While it may be tempting to interpret the poor showing at Unite the Right 2 as a sign that the alt right has been defeated, that’s simply not the case. In fact, while the alt-right is currently in a state of disarray, thanks to disagreements over leadership, tactics and optics, it has experienced tremendous growth over the last two years. New alt righters represent the largest single influx into the white supremacist movement since racist skinheads emerged in the United States in the 1980s. Its adherents are currently the most aggressive and energetic segment of the white supremacist movement.

Alt right groups Identity Evropa and Patriot Front continue to take action in the real world, fliering on and around college campuses and engaging in flash demonstrations. Daily Stormer Book Clubs, made up of localized crews of young white supremacists who support Anglin, are also active. Since the beginning of 2017, ADL’s Center on Extremism has tracked more than 900 white supremacist propaganda incidents, from distributions of white supremacist literature to display of white supremacist handbills and posters and more.

While the alt right is in disarray, these white supremacists are not down for the count. As Richard Spencer told reporter Jared Holt on Sunday, “I’ll be back. The alt right will be back. We just need to be patient.”

Dissension Reshapes and Divides the Alt-Right