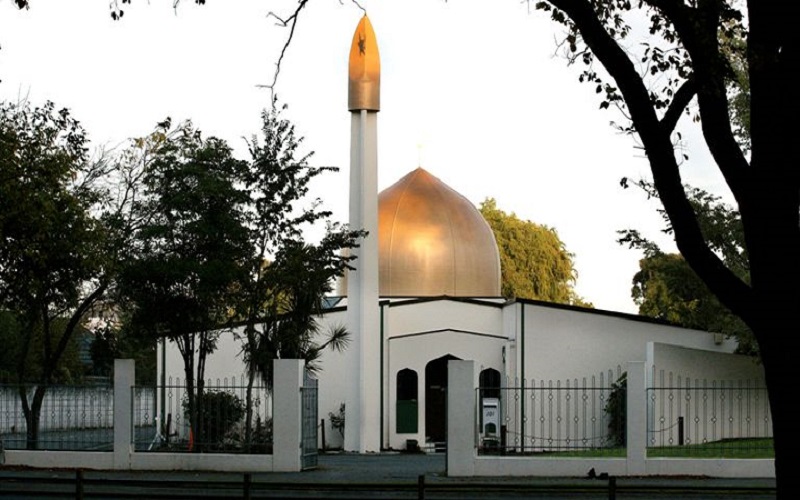 In the latest indication that violent white supremacists pose an international terrorist threat, an apparent white supremacist went on a shooting rampage at two mosques in central Christchurch, New Zealand on Friday, reportedly killing 50 people and wounding many others.

This latest white supremacist violence underscores the fact that white supremacy is a global threat whose ideology manifests around the world and results in acts of violence in many instances.

Tarrant apparently used social media to amplify his attack, streaming a live video of the shooting on Facebook, which was then posted on other platforms such as YouTube. He also appears to have posted a manifesto online just prior to the shooting.

In the past couple of years, we have seen extremists announce their intentions on social media shortly before they began their attacks. The most recent example is white supremacist Robert Bowers’ posts on Gab before he killed a number of Jews at a Pittsburgh synagogue in October 2018.

For modern violent extremists and terrorists, preparing social media seems to be as critical as preparing their guns. Tarrant’s attacks seem to be designed to leverage social media, to attract maximum attention to the massacre and his beliefs.

Tarrant also appears to have been influenced by other violent extremists, including white supremacist Dylann Roof, who killed nine black parishioners at a church in Charleston, South Carolina, and far-right extremist Anders Breivik, who killed 77 people in Norway in 2011. In fact, aspects of Tarrant’s manifesto, like detailing his plans, are reminiscent of Breivik, who also published a manifesto before his attack in Norway.

The manifesto and writings on the weapons used by Tarrant identify him as a white supremacist. His manifesto opens with an image used by other white supremacists and similar to one that previously appeared on a white supremacist website, Order 15, a group with an international presence which is focused on building a parallel, self-sufficient white society because they believe the societies of most western nations are “irreversibly broken.” The manifesto subtitle includes the words “Towards a new society,” also from the Order 15 website.

Tarrant apparently shares the belief common among white supremacists around the world that whites are experiencing a “genocide” due to changing demographics and increased migration of non-whites to majority-European countries. In the manifesto, he wrote “Radical, explosive action is the only desired, and required, response to an attempted genocide.”  He also wrote, “This crisis of mass immigration and sub-replacement fertility is an assault on the European people that, if not combated, will ultimately result in the complete racial and cultural replacement of the European people.”

Tarrant’s manifesto, entitled “The Great Replacement,” fixates on the possibility that white European society will be overrun by migration from Muslim and African nations, exacerbated by a low birthrate among white people. He probably drew on the thinking and language of French writer Renaud Camus, who coined the term “the Great Replacement” in 2010, though Tarrant does not refer to Camus directly in his manifesto. In his 2012 book, The Great Replacement, Camus writes, "The Great Replacement is very simple. You have one people, and in the space of a generation, you have a different people."  White supremacist fears of being replaced were most famously expressed in the 2017 chants in Charlottesville, VA, of “You will not replace us” and “Jews will not replace us.” Some white supremacists have added a conspiratorial gloss to their fear, alleging that global elites are purposely orchestrating the replacement of white Europeans, but there is no indication that Tarrant held this view.

There are other aspects of Tarrant’s manifesto that echo white supremacist beliefs.  For example, he advocates for ethno-states. Even though he qualifies his statements in the manifesto, his actions belie his words.  He claims he doesn’t hate Muslims but believes they should live separately; he claims he doesn't hate Jews, but adds: “A jew [sic] living in Israel [sic] is no enemy of mine, so long as they do not seek to subvert or harm my people.” Both of these statements are typical of many white supremacists who argue that they are not “haters” but just want other races or ethnic groups to live apart from white Europeans.

In addition, images from Tarrant’s apparent Twitter account show that his guns and gear were covered with white supremacist symbols.  These include a reference to the 14 words; a rallying cry for white supremacists: “We must secure the existence of our people and a future for white children; a “sonnenrad” or “sunwheel” patch, an ancient Indo-European symbol appropriated by Nazi Germany;  an Othala rune, part of several runic alphabet systems common in pre-Roman Europe, which were adopted by the Nazis; the Celtic cross, used by neo-Nazis, racist skinheads, Ku Klux Klan members and virtually every other type of white supremacist; the Tyr rune, an ancient runic symbol that was appropriated by the Nazis and subsequently became popular among white supremacists, and Archangel Michael’s cross, a fascist symbol which actually stands for prison bars, because the Romanian fascist Codreanu claimed that while he was in prison he was inspired by an icon depicting the Archangel Michael. 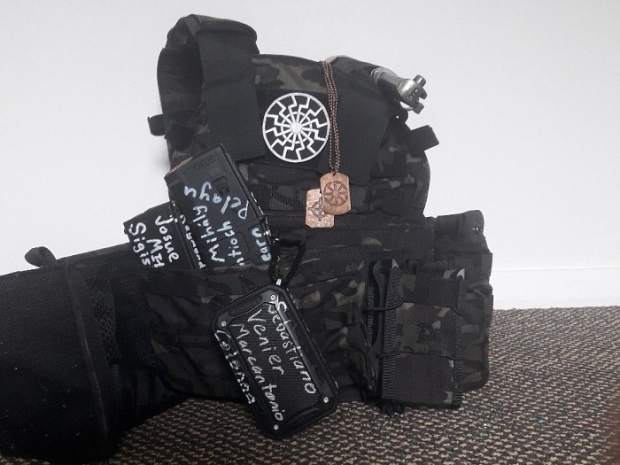 Tarrant also mentions President Donald Trump in his manifesto, dismissing him as a leader, but noting that he is “a symbol of renewed white identity and common purpose.” This is also a shared belief among white supremacists in the United States.

What appears to be Tarrant’s now-defunct Twitter profile was created in the last three days with his first tweet on March 12. Over the following two days he tweeted 64 times, the majority of which were simply tweeting links to external online articles and YouTube videos. Many of the articles he linked to were about non-white birthrates around the world, fertility issues with the white population, and non-white immigration in various places around the world. 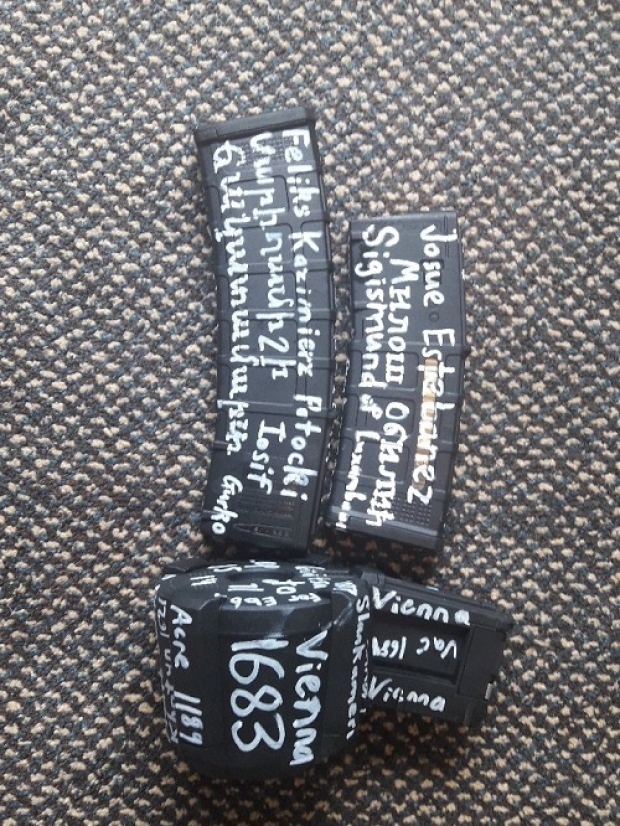 One of the links Tarrant made was for a piece on diversity found on the American white supremacist website National Vanguard. Most of the video links he tweeted were for videos related to white supremacy and non-white and Muslim populations in European and other countries. In connection with one video he linked to, titled “Russian angels of death,” showing what looks to be a helicopter attack in Syria, Tarrant tweeted “Coming soon to an immigrant suburb near you.” In another tweet, he linked to a video titled “George Washington Did Charlottesville” that was a mock commercial for the Dodge Challenger and was interspersed with video of white supremacist James Fields ramming his car into protestors in Charlottesville, Virginia.

What appears to be Tarrant’s Facebook profile linked to several population studies with a common theme: declining birthrates among predominantly white countries including those in Europe and North America, in contrast with high birthrates among Muslims and Africans, as well as repeated warnings from a variety of figures about increasing populations of Muslims and non-white people in Europe.

He also posted a video which demonstrated how to stab bankers and financial regulators.  He posted several videos containing quotes from Oswald Mosely, a British politician who promoted fascism and anti-Semitism in Europe during the 1930s.

He also posted a clip of Traditionalist Catholic Bishop Robert Sarah who bemoaned the possibility that “the West will die” because of low birth rates and because it is “invaded still by other cultures and other peoples, which will progressively dominate you by their numbers and completely change your culture, your convictions, your morality.” Bishop Sarah is an outspoken critic of Islam.

There is also an unconfirmed post on 8chan, an online forum popular with people connected to the white supremacist alt right, that some believe that Tarrant posted just prior to the shooting.  The post included a link to his manifesto and included terms popular with the alt right and the trolling culture associated with it, such as “shitposting” and “memes.” The post read in part:

“…if I don't survive the attack, goodbye, godbless and I will see you all in Valhalla!”