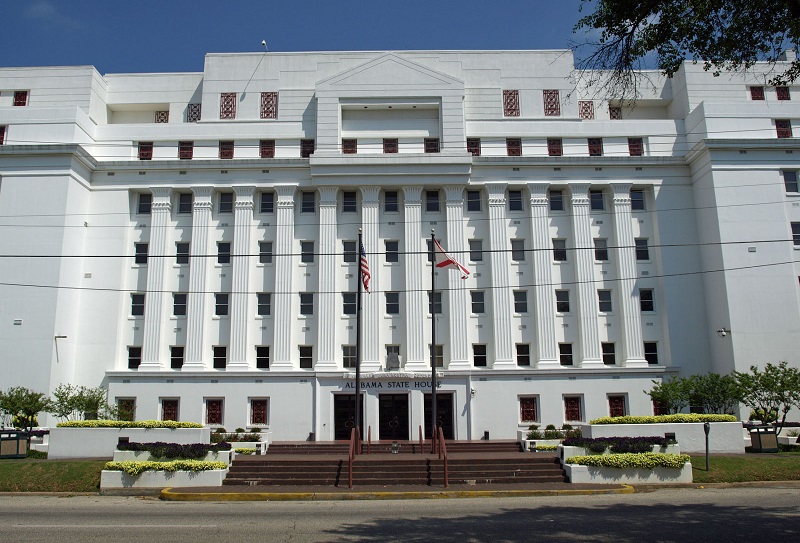 On May 15, Alabama governor Kay Ivey signed the country’s most restrictive abortion bill into law. The new law would effectively ban abortion at every stage and would charge doctors who perform an abortion with felonies, with possible sentences of 99 years in prison. White supremacists greeted the news out of Alabama with muted approval, reflecting their complicated feelings on the subject.

Historically, white supremacists have embraced the idea of white women being forced to have more babies but have opposed non-white women bearing more children.

Abortion is elemental to the “white genocide” conspiracy theory that defines modern white supremacist thought. They believe Jews are orchestrating an influx of non-white immigrants, who are taking over “white” societies, and feminists (also driven by Jews) are robbing white, male Americans of their rightful power, in part by encouraging white women to abort their fetuses.

Longtime white supremacist Tom Metzger expressed that Catch-22 in this May 15 Gab post:

Psychologist and white supremacist Kevin MacDonald would prefer to allow abortions in the case of rape and incest and sees some sociological “benefits” to abortion. On May 16 he tweeted: “Re Alabama abortion law, as an evolutionist I would not vote to prevent abortions involving rape or incest. Basically rewards the perpetrator and penalizes the victim. Abortion tends to involve lower-class women & has been linked to crime reduction.”

Bold-faced names aren’t the only white supremacists weighing in; user @WhitePillUS’s May 16 Gab post is emblematic of the broader conversation, and neatly encapsulates the white supremacist dilemma:

Meanwhile, others, like Gab user @StrawmanofAkkad’s, place the blame for abortions on Jews, “intersectional feminists and wine lady’s (sic).”

“I’m going to say something that’s going to drive the Zionists absolutely crazy. We would not have abortion in America if it was not for powerful, influential, rich Jews in America. I just said it. And I stand on it. Abortion is a Jewish value. Pro-life is a Christian value. I said it, and I mean it. Two religious worlds clashing. Abortion is a Jewish value. Pro-life is a Christian value. And the two religious worlds have clashed in this country since 1973. If you could block powerful, rich, deep-pocketed, influential Jews from financing the abortion industry, there would be no abortion in this country. That’s the truth. And so-called Christian leaders like Pat Robertson: You knew it all along and you would not oppose them, because you are in their hip pocket. And you would not come out against the powerful Jewish leaders in this country.”

The inherent misogyny of the white supremacist movement -- including the belief that white women are essentially property whose sole purpose is to create white babies -- is key to its members’ position on abortion.  A number of white supremacists argue that only “hoes” and “sluts” need to be upset about abortion bans. 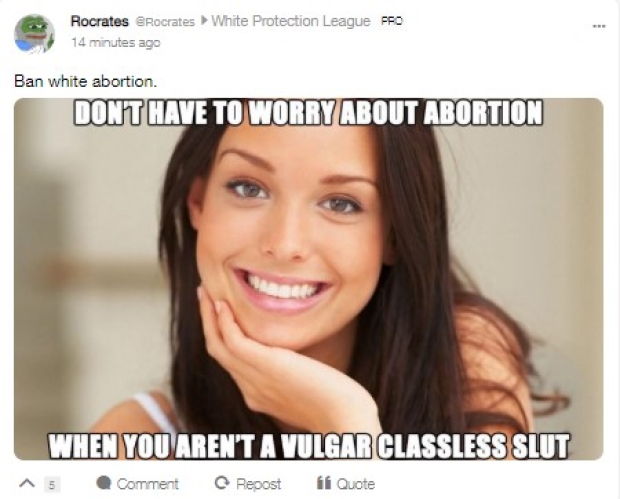 In mid-May, when the CDC released figures showing that the U.S. birth rates had fallen to record lows, “Roy Batty” wrote a piece at the white supremacist website Daily Stormer, where he is a frequent contributor, decrying the findings, blaming “the Jews” and, of course, women. “This is what happens when women are not educated about the one thing they should be educated about: the practical use of their vaginas.”

As some mainstream conservatives argued that the Alabama law went too far by banning abortion even in cases of rape and incest, a number of white supremacists contended that it didn’t go far enough, because it would not hold women criminally responsible for having an abortion. Among them: alt right figurehead Richard Spencer, who is the president of the National Policy Institute, a white supremacist think tank. Spencer tweeted on May 16: “I would take the Alabama abortion ban seriously, philosophically speaking, if it involved punishment for women seeking the abortion (it does not). Instead, it demonizes doctors, who could face life in prison for providing abortion services.”

Andrew Anglin, meanwhile, dismisses the abortion “debate” as a distraction from the issue at the heart of white supremacy: immigration. The Daily Stormer founder posted this to his website: “Abortion is sick and evil, and we absolutely should oppose it with everything we have. But we cannot let them use it against us. We must stand strong and focus on the real issue at hand, which is this invasion.” There will be ample time to “punish” women for their promiscuity, he adds. “These sluts will be forced to pay the piper for all of the piping they’ve gotten rammed up their goo holes – I can promise you that. A great reckoning is coming – and it is coming swiftly! The glorious vengeance we take upon these whores will shake the cosmos!”