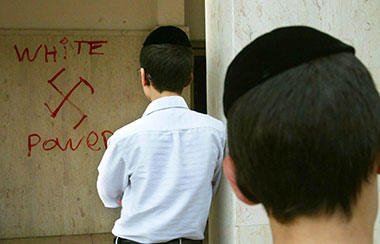 Anti-Semitism and The Merchant of Venice

One of the oldest forms of bigotry in existence, antisemitism has persisted on account of religious intolerance, cultural misunderstanding and centuries-old myths that have resulted in divisions among cultural and religious groups and, in the most extreme cases, the loss of lives, families and communities. From bigoted jokes and slurs uttered in school halls to physical assaults and the desecration of Jewish synagogues and cemeteries, antisemitism manifests in all forms and instills fear in any community.

There are two lessons included in this unit that provide students with a basic understanding of Judaism and the cultural, historical and religious aspects of the U.S. Jewish community (Lesson for Grades 3–6) and offer facts to refute antisemitic myths and stereotypes so that young people can effectively respond to anti-Semitic incidents in their schools and communities (Lesson for Grades 8–12).

This curricular unit also contains a number of resources for educators, students and families, including a myths and facts booklet on antisemitism, a list of book and video resources on antisemitism, recommended books on Jewish culture and faith, a handbook on the teaching of religion in public schools, a link to the ADL discussion guide, Anti-Semitism and The Merchant of Venice, and information on a new multimedia curriculum on the Holocaust that includes compelling video of first person testimony from Holocaust survivors, rescuers, and liberators.

In general, the study of antisemitism informs us of how all forms of bigotry operate. Prejudice of any kind can ultimately lead to hateful actions such as scapegoating, social exclusion, discrimination, and the genocide of a group of people. Understanding how antisemitism grows can help students recognize the importance of standing up to prejudice of any kind before it escalates.

Anti-Semitism and The Merchant of Venice