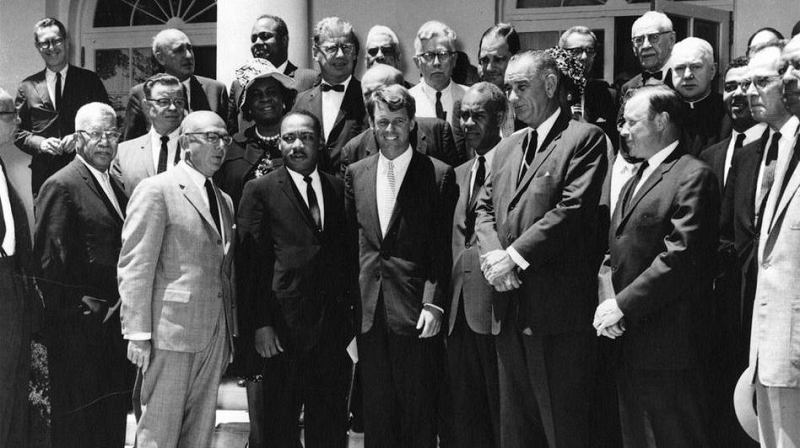 This weekend is the annual time of year when we reflect upon and remember Dr. Martin Luther King, and how his unflinching courage in the face of unrepentant racism proved that good is more powerful than evil. His moral leadership and political smarts ushered in a wave of legislation that enshrined the equality of all people under the law. His inner strength and outward calm created a high bar that activists still seek to meet.

It’s worth noting that the first few weeks of 2019 have sparked more anxiety than optimism across the country.

The halls of government literally are closed. Meanwhile, some members of Congress host Holocaust deniers on Capitol Hill, while another questions why the term “white supremacy” is offensive. A freshman congresswoman employs language long used to equate support of Israel with dual loyalties. Public personalities praise anti-Semitic books and authors without apology.

Populists are surging around the world, and leaders intentionally use intolerance to whip up their constituencies against vulnerable communities. Hate continues to go viral on the internet, and we wait to see when it will next move offline to inflict more violence on innocents.

In short, there seems to be real reason to worry about the state of our union.

In this particular moment, we would be well-served to remember Dr. King’s words. In his 1963 book “Strength to Love,” adopted from his sermons, he wrote:

It is almost as if he had peered into a crystal ball and saw this moment now, but his preferred response was dignified and humane rather than demeaning and hateful.

This doesn’t mean that we should eschew robust debate about issues. I think just the opposite. We should celebrate those who speak out. We should champion those who engage in fierce, fact-based arguments at any level of our democratic society, whether it’s the debate club in middle school or the student senate of a university or the floor of the state house.

But we need to do so in a manner that doesn’t demean people based on who they are. We can press our case rigorously through a political process without resorting to prejudice. This should not be hard, but it is critical. You see, our democratic society is not some edifice held in place by concrete and steel. In fact, it is an abstraction bound together by norms and strengthened by values. We need to preserve it by reinforcing these norms and values at every turn.

There have been some hopeful signs in the first few weeks of the year.

Last week we saw the GOP leadership in Congress discipline Iowa Rep. Steve King after his latest set of bigoted remarks. The party finally moved beyond rhetoric and stripped him of his committee assignments after his comments questioning why white nationalism and white supremacy are seen as offensive. I wish it happened when we first made this suggestion last year, but I applaud this important step.

In another example, numerous individuals and prominent organizations have broken with the national Woman’s March in recent weeks because key leaders failed to speak out consistently and clearly against anti-Semitism, let alone to condemn those who intentionally traffic in hate. We first noted this issue almost a year ago, but I am glad it is happening now. New national leaders are emerging, along with revised unity principles that expressly condemn anti-Semitism, good signs for the many who wish to march nationally. And many others still plan to participate in women’s marches taking place across the country, demonstrating that principles like dignity and equality are far more important than any one leader.

No one should doubt the importance of these examples. We know that young people imitate what they see and hear from figures of authority. Numerous academic studies prove this pattern — and many of us have seen it with our own children. Is it any wonder that some forms of harassment have almost doubled at K-12 schools?

As we gear up for another national election cycle, I hope candidates and incumbents, as well as social activists and voters, can take a deep breath and step back from the brink. Disagree vehemently on issues but do so without demeaning the other side. Resist the temptation to retweet that hateful meme or to spread bitter sarcasm on social media. Stick to the facts and endeavor to come back to what we have in common, rather than ending the discussion by noting what divides us.

In his time, Dr. King faced down threats from all sides. And yet he refused to respond in kind. He always seemed to engage his better angels in pursuit of a more just America. If we can pause to convert this lesson into our daily lives, it would be a Martin Luther King Day to remember.