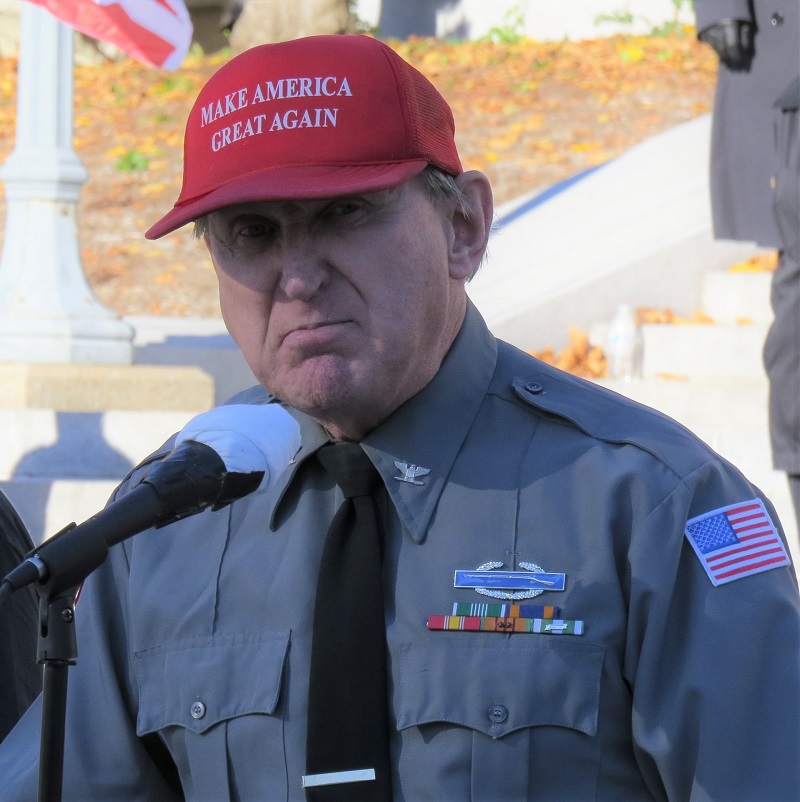 In February 2018, Arthur Jones emerged as the likely Republican nominee for U.S. Representative in Illinois' 3rd Congressional district. The vocal white supremacist and Holocaust denier is running unopposed for the Republican nomination, and will face incumbent Representative Dan Lipinski or challenger Marie Newman in the general election.

Jones, a long-time neo-Nazi, has repeatedly run for elected office, always unsuccessfully. He has been active in several political parties throughout the last few decades, including the conspiratorial and anti-Semitic Populist Party, the National Socialist White People's Party and, briefly, the American Nazi Party. And yet, during a CNN interview in early February, Jones insisted, “I don’t call myself a Nazi.”

While few believe Jones has any chance of winning the 3rd, where voters have elected a Democrat in 24 of the last 25 Congressional races, as a major-party candidate for a statewide seat, Jones will have a significant platform for his hateful views. The candidate’s website pairs “America First” language with outright Holocaust denial, including a “Holocaust Racket” diatribe that blames “Organized World Jewry” for perpetrating “the biggest, blackest lie in history.” Jones has called the Holocaust "nothing more than an international extortion racket by the Jews."

Jones and his wife are founding (and possibly sole) members of the neo-Nazi America First Committee, which operates under the Nationalist Front umbrella. He often attends events organized by the neo-Nazi National Socialist Movement (NSM), including the April 2017 rally in Pikeville, where he told the crowd, “I don’t care about the blacks, I don’t care about the Mexicans… I care about you white people. This movement is about one thing only…the preservation of America as a white nation.”

In August 2015, Jones took the stage at an NSM rally in Toledo, saying that African-Americans (he used an expletive instead) shot by police “got what was coming to ‘em.” He continued, “When a National Socialist regime takes power, and it's only a question of time, we will sweep the streets clear of all the criminals, the pimps, the whores, the drug dealers, the pornographers all will be swept up off the streets like the scum that they are. And the queers, you're gonna go back in your closets.” Jones went on to say, “We stand for America. We stand for the white race. We stand for the Christian foundation to this country… We are going to smash the queer movement. We’re going to destroy the Zionist movement. We're gonna crush the black criminal movement. And we're gonna deport all these illegal aliens that are imported in here, taking away jobs from Americans. That’s what we're going to do. That’s what this party is all about.”

Jones has been involved with anti-Semitic and racist groups since the 1970s. In 1979, he donned Nazi garb to participate in an anti-integration rally in Chicago. In April 2009, Jones protested the opening of the Illinois Holocaust Museum in Skokie, Illinois, along with the NSM and the Illinois National Socialist Front (INSF).

Throughout his career, Jones has participated in numerous extremist events, including neo-Nazi rallies and celebrations of Adolf Hitler's birthday. One such event was organized in April 2008 by the neo-Nazi American National Socialist Worker's Party (ANSWP), a now-defunct neo-Nazi organization which Jones supervised for several months in 2008.

At a similar event in April 2011, Jones told a reporter that the group was also celebrating the start of the American Civil War in 1861. Alongside a birthday cake dedicated to Hitler, Jones said, there was a second cake decorated with the words "The South Was Right. White Men Fight."