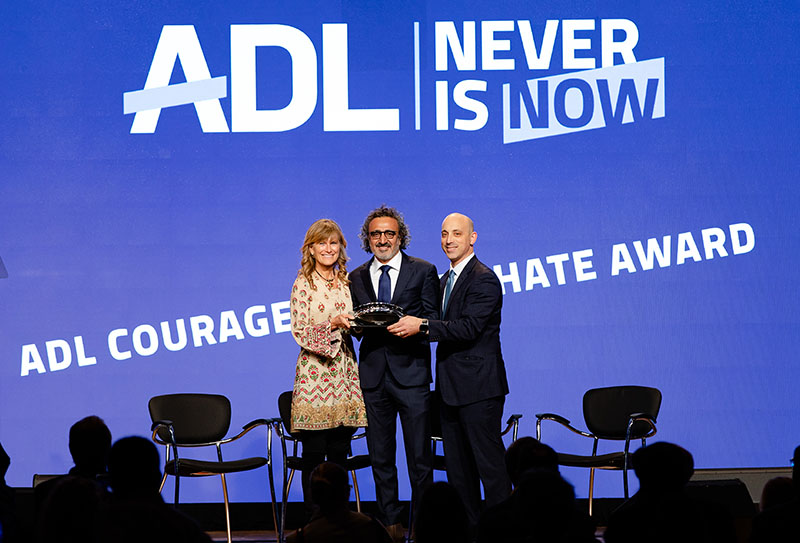 Remarks by Hamdi Ulukaya, CEO of Chobani and Recipient of ADL's Courage Against Hate Award

Thank you Jacqueline, for those incredible words.

One of the fun things about being a parent in America is Halloween.

This year, we told our son that he could be anything he wanted to be. A ghost. A pirate. A soccer player.

He chose to be Captain America.

But he didn't stop wearing the costume when Halloween ended.

He still carries the shield with him everywhere he goes.

It makes me think about the superheroes we know in our own lives.

Who are selfless and brave. Who change lives every day... and leave the world much better than they found it.

For me, that person is Jacqueline Novogratz.

Her work as a social entrepeneur in Africa and Asia inspires me every single day.

Jacqueline, thank you for being such a good friend, mentor, and role model.

This is quite an honor. Standing here, I’m reminded of a story of a man who survived a famous flood. He spent his whole life talking about the flood.

When he got to heaven, he asked that a crowd be gathered so he could talk about his experience with the flood.

They said, “We would be happy to, but you have to remember – Noah will be in the audience.”

That’s how it feels to get a “Courage Against Hate” award from the ADL.

For more than 100 years, the ADL has shown all of us what it means to be brave in the face of hate, and violence, and bigotry.

You have taught us what it means to stand up for human rights and human dignity.

On behalf of my brothers and sisters at Chobani, and at TENT, I want to thank you for your leadership.

I wish we could be meeting today under better circumstances.  In fact, I wish we didn’t have to be here at all.

But we know that across the world, there is a plague growing once again.

But that plague – of hate – was only sleeping.  Now, what Rumi once called the “candle of darkness” is spreading again … here … and across the world.

As long as there have been human beings, there has been hate, driven by fear. But nobody has the right to use that hatred to cause violence to others.

We have seen too many victims of that hatred in recent years … whether in a synagogue in Pittsburgh … a Wal-Mart in Texas … or a mosque half-way around the world.

Because of that plague, more than 25 million people sleep away from their homes, in camp, on the streets, on the road -- half of them  are children.

Twenty-five million people who have been forcibly driven from their homes, and their lands, and their lives – through no fault of their own.

Simply because of who they are, how they talk, and how they worship.

They are the true heroes who show courage in the face of hatred every single day.  We are here today to say: ENOUGH.

This is the moral challenge of our time.  In too many places, NEVER AGAIN is happening RIGHT NOW.

And if we can’t find a way to help people being targeted simply because of their ethnicity, it’s not a failure of their humanity. It’s a failure of ours.

As the ADL has taught us:  Hate is not natural.

As Nelson Mandela once said, “no one is born hating another person because of the color of their skin, or their background, or their religion.  People must learn to hate. And if they can learn to hate, they can be taught to love, because love comes more naturally to the human heart.”

That’s a lesson I learned from my mother.

We were shepherds, raising sheep and goats in the mountains in eastern Turkey.

There were Alawis and Sunnis, Kurds and Turks, locals and nomads.

I was aware of our differences, but I wasn’t taught that we were different.

My mother didn’t feed us the poison of hate. She never looked down on anybody.

Instead, my mother and my father taught us that real leaders don’t bully other people.

Real leaders don’t stir up anger and resentment of other people.

Real leaders don’t channel hatred into violence against other people.

My parents taught us that being strong means being compassionate.

That being powerful means being kind.

And that you don’t get true respect by demanding it. You earn it by treating other people with respect.

On the mountain, the biggest danger we faced was from wolves.

When wolves come, they don’t just kill one sheep. They kill them all. They wipe out everything you have in a few minutes.

“Like Moses,” my mother would say, “Sometimes that meant we had to be shepherds.  And sometimes it meant that we had to be warriors.”

I’ve remembered that lesson ever since.  In every part of our lives, I believe we all have to be shepherds and warriors.

When I started Chobani, I wanted the company to be a shepherd. I believe that strong businesses and strong brands can help bring people together.

In fact, “Chobani” is the Turkish word for “shepherd.”  We’ve worked hard to be worthy of that name – by taking care of our own, putting employees first, and giving back to our community.

One time, our company ran out of people to hire in our town.

I remembered that in Utica, about an hour away, refugees from Africa and Southeast Asia were looking for a place to work.

“They don’t speak English,” someone told me. I said, I don’t really either — but let’s hire translators.

“They don’t have transportation,” others said.  So, I said, let’s get some buses.

And it changed us for the better.  I am proud that today, a large portion of our factory employees at Chobani are immigrants and refugees.

On immigration, sometimes, creating a diverse workforce also means being a warrior.

When we hired refugees for our plant in Twin Falls, Idaho, a right-wing radio guy went on the air and said terrible, hateful things about them and us.

We didn’t ignore it.  We pushed back – and he apologized.

The one thing I’ve learned about bullies is that if you stand up to them, they’ll back down.

We have to fight the plague of hate and intolerance with truth. As Martin Luther King said, “darkness cannot drive out darkness. Only light can do that.”

One place we desperately need to shed that light today is in northern Syria.

What is happening to my brothers and sisters in Syria today is not just a border skirmish. It is not a military action. It’s ugly and it’s unforgiveable.

We’ve all seen the images of bombs falling on innocent people. Crying mothers holding dead children in their arms. More than 300,000 people forced to flee their homes.

We can’t grow numb to this. We need to speak out for those who can’t speak for themselves.

We expect governments to protect the innocent. But when they don’t, ordinary people have to step in.

I’m not a political person. But if government isn’t willing to act, I believe that business must lead.

This isn’t about politics. It’s about basic human decency.

We need business to be warriors, to say: you may think it’s the right choice to protect oil fields over people, but -- we -- don’t.

We need to pressure our elected leaders to end the violence. Protect the innocent. Provide the assistance necessary to house, heal, and feed refugees. And help them and their children find peace.

Over the long term, if we are going to end the global refugee crisis, we need business to be shepherds, too. At Chobani, at TENT, our message is simple:

This is a time when the private sector must lead.  We know: the minute a refugee has a job is the minute they stop being a refugee.  A job gives them roots. A community. A chance to start over.

I know because I’ve seen it.  When I think about it, I see the faces of two sisters from Afghanistan.

The Taliban killed their father. Their mother feared for their safety, so she hired a smuggler.

When they got to the border, the smuggler took the girls across, and said he'd come back with their mother, but he never did.

They had nothing. But an Afghani family saw them and took them to their home.

They ended up staying for four years.

One day, they got connected to a Jewish Refugee Organization.

A Jewish woman from Ohio and her Christian husband wanted to help. They acted like parents to them. They registered the girls and applied for settlement in the United States.

Seven years ago, both sisters got accepted to the US and settled in Idaho. The week they arrived, they were told that a new plant was opening, and it was hiring everyone.  They applied and got jobs.

It was Chobani.  The first week, I saw one of the girls in tears. She told me that she and her sister had just been through the most difficult journey.

She wanted to thank me. But I had done nothing but give them a chance.

Over the next few years, I watched them from a distance. They both became rock stars on the factory floor. They got an apartment together and bought a car. Both were accepted to university.

In 2016, when Chobani sponsored Team USA in the Olympics, the people in our Idaho plant picked those two sisters to represent us in Brazil.  It made me so proud to see them waving the American flag.

Sadly, they haven’t heard from their mother. But the couple they met from the Jewish Refugee Agency still acts as surrogate parents to them.

And when people ask her where she comes from, she says "my Mom is Jewish, my Dad is Christian man from Ohio and I work at Chobani in Idaho where we make Greek yogurt, and my boss is Kurdish From Turkey."

Honestly, I can’t think of anything more American than that.

This is the only country on earth were this kind of thing is even remotely possible. Because it’s in your DNA. Because everyone here comes from somewhere else.

To you, my fellow shepherds... my fellow warriors... I say:

Back on the mountain, there is a tradition that I will never forget. If wolves do attack, and a family loses their whole flock, an incredible thing happens.

The next day, all of the other shepherds bring their sheep to the family who lost their flock.

Every other family contributes to help make them whole again.

It’s a custom that goes back 1,000 years.  The idea that nobody should be forced to walk alone or be left alone to face hardship or tragedy.

That’s what “community” meant to us growing up.

I refuse to believe that Kurdish nomads on a remote mountain have a bigger concept of “community” than the rest of us.

The wolves of intolerance and hatred are out there.

We will beat them just as we’ve always beaten them: by working together … as shepherds and as warriors … to dig in our heels … raise our voices … and counter their hate with love.

This award -- this gathering -- is a reminder that when we stand together … and fight together … courage will conquer hate each and every time.