In the wake of a whistleblower complaint, Facebook has come under criticism for failing to take adequate measures to address hate speech on its platform. ADL has repeatedly noted that the company relies too heavily on artificial intelligence to manage hateful content, and that instead, social media companies such as Facebook need to step up enforcement at scale and by design, changing their basic approach to content amplification, manual review, and transparency.

While the headlines in the U.S. have focused on English-language posts, objectionable content is evident across languages and actually appears just as if not more pervasive in languages other than English. One particularly chilling example involves how Facebook approaches the promotion of the Protocols of the Elders of Zion on its platform in Arabic-language posts.

The Protocols of the Elders of Zion is arguably the most iconic and deadly antisemitic slander in modern history, and while it was written in Europe and has had a global reach, it has found its most receptive audiences in the Middle East in Arabic as well as Persian.

And yet Facebook has failed to take even the most basic of steps to limit the spread of this hateful treatise, such as stopping users from exploiting its platform to create large Facebook groups or pages that are expressly aimed at promoting the Protocols to Arabic-language audiences. With even a cursory examination, ADL was able to find dozens of large Facebook groups or pages in Arabic expressly devoted to this purpose, with at least 100 likes or followers, roughly half of which had more than ten times that in followers or likes.

And there is no compelling reason to think that this challenge of obvious cyberhate on Facebook is somehow exclusive to Arabic-language content, or exclusive to cyberhate targeting Jewish people. Searching Facebook for common hateful tropes about other vulnerable communities and in other languages also returns disturbingly large Facebook groups or pages with hate speech even in their very names, such as in cases of anti-Baha’i content in Persian, anti-Armenian content in Turkish, and extensive anti-Muslim content in English, to note a few other examples.

Why The Protocols and Why in Arabic?

Facebook claims that it takes identifying and removing hate speech very seriously because hate speech can contribute to intimidation, exclusion, and even violence. It asserts that its use of artificial intelligence tools to proactively find and take down hateful content are so effective that they were responsible for 97.6% of recent cases in which Facebook removed hateful content, such that it only relied on Facebook users or civil society to flag the remaining 2.4% of cases.

Facebook acknowledges that most of their enforcement efforts are carried out in English. Even aside from recently leaked documents allegedly showing that Facebook’s own employees dispute Facebook’s claims, it’s clear that Facebook’s automated systems don’t identify a majority of hateful content on the platform. Facebook would miss huge swaths of hateful content even if its execution was perfect. So a key question is how well Facebook handles hate speech in other languages. In response to a recent inquiry by Arab News, a spokesperson for Facebook stated that “our technology proactively identifies hate speech in over 40 languages globally, including Arabic.” However, whistleblower Frances Haugen asserted to Congress that Facebook has “documentation that shows how much operational investment there was by different languages, and it showed a consistent pattern of underinvestment in languages that are not English.”

And if Facebook were effectively looking for messages on its platform that endorse the Protocols in languages other than English, Arabic would be an obvious first place to look. Even the United Nations – an institution with notorious blind spots on antisemitism – is aware of the Protocols’ popularity with Middle Eastern audiences. Indeed, as a 2019 report by U.N. Special Rapporteur on Freedom of Religion or Belief Ahmed Shaheed pointed out, conspiracy theories alleging “that Jews constitute a ‘powerful, global cabal’ that manipulates governments, the media, banks, the entertainment industry and other institutions for malevolent purposes, are also expressions of antisemitic attitudes. Many of those negative stereotypes were promulgated in the Protocols of the Elders of Zion, a discredited forgery published in the early twentieth century and widely disseminated in the Middle East, alleging a secret Jewish plan for world domination.”

Furthermore, the Protocols should be an undeniably clear-cut case for strict enforcement by Facebook, since the company’s definition of prohibited Tier 1 Hate Speech expressly includes dehumanizing generalizations about “Jewish people running the world or controlling major institutions such as media networks, the economy or the government.” The Protocols, of course, are the single most iconic example of that hateful antisemitic libel. Additionally, the book’s main thesis is so inherently demonizing that hardcopy editions of the Protocols frequently depict Jewish people as monstrous beasts such as a serpent, spider, octopus or demon.

As such, whether or not Facebook proactively takes effective steps to prevent the Protocols from being widely disseminated on its platform in Arabic should be a very easy test for the social media platform if, as it claims, Facebook can be trusted to vigorously tackle hate speech on its own. If, however, Facebook fails to pass even such a basic test of its proactive enforcement measures, it raises very serious, widely generalizable concerns about Facebook’s fundamental ability to tackle hate speech and ensure that its services are not amplifying such harmful content.

Simply by searching for variants of the title Protocols of the Elders of Zion in Arabic, ADL found dozens of large Facebook pages or groups featuring clear references to the Protocols in their titles alone –39 to be exact. All of these 39 pages or groups had over 100 likes or followers, and 19 of them had over 1,000. In total, these groups and pages had been followed over 70,000 times and 34,000 likes.

The fact that so many Arabic-language Facebook groups and Facebook pages had been created to promote the most iconic work of Tier 1 Hate Speech against Jews in modern history suggests strongly that the platform is failing to uphold even its most basic responsibilities and stated policies when it comes to horrific hate speech against Jews across the range of languages serviced by Facebook.

Just the titles alone of these Facebook groups and pages should have been a sufficient basis for the company to have automatically flagged them for review and suspension, yet many of the groups have been active for at least several years. And in that time, they have exploited Facebook’s reach to propagate hate speech about Jews that is severe, degrading, and dangerous.

For example, one Facebook page is simply titled “The Protocols of the Elders of Zion” in Arabic, and its web address is simply https://www.facebook.com/ProtocolsoftheEldersofZion/. It has over 2,000 followers and 2,000 likes, and it has been in continuous operation since 2013. Its “About” section states in Arabic that “the Protocols of the Elders of Zion is among the most famous books which expose the Masonic practices in world domination,” and that “Jews are nothing but the masters of the world and its corrupters.”

A second example concerns a Facebook group that also simply titled “The Protocols of the Elders of Zion” in Arabic and has over 4,000 likes and 4,000 followers. It describes itself as “a scientific political page against the enemy’s plans.” One of its posts alleges that COVID-19 is a Jewish plot to cull the world’s population. Another post promotes text from the first chapter of the Protocols and depicts Jews as a bloodthirsty half-pig beast standing on a human skull: 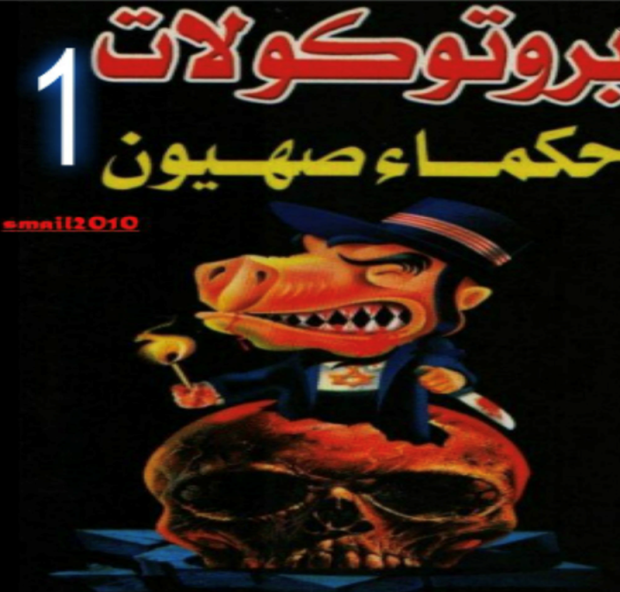 A third example is the case of a Facebook page in operation since 2011 that has the title in Arabic “The Protocols of the Elders of Zion and its applications” and has received over 2,000 followers and 2,000 likes. Its “About” section claims that “The Protocols of the Elders of Zion is considered one of the most dangerous documents which the Jews wrote, containing a plot to implement world domination” and that “the Jews must strive in every possible way to restore this power according to this malignant plot which has been operating for decades.” One of its five most recent posts urges readers to contemplate various shocking accusations from the Protocols “if you want to know why humanity hates the Jews, and shuns, chases, and hunts them.”

And another stark example, a Facebook page created in 2012 with over 1,000 likes and 1,000 followers, is titled “The complete book of the Protocols of the Sons of Zion” in Arabic. Its background profile picture shows a snake with Jewish stars encircling the globe. 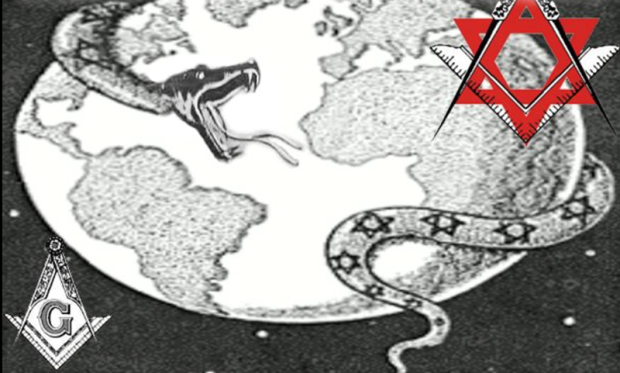 Hate Speech in Other Languages

Finding the Protocols in Arabic is disturbingly easy to do on Facebook, as are hateful tropes in other languages, about other vulnerable groups. And the tropes are so basic as to be relatively obvious; if Facebook’s proactive monitoring efforts were truly keeping the platform from permitting hateful content, then such common hateful tropes should not be so easy to find.

Objectionable content is also relatively easy to find if one searches Facebook in Persian using the derogatory term that the Iranian regime uses to refer to Baha’is: “the deviant sect.” For example, one Facebook group with 1,000 members is titled in Persian “the crime of the deviant Baha’i sect,” even though Facebook says it forbids referring to protected groups as criminals. That Facebook group’s cover picture depicts Baha’is as gruesome monsters or Satan-worshippers:

The cover picture of a Facebook group titled in Persian “The Crime of the Deviant Baha’i Sect” that has over 1,000 followers.

And it’s not as though Facebook is doing an effective job removing obvious hate speech even in its primary language of English. For example, several Facebook groups with thousands of followers boast names that emphasize variants of the Islamophobic trope which unfairly alleges that Islam is a cult or not a real religion.

One such Facebook community with thousands of followers titled “Islam is a cult” has a profile picture that calls Islam “a death cult,” as well as an “About” section that decries Islam’s “evil ways.” Its cover picture outrageously declares that “I have no problem with Islam except for:” and the proceeds to list a series of horrible anti-Muslim slanders, including ‘pedophilia,’ ‘terrorism,’ ‘illiteracy,’ ‘child beating,’ ‘animal cruelty,’ ‘rape,’ and ‘greed’.”

Another such Facebook community that has thousands of followers is titled “Islam is not a religion” and features a profile photo with a quote from anti-Muslim politician Geert Wilders calling Islam “the ideology of a retarded culture.” One of the ten most recent posts from the page includes comments from its readers that proclaim “you can’t coexist with people who want to kill you” and “the only way to deal with Islam” superimposed on an image pointing a gun in the mouth of Iran’s supreme leader, apparently portraying him as a stand-in for all Muslims: 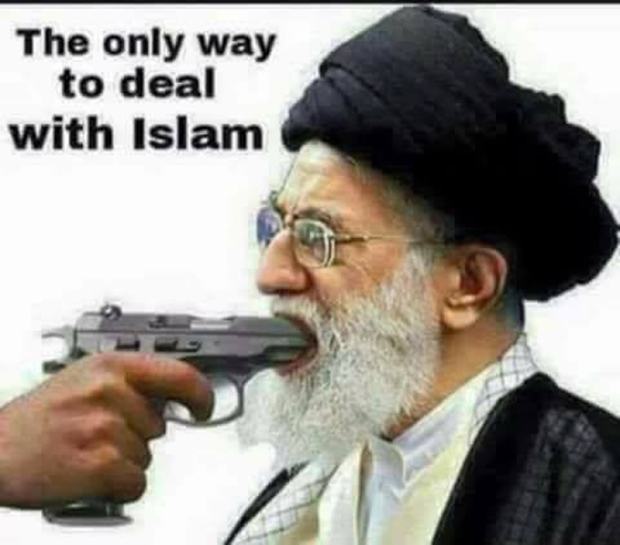 It is difficult to know what is more disturbing – the horrific hatred promoted by Facebook groups and pages such as these – or that Facebook claims it proactively takes down hate speech when groups and pages such as these have peddled blatant hate speech in their very names for so many years without consequence, and when such clear violations of its own policies are left to thrive for months or years on its platform, it begs the question – are they intentionally leaving these groups up, or are they just incompetent in their execution?

Either way, the conclusion is clear: Facebook needs to do much more to address such horrific hate speech on its platform, so that it does not continue to amplify such dangerous content.