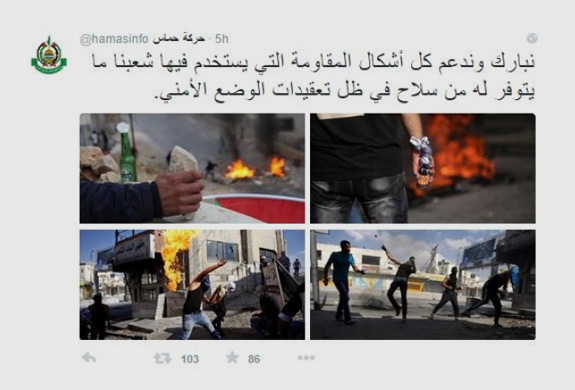 A tweet on the Hamas Twitter account reads, "We bless and support all forms of resistance in which our people use whatever weapons are available under the complicated security situation.”

The Abbas Approach Explains the Failure to Make Peace

While there was anticipation in some quarters that Hamas’s announcement of a new charter would signal a change, it turns out it was much ado about nothing. Hamas remains a deeply anti-Semitic organization committed to the path of terror and to the denial of Israel’s right to exist. Its new charter does little to advance peace but does much to sustain conflict.

Ahead of the rumored changes, reports circulated that offered hope in two areas. There were hints that Hamas might accept Israel within the 1967 borders and that it would eliminate the flagrant anti-Semitism that characterized its original charter.

While both issues were addressed, they were modified in ways that reinforced, albeit in different language, rather than reinvented the longstanding Hamas approach rather than introducing a new one. Regrettably Hamas remains the same Hamas—a thoroughly anti-Semitic, Israel-denying, terrorist organization. Or, as Hamas’s own leader Khaled Mashal colorfully explained last month in his own words:

"We were and we still are in an open war with [the] criminal enemy [Israel] It insists on the choice of jihad and resistance...[This choice] is Hamas's greater and first strategy...This is Hamas. Hamas is not changing its skin."

With regard to the ’67 lines, the new charter states that the “establishment of a fully sovereign and independent Palestinian State, with Jerusalem as its capital along the lines of the 4th of June 1967, with the displaced in their homes from which they were expelled, to be a formula of national consensus.”

But in the same paragraph where Hamas speaks of the ‘1967 lines, it also says: “Hamas believes that no part of the land of Palestine should be compromised or conceded, irrespective of the causes, the circumstances and the pressures and no matter how long the occupation lasts. Hamas rejects any alternative to the full and complete liberation of Palestine, from the river to the sea.” Which is it?

In other words, set up a state without recognizing Israel, in order to further the old goal of destroying the Jewish State.

The original charter was rife with the most blatant anti-Semitism. The ‘new’ charter claims to have nothing against Jews, only against “Zionists.” This seems to be a marked improvement from the original which contained a lengthy paragraph blaming all the wars since the French Revolution on the Jews. But in reality, there is less than meets the eye.

Throughout the document, which mirrors the original, there is a total rejection of the legitimacy of the State of Israel. Denying Israel’s right to exist is in itself a hallmark of anti-Semitism in the modern world. This fact is understood by all serious observers of the conflict, including the United Nations as UN Secretary General Antonio Guterres recently noted.

In that respect, there is not one word acknowledging the Jewish people’s legitimate connection to the land of Israel. This denial of any historic tie lies at the heart of Palestinian rejectionism—an ideological orthodoxy that already has done much to prevent any peace from emerging between Israelis and Palestinians.  It is a manifestation of classic anti-Jewish conspiracy thinking.  According to this school of thought, Jews have concocted a connection to the land to justify the racist, illegitimate Zionist state. 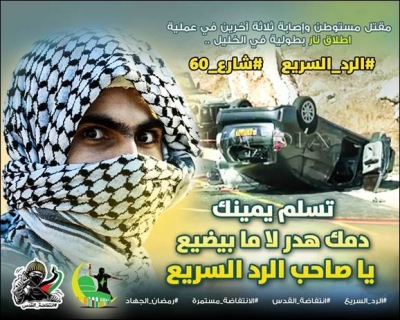 So what has changed?  Nothing substantially different from its predecessor.

Like the original, the new charter provides the rationale to engage in any kind of violence in order to achieve the goal of “liberation of Palestine”. Like the original, it rejects any agreement that concedes even the slightest matter to the “Zionist oppressor.”

So why all the fuss? Mainly, the new document is intended first to exonerate Hamas as the party responsible for the current division between the Palestinian people. The language of Palestinian consensus and of subscribing to PLO principles is meant to improve Hamas’s image with the Palestinian street.

Whether this attempt will bear fruit is uncertain, but there is no doubt that Hamas remains the primary threat to the Palestinian Authority, as evidenced by recent actions by PA President Mahmoud Abbas. The other target audience may be the global community, especially in the Arab world, as these countries have tired of Hamas’ continued reliance on terrorist activities and its anti-Semitic credentials.

But the reaction to Hamas by the international community must remain steadfast. These so-called changes appear to offer no change in Hamas’ objectives nor do they modify its strategy. The message from the family of nations must remain clear: We will reject you as long as you engage in terror, deny Israel’s right to exist, and express hatred toward the Jewish people.

The world must make clear that it will judge Hamas by its deeds as well as by its words.