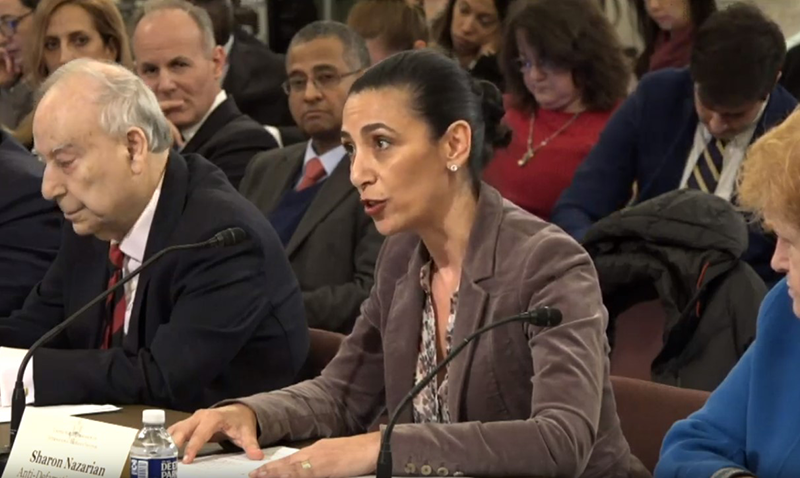 Thank you very much for holding this hearing and for inviting ADL to testify today.

Since 1913, ADL’s mission has been to stop the defamation of the Jewish people and to secure justice and fair treatment for all.

I lead ADL’s International Affairs division, which seeks to promote the security of Jewish communities abroad, fighting anti-Semitism, bigotry and prejudice, and working with partners around the world using ADL programs and resources regarding hate crimes, cyberhate, and anti-bias education.

Regrettably, our work, and our expertise on anti-Semitism and hate is more current and urgent than ever in the US and around the globe.  In the U.S., our comprehensive annual audit of anti-Semitic incidents found that anti-Semitic assaults doubled in the U.S. in 2018 and that the number of victims of such assaults tripled.  Given the daily reports of anti-Jewish attacks in 2019, along with the deadly violence of Jersey City, Poway and others, we know that 2019 will be one of the most serious years of American anti-Semitism we have witnessed.

ADL seeks to combat efforts to attack or delegitimize the Jewish state, and call out when such campaigns cross the line into anti-Semitism.  In Europe, we urge governments to support the security of local Jewish communities, to address potential threats, and to hold perpetrators of attacks fully accountable.  In Latin America and Europe we support communities and train students to stand up against anti-Semitism and extreme anti-Israel slanders.  And in the broader Middle East we name and shame governments that enable anti-Semitism, such as in their official textbooks.

I have personal experience understanding the fear and isolation that extremists can inflict on vulnerable communities and religious minorities, having left Iran as a child to flee the anti-Semitic oppression of Khomeini’s dictatorship.

The global anti-Semitism crisis is a core concern for religious freedom.  I think one of the signs at the march against anti-Semitism in New York this past week said it best: “if you need a security guard to practice your religion, you don’t have freedom of religion.”

Jews are often the first community targeted when pluralism is under threat.  They have been expelled from entire countries and suffered mass atrocities of the Holocaust and pogroms.  Today, anti-Semitic incidents often take the form of attacks against Jewish institutions or worshippers.  We see bans on kosher animal slaughter or on ritual circumcision that make it impossible for observant communities to remain.  Jews in many European countries, and now even reportedly in Brooklyn, are fearful of wearing religious garb, kippas, Stars of David, or other visible signs that they are Jewish.  Anti-Semitism is also a powerful driver of terrorism, as we saw in AMIA in Buenos Aires and at the HyperCacher in Paris.

Unfortunately, we have data to attest to worrying trends both in terms of anti-Semitic incidents and public attitudes.

As for attitudes, ADL recently polled public opinion about Jewish people in 18 countries where Jewish populations are significant.  In the 12 EU countries surveyed, as well as Ukraine and Russia, at least one in four respondents agreed with a majority of anti-Semitic stereotypes tested.

Just as anti-Semitic incidents can affect the sense of security for Jewish communities, so do governmental and societal responses.  For example, the “No Hate No Fear” solidarity march ADL cosponsored in New York this Sunday sent a powerful signal that tens of thousands of people will stand up against anti-Semitism.

Before Yom Kippur this year, the small Jewish community in Halle, Germany had asked for police protection.  The local police did not respond, so they weren’t there when a white supremacist opened fire.  Only following that attack did the German Federal Ministry of Interior gather state-level counterparts to develop a 10-point plan against extremism.

A member of my team was in Halle when the shooting took place and worked with the local Jewish community to support those who were targeted.  ADL, along with the Central Welfare Board of Jews in Germany, provided funds to establish a psychological help hotline for victims and the community.

USCIRF can be an important voice in urging governments to take proactive steps to better fight anti-Semitism.  Such actions include to:

Improve public reporting on anti-Semitic incidents as well as all other forms of hate violence and discrimination.

Ensure that governments have specific senior officials tasked with combating anti-Semitism and to do the same for all forms of hate.

Work closely with local Jewish communities to address issues of concern, including security and freedom of worship

Vigorously combat violent extremist groups that attack Jews or other communities, regardless of whether such extremists emerge from the right, the left, or religious or ethnic communities

And ensure that social media companies rigorously enforce robust terms of service against cyberhate, including the particular forms in which anti-Semitism manifests.

Thank you very much.  I look forward to your questions.