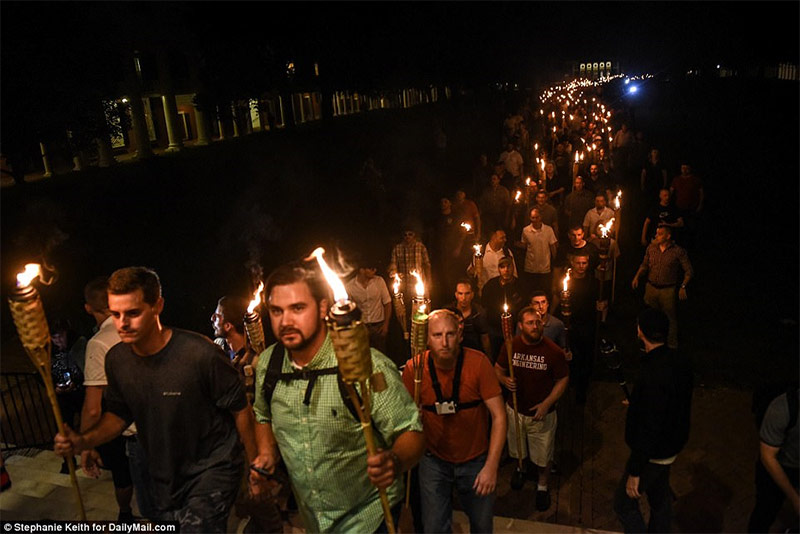 On August 11, 2017, the world watched in horror as hundreds of torch-wielding white supremacists descended on the University of Virginia campus, chanting, “Jews will not replace us!” The next day, the streets of Charlottesville exploded in violence, ringing with the racist shouts of the neo-Nazis, Klan members and alt right agitators who gathered in an unprecedented show of unity. Their stated common cause: To protest the removal of a Confederate statue from a local park. Their true purpose: To show to the world the strength and defiance of the white supremacist movement.

The promise of Unite the Right, organized primarily by alt right activist Jason Kessler, brought white supremacists of all stripes together for a weekend of protest that quickly turned to violence, culminating in the brutal murder of anti-racist counter-protester Heather Heyer. The white supremacist mayhem prevented the Saturday rally itself from actually occurring, as local and state police converged on the chaotic scene, urging everyone off the streets and away from the parks. Virginia Governor Terry McAuliffe declared a state of emergency and authorities shut down Unite the Right.

Despite this, high profile white supremacists like Richard Spencer and David Duke declared Unite the Right an overall victory. But the nation’s horrified reaction to the hate and violence at Charlottesville sparked a backlash against prominent white supremacists, and prompted rank and file racists to retreat from real-world white supremacist activity, back into the relatively safe confines of online activism.

One year later, what effects has Charlottesville had on the white supremacist movement? How has the country – its citizens and companies -- responded to the display of bigotry and violence last August?

The Unite the Right event demonstrated to Americans that 500-600 white men from around the country were willing to show their faces in broad daylight as they chanted racist and anti-Semitic slogans.  It soon became clear to the white supremacists that most Americans were far from happy about what they’d witnessed.  It wasn’t the “Right” that united so much as it was the bulk of the American people, coming together to condemn the violence and hate at Charlottesville.

In the days and weeks after Unite the Right, a number of white supremacists who were on the ground in Charlottesville learned that actions have consequences.  This was the inevitable fallout of a movement moving from the virtual world to the real world, but it seems that some Unite the Right participants—many of whom were relatively new to white supremacy and certainly fresh to its on-the-streets activism—were unprepared for the blowback.

Some lost their jobs or were ostracized at school after they were identified in photographs of angry tiki torch marchers, or other images from the event. Some were arrested for assaults at Charlottesville after being similarly identified.

Crowdfunding websites more aggressively policed their campaigns, dropping various white supremacist accounts.  Neo-Nazi website The Daily Stormer, which posted a derogatory story about murdered counter-protester Heather Heyer, was dropped by web hosting company GoDaddy. Attempts by Andrew Anglin, the site’s owner, to find another permanent home for it led to months of failure as one new host after another dropped the site, which he eventually succeeded in reestablishing. Stormfront, another popular white supremacist site, also experienced difficulties remaining on-line, though these, too, turned out to be temporary.

A year after Charlottesville, efforts to deny white supremacists the online platforms they use to promote their hate continue. As recently as July 2018, PayPal denied its money transfer services to the prominent Swedish/American alt right website Red Ice. It also cut off the crowdfunding site FreeStartr because it is used by extremists, an action FreeStartr complained was “Silicon Valley Apartheid.”  Earlier in July, a Gizmodo article suggested that Twitter was deprioritizing some white supremacist accounts in its search results--including those of Unite the Right figures Jason Kessler and Richard Spencer.

And while the response from a number of social media platforms – including Facebook, Twitter and Reddit -- has forced some prominent alt-right adherents to migrate to other platforms, like Gab, these new platforms allow networking with likeminded sympathizers in even more concentrated echo chambers.

However, any harmony was short-lived: In the days immediately after Unite the Right, those divisions re-emerged, stronger than ever.  The Charlottesville backlash renewed and amplified the internal debate among white supremacists over the issue of “optics.”

The optics debate resurfaces whenever white supremacists receive focused negative media attention, like when Richard Spencer held a conference shortly after the presidential election and shouted “Hail Trump, hail our people, hail victory!” as some of his supporters gave Hitler-style  “sieg heil” salutes (sieg heil” is German for “hail victory”).  Essentially this debate boils down to whether or not hardcore white supremacist ideology can better be promoted in America with Nazi-like symbolism and imagery or with American nationalist symbolism and imagery.

The latter camp argues that dispensing with swastikas and Nazi-like uniforms in favor of polo shirts and khakis will make white supremacist ideology more palatable to modern Americans.  The former camp’s goal, in the words of white supremacist Brad Griffin, “is to smash the existing taboos with blunt force and create polarizing social media spectacles.”  Calling it the “cultural vanguard strategy,” Griffin claimed that, “we’re going to hold public demonstrations, assert our values like men in the public square…growing stronger….as we attract and gather more angry, alienated, disaffected White Americans.”  According to Griffin, Unite the Right wasn’t a bad idea; Charlottesville was simply the wrong place to try it.

Other white supremacists aren’t sure that any of these strategies will work.  “It’s not about ‘optics,’” claimed one alt right blogger earlier this year, “it’s not about uniforms, helmets, polo shirts, torches, banner drops, flags or monuments.  I question the very concept of ‘activism’ in the real world in and of itself.”

The white supremacist debate over “optics” is unsolvable, because what repels most Americans is not whether the hardcore white supremacist message is accompanied by swastikas—they are repelled by the message itself.  Nevertheless, many prominent white supremacists expended considerable energy in the last year engaging in debates over optics and responding venomously to fellow extremists who disagreed. This has fed disunity within the movement.

The lingering effects of the post-Charlottesville backlash and the division and disunity it caused within the white supremacist movement are evident in Jason Kessler’s attempts to organize a Unite the Right anniversary event in Washington, D.C.  The movement-wide organizing and promotional efforts that marked the original event are nowhere to be seen this time around.  Rather, the attempts to organize Unite the Right 2 have starkly illustrated how much division there currently remains within the white supremacist movement.

In the months leading up to Unite the Right 2,  Kessler has lashed out at Richard Spencer, Christopher Cantwell and Atomwaffen, while California white supremacist and erstwhile political candidate, Patrick Little, told Kessler that he would not come to the event and demanded that Kessler “stop punching right,” i.e., stop criticizing other white supremacists.  The League of the South similarly criticized Kessler; its leader, Michael Hill, reportedly said on a podcast that, “We don’t have anything to gain by going back.”

Other white supremacist groups and individuals have also announced they would not be attending Kessler’s planned sequel to Unite the Right:

However many people the event attracts, it seems clear that there will be significantly fewer white supremacists than were on the ground in August 2017.

UTR2 will almost certainly attract counter-protesters, and that may or may not include antifa. This means local law enforcement must be prepared for potential clashes, and plan ahead to maintain physical separation between the opposing factions.

In the past year, antifa groups have consistently confronted far-right groups across the country, sometimes leading to violent confrontations. A late June skirmish in Portland, Oregon, between antifa and Patriot Prayer members sent five people to the hospital, including an antifa member who was beaten and suffered a brain hemorrhage, according to press reports.

While post-Charlottesville setbacks have prompted some right-watchers prematurely to proclaim the demise of the alt right, its adherents have not yet lost their hateful energy and enthusiasm.

Many of these challenges have primarily affected prominent individuals like Richard Spencer, but have had little or no effect on rank and file white supremacists.  In many cases, white supremacists have been able to compensate for some of the de-platforming that has occurred.  The alt right in particular has embraced podcasts as a way to reach followers.  Podcasting platforms have not yet effectively responded to white supremacist exploitation.

White supremacist podcast audiences are not large by the standards of mainstream podcasts but represent significant audiences for white supremacists.  Some alt right websites, such as The Right Stuff, run by Mike Peinovich (using the pseudonym “Mike Enoch”), are virtual networks that feature many alt right podcasts, with the most popular having tens of thousands of subscribers.

Some white supremacists continue to show up at protests – since August 12, 2017, ADL has tracked 54 public events attended by white supremacists. In the past several months, approximately two dozen League of the South members held a flash demonstration on the Edmund Pettus Bridge in Selma, Alabama; and roughly 50 Identity Evropa members and associates gathered for a flash demonstration at the Parthenon in Nashville, Tennessee.

But in many cases, white supremacists have responded to increased pressure and public derision by shifting tactics.  Alt right activists who might not be interested in showing themselves at a large public event can still anonymously visit a university campus at night and put up white supremacist flyers.  Others might drape a white supremacist banner over a freeway overpass.  Charlottesville seems to have had no negative impact on these types of tactics.  In fact, propaganda efforts have only increased in the past year.

White supremacists have also increased their visibility over the past year by running for office, particularly in off-year congressional contests.  While at least some white supremacists run for office every campaign season, often as third-party, independent or write-in candidates, the 2018 election cycle has seen a number of white supremacists seek Republican Party nominations for major office.  While the GOP, especially at the state level, has publicly denounced almost all of its extremist candidates, most continue to campaign as “Republicans.”

These candidates include longstanding white supremacists like neo-Nazi Art Jones, who actually won the Republican nomination for Illinois’ 3rd Congressional District (Jones ran unopposed because the seat is considered a “safe” seat for Democrats), as well as younger white supremacists like Paul Nehlen, who is running for outgoing Wisconsin Republican Paul Ryan’s congressional seat.  Nehlen, in particular, is a darling among the alt right.

A year ago, President Trump refused to unambiguously denounce the hateful violence at Charlottesville, proclaiming that there was “blame on both sides” and “very fine people on both sides.” Even after the outcry that met the President’s equivocation, Department of Homeland Security Secretary Kirstjen Nielsen doubled down at a public event in July, stressing that “what’s important” about Charlottesville is that “it’s not that one side is right and one side is wrong.”