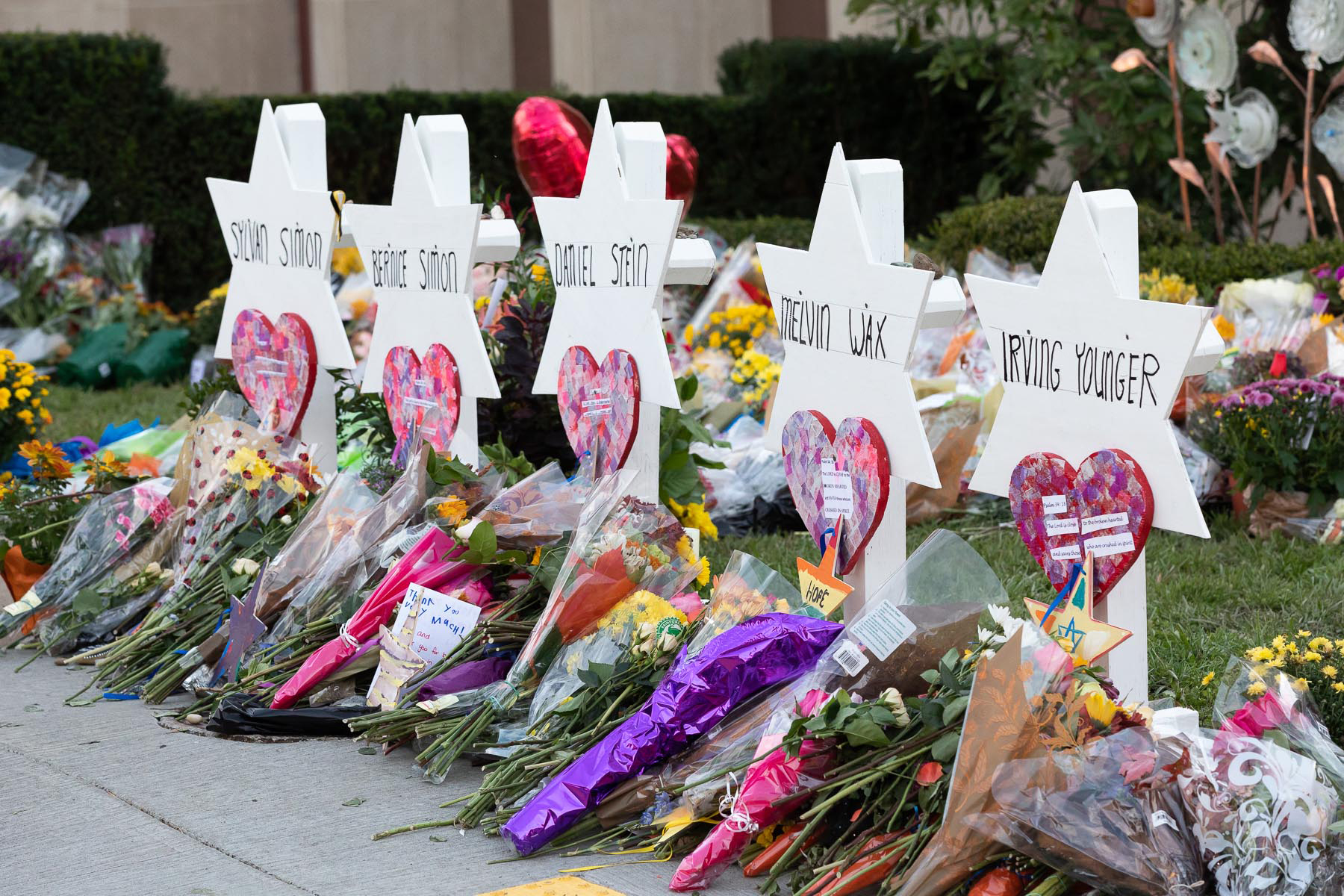 A memorial outside the Tree of Life Congregation Synagogue in Pittsburgh to remember the victims of the mass shooting on October 27, 2018.

Talking to Young Children about Bias and Prejudice

Oct 30th, 2012
For Educators | For Parents, Families, and Caregivers

Note: In reviewing this information and sharing it with family members, be aware that some of the details and information are not suitable for younger children.

On the morning of October 27, which was a Saturday (Sabbath, or the holy day, for the Jewish community) Robert Bowers entered the Tree of Life Synagogue in Pittsburgh, PA, yelled “All Jews must die,” and opened fire on the congregants. He was armed with an assault rifle and several handguns, and killed eleven congregants and wounded six others, four of whom are police officers. The names of who were killed are: Irving Younger, Melvin Wax, Rose Mallinger, Bernice Simon, Sylvan Simon, Jerry Rabinowitz, Joyce Fienberg, Richard Gottfried, Daniel Stein, Cecil Rosenthal and David Rosenthal. This shooting is the deadliest attack ever on the Jewish community in the U.S.

The shooter posted on Gab, a social media site frequented by right-wing extremists, which highlighted his strong antisemitism beliefs. Alongside his antisemitic comments, Bowers also posted xenophobic (anti-immigrant) content, claiming that Jews are helping to transport members of the large groups of undocumented immigrants making their way north towards the U.S. from Latin America.

It is important to understand this incident in the context of antisemitism in the U.S. In its annual 2017 Audit of Antisemitic Incidents, ADL found that the number of reported antisemitic incidents in the U.S. rose 57% in 2017, the largest single-year increase on record and the second highest number reported since ADL started tracking such data in 1979. There was a total of 1,986 incidents, which fall into three major categories: harassment, vandalism and assault.

The sharp rise of incidents was in part due to a significant increase (94%) in incidents in schools and on college/university campuses (87%), which nearly doubled for the second year in a row. Although the largest number of incidents typically occurs in public areas, in 2017, K-12 schools surpassed public areas as the locations with the most antisemitic incidents, with a total of 457 reported incidents being reported.

One way to understand violent and tragic incidents like these is through the Pyramid of Hate. The Pyramid shows that biased attitudes, behaviors and actions, grow in complexity and severity from the bottom to the top. Although the behaviors at each level negatively impact individuals and groups, as one moves up the pyramid, the behaviors have more life-threatening consequences.

Like a pyramid, the upper levels are supported by the lower levels. If people or institutions treat attitudes and behaviors on the lower levels as being acceptable or “normal,” it results in the behaviors at the next level becoming more accepted. The Pyramid of Hate demonstrates the way that biased attitudes and behaviors can escalate if they are unchecked or unchallenged by others. It also illustrates how systemic oppression and genocide is built upon the acceptance of behaviors described in the lower levels of the pyramid. Conversely, when those lower levels are addressed and confronted, the escalation gets interrupted and the more serious levels of oppression and hate are halted.