It’s no secret that anti-Semites have found a home on Twitter. The platform’s ubiquity and anonymity provide a fertile environment for these bigots and trolls.

To quantify the scale of anti-Semitism on Twitter, ADL’s Center on Extremism launched a yearlong study in January 2017. The ensuing report, “Quantifying Hate: A Year of Anti-Semitism on Twitter” estimates that 4.2 million anti-Semitic tweets were shared or reshared in a one-year period. The report includes a detailed review of our findings and offers recommendations for Twitter to consider as it continues to address this problem. 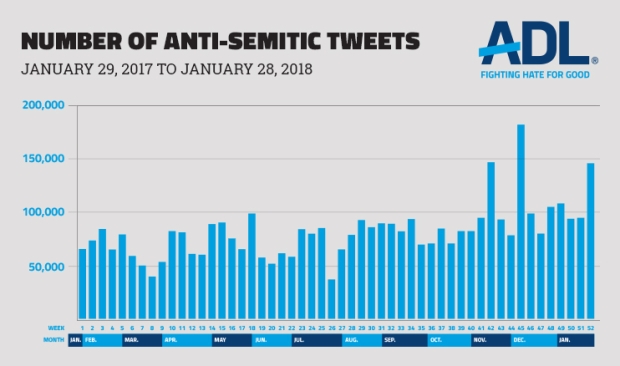 Beyond Twitter, this report’s findings will be useful to other platforms that are designing artificial intelligence-based efforts to counter anti-Semitism and bigotry online.

“4.2 million tweets is a very small number out of the trillions of tweets sent on the platform each year. But that does not negate the lived experience of Jews who have found Twitter to be a toxic environment.” - from Quantifying Hate: A Year of Anti-Semitism on Twitter

ADL in the Media