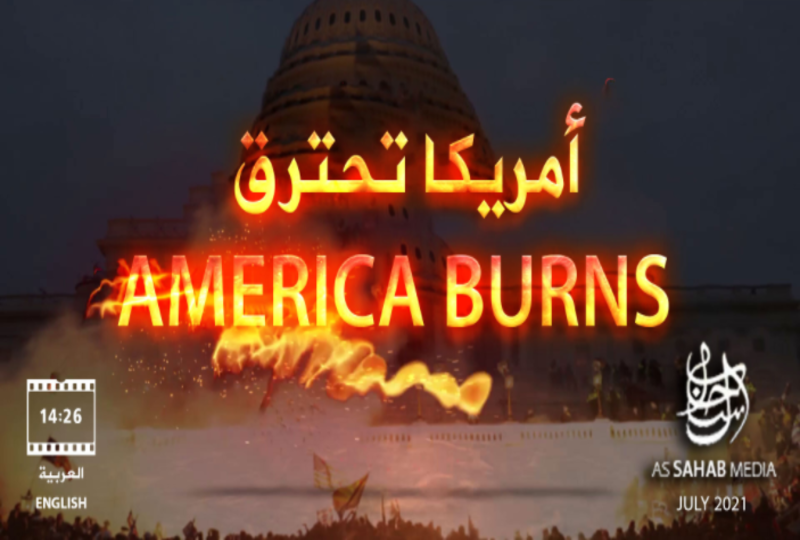 On July 19, 2021, terror group Al Qaeda released a propaganda video entitled “America Burns.” The video, which reprises the content of an article by the same name published in April 2021 in Al Qaeda’s One Ummah magazine, runs just under 15 minutes and is available with both Arabic and English subtitles. This video was uploaded to Filelocker, an online filesharing service frequently utilized by extremists, and shared widely across Al Qaeda media platforms, including its profiles on RocketChat and ChirpWire.

Unlike the original article, which was available only in Arabic and was clearly aimed at a foreign audience, this video is directed at a domestic American audience. It seeks to portray the United States as weakened, divided, and declining, while Al Qaeda and other extremist groups are positioned as ascendant. This propaganda provides two key pieces of information; first, that Al Qaeda continues to see attacking the U.S. as a critical objective in its overall mission, even though much of Al Qaeda’s growing strength comes from its affiliate groups throughout the Middle East, North Africa and Central Asia. Second, the video’s references to lone wolf attacks implies that Al Qaeda may still lack the means to direct sustained attacks within the U.S., and instead hopes one or more individuals take the initiative on their own.

Like the article, the video uses clips and voiceovers to identify the “five sides of America’s coffin” which it claims will result in the destruction of the nation: the COVID-19 pandemic, racism, a declining economy, political divisions and attacks by Al Qaeda mujahideen. The specificity of the clips demonstrates that Al Qaeda is watching the U.S. closely – United States fiscal policy, for example, gets its own segment -- and will latch onto any purported evidence of American decline.

The video makes frequent comparisons between American political crises and those in the Middle East. For example, the narrator refers to Trump as “the American Ghaddafi” and his supporters as the American Daesh (the Arabic acronym for ISIS). The video also compares the Black Lives Matter movement and the protests after George Floyd’s killing to uprisings in Egypt after police beat and killed Khaled Mohammed Saeed, an Egyptian businessman who was said to have evidence of police corruption.

These references serve to describe the American events to an Arab audience and to sympathetically equate U.S. domestic strife with events in the Middle East. One of Al Qaeda’s goals is to inspire attacks in the U.S., and this video portrays the American security situation as equivalent to that in potentially unstable Arab states – in an effort to suggest the U.S. is vulnerable to attack.

The video also highlights Al Qaeda’s past attacks against the U.S., claiming that it was God’s will that, on September 11, 2001, the fourth plane failed to reach its intended target so that on January 6, 2021, Americans could attempt to destroy their democracy “with their own hands.” Mohammed Sayeed al Shamrani, a Saudi air force lieutenant who attacked a Pensacola, Florida, Naval Air Station in December 2019, is briefly shown on screen. Al Shamrani was a sleeper agent for Al Qaeda in the Arabian Peninsula, and his attack was the last time Al Qaeda or one of its affiliates successfully planned and directed an attack in the United States. 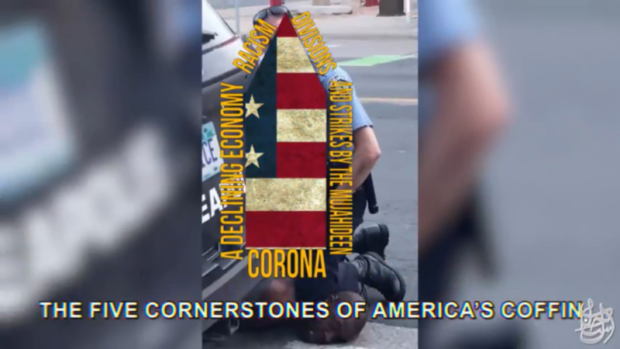 The video’s goal appears to be inspiring rather than directing additional attacks, and the tone indicates that Al Qaeda believes one path to this goal is exploiting racial tensions in the U.S.; it concludes with short clips of Al Qaeda’s reclusive (and possibly deceased) leader Ayman al Zawahiri combined with part of a speech from African American activist Malcolm X.

Al Zawahiri asks “the blacks, people of color, the red Indians and the Spanish” to rise up against white Americans as retribution for slavery and racism. Islamist extremist groups often argue that they represent an equitable and racially neutral governance alternative to racist Western structures. Al Qaeda frequently references racial inequity in the U.S. as a pitch to try to recruit marginalized communities. In June 2020, the group published an issue of One Ummah that covered the protests over the murder of George Floyd with a similar message about the futility of trying to right the U.S.’s racial wrongs.

There is no evidence to suggest that Al Qaeda has particularly succeeded in radicalizing or attracting its intended audience. Rather, the video makes clear that the group has determined this may be an effective rhetorical strategy for recruiting Americans, while appearing relevant and engaged with U.S. domestic issues.

The themes presented in the “America Burns” video are not new for Al Qaeda—the cultural and moral decay of the West is one of their most common propaganda claims. However, as Al Qaeda gains momentum from its affiliate groups and the U.S. withdrawal from Afghanistan creates a safe haven, it is important to take note of Al Qaeda’s expressed priorities and talking points.

For example, in December 2020, the Department of Justice brought charges against a Kenyan Al Qaeda operative who underwent flight training in the Philippines with the intention of carrying out a 9/11-style attack against the U.S. While security services thwarted the plan, it is a troubling signal of Al Qaeda’s intentions going forward.

The terror group has clearly adopted the narrative that America is descending into political, racial, and economic strife while Al Qaeda and the Taliban establish what they consider a new morally pure Islamist state in Afghanistan. And although it is impossible to predict with certainty whether this will be an effective narrative for recruitment, it demonstrates that Al Qaeda appears to remain committed to attacking the U.S. two decades after 9/11.